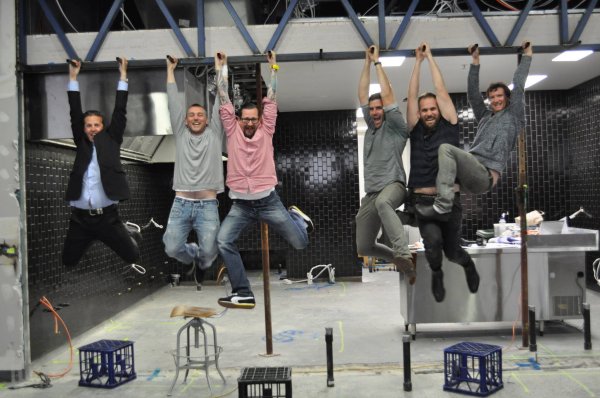 Brothers Peter and Michael Harrington, co-owners of Sage Dining Rooms in Braddon and the soon-to-open Akiba restaurant in Civic, have a passion for good food and hard work.

They grew up in the kitchens of their parents’ many Canberra restaurants, and started working as kitchen hands on the weekend at age ten.

“It was all we ever knew,” Michael says. “We had a good childhood and got a lot of experiences that other kids didn’t. We developed a good work ethic from a very young age. On Sundays, we’d get up and wash dishes all day.”

In their late teens, Peter and Michael left Canberra to work in restaurants including Tetsuya’s, Aria, Forty One and Star Anise, returning to Canberra in 2004 to open their first restaurant, Pangea. They purchased Sage in 2006, transforming the quaint brasserie into one of Canberra’s top restaurants with a focus on local produce.

“Sage is a bit of an institution. It’s one of a small handful in Canberra. You see things come and go, and we’re here because whoever comes into work at Sage has to be a part of our vision,” Michael says.

Sage has its own farm where it raises cattle and sheep and grows organic herbs and vegetables. This Thursday Sage will also host a Collective Dinner together with four of Canberra’s local regional farmers who will showcase their produce and educate guests about the ‘paddock to plate’ process.

Michael and Peter’s latest endeavour is an Asian-style restaurant called Akiba, named after the Japanese fire deity and Tokyo’s electronics district. Peter says the restaurant, which is due to open in early December at the old Dieci e Mezzo site in Civic (the above photo is Peter, Michael and the Akiba team at the future restaurant site), is “the culmination of all of our ideas into what we’d like to think is the most exciting thing to ever happen in Canberra hospitality.”

“We’ve got a charcoal oven, a raw bar out the front where we’re going to serve oysters, seafood and sashimi, and a flat grill. We’ll have a dim sum trolley going around with food like yum cha, and then we’ve got a 12-metre bar where we make our own sodas and have a really great cocktail program,” he says.

Peter and Michael have also assembled an A-team of bartenders, chefs and wait staff, including Lee Potter Cavanagh as bar executive. Akiba’s general manager is Thomas Weis, who has managed Bondi Icebergs, Bambini Trust and Pendolino, and its chefs and wait staff have worked in restaurants including Otto, Nobu, Marimoto’s, Testuyas and Quay.

“People say ‘Canberra’s boring; there’s nothing to do.’ We want to create experiences that make people feel alive,” Peter explains, adding that Canberra’s dining scene has grown significantly over the past 18 months.

“Canberra’s dining scene is changing, and it’s because diners are changing their attitudes… We’ve been increasing in business even though other places have opened, and the new places seem to be doing quite well too,” he says.

“More people are going out multiple times per week. If that continues, we’ll turn Canberra into something more like Sydney or Melbourne. If most Canberrans went out most nights of the week, they’d have one of the best metropolitan cities for dining in the world.”

“People love puffing up their chests about Canberra, and we have to keep that going by supporting the industry,” Michael adds.

Andrew Brettargh - 25 minutes ago
Multi story and solar panel the top.. pays for itself.. View
Tom Adam - 3 hours ago
Why won’t they make it multi storey, instead of stealing parklands?? Not a wise investment.... View
Steve Herczeg - 7 hours ago
I've always wondered why there's a statue to celebrate single mothers at the top of the street. View
Property 36

Elroy Jones - 46 minutes ago
If you'd like to live in a rural setting then perhaps consider moving away from the city. View
Property 5