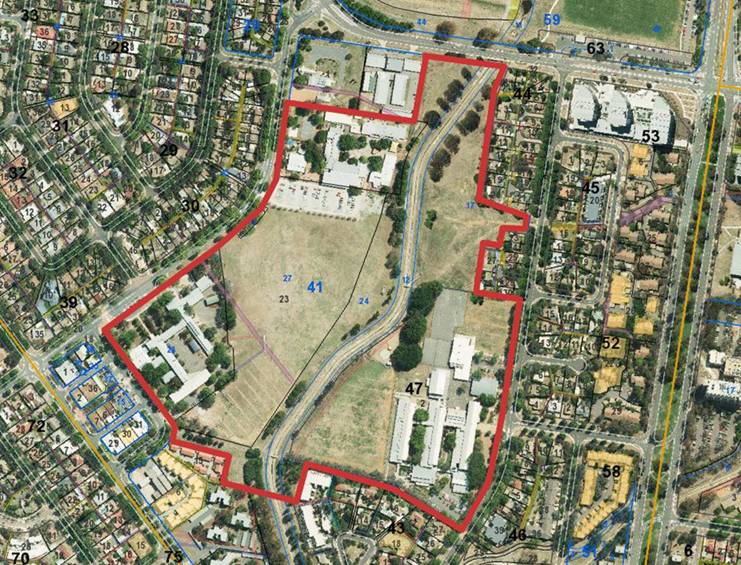 The Lyneham Oval, showing the public primary and high schools and Brindabella Christian College on the top left. Image: Supplied.

After several years of disagreements with the Brindabella Christian College, members of the local Lyneham Community Association are perplexed by the ACT government’s reaction to what they claim are multiple breaches of planning regulations and a lack of enforcement.

The trouble began in 2014 with the school’s plans to build a multi-purpose sports facility and adjoining carpark that would sit on part of the Lyneham Oval. In exchange for building on community green space, the school had offered to significantly upgrade the remaining oval area.

But an ACT government survey of local residents spearheaded by Greens MLA Shane Rattenbury found that over 60 per cent of residents were opposed to the plan, citing strong concerns over private use of public land and the loss of community green space.

Brindabella Christian College has embarked on a significant building program in recent years as the school grows.

But Lyneham Community Association president Trevor Vickers has told Region Media that issues continue with both the school and the ACT government over multiple trees removed by the school during its recent expansion, carpark usage and alleged breaches of the school’s development application.

“Most worrying is that the government doesn’t seem to be interested in enforcing laws that we have,” Mr Vickers said. “The LCA thought that removing 13 trees without permission on the site should result in a fine of at least $80,000, but the resolution of that is that the minister has added a requirement to the development application to say they must plant four more trees.

“The other issue was a sublease on what they use as a car park. We discovered that the lease and purpose clause says it’s for an outdoor sports facility and an ancillary carpark. There’s just a carpark on the site, no outdoor facility and we argued to the government that if you don’t have the facility you shouldn’t have the carpark.”

Although the Lyneham Community Association is not a party to the sub-lease and the ACT government is therefore not legally obliged to reveal details of the sublease arrangement, Mr Vickers says they feel that the government has a responsibility to do so.

“The Government goes on and on about transparency and how important it is to them. Here’s a chance to prove its value,” Mr Vickers said.

The Lyneham Community Association also believes that the College’s new building is set closer to the western boundary than the DA allowed. Mr Vickers said the LCA has had very limited contact with the school itself, although Brindabella Christian College had agreed to stop restricting access to a carpark that is a public space.

“Brindabella seems to feel it has some entitlement to Lyneham’s public space,” Mr Vickers says. “Does any other developer cut down trees without paying the price? If any of us did that without permission, surely we would be fined? We expect that if we see a business like Brindabella doing the wrong thing, we should be able to get the government to do the right thing and apply the law to them.”

Brindabella Christina College declined the opportunity to comment on this article.

My child goes there… can’t wait to get her out. It doesn’t surprise me at all that BCC is treating the public like this, as it’s how they treat the parents and the kids. I’d pull my daughter out now, but she’s just been offered another school at the end of next year so rather than changing friends etc, we’ll deal with the poor facilities there so she can keep her friends.

Are most of these comments even serious. Veronika Sain said why focus on BCC when there are so many bigger issues in the suburb.

And would they stop advertising so much? Almost every bus in Canberra has an advertisement for them, they can't be that desperate for students

Something also needs to be done regarding the number of self entitled parents blocking traffic on Brigalow St. Surely there must be a Traffic Management Plan. on how traffic turning into the car park is managed and who is responsible. There are 'No Stopping' signs everywhere. however these are ignored. Calls to ACT Govt and Police also get no action.

I live close to there and no one surveyed me so I doubt those percentages are correct. I would understand that drop off and pick up times for the school would be annoying for the neighbours across the street.

But you’d think the drug addicts that walk around and hang out at the lyneham shops near that school development and the lyneham primary school every day and night would be more of an issue for this so called lyneham community association — which I’ve never heard of in the 28 years I’ve lived in lyneham.

Not only that, their students seem to feel they are entitled to 1.5 x the space that anyone else takes up on the light rail by not placing their massive backpacks on the floor while they're standing, and using them as a battering ram when they get off at dickson.

I preume all school kids have large bags and that includes the Lyneham Primary, the catholic school and Lyneham high kids who all get on the light rail. I think that the Brindabella kids wear bright neat uniforms that are easily identified just makes it seem like more.. Lets not pick on kids because they actually wear uniforms. The Lyneham High kids will have same sized bags> But if you ask a Brindabell student to move the bags and they don't their school wil take action, as is policy for most private schools

Yes it's true they all use their bags as battering rams, i didn't mean to imply brindabella was special in that regard 😂

Sadly Canberra has cancelled all the school buses from down that way - forcing the students onto the light rail. At that stop there is Lyneham Primary, Lyneham High, Brindabella, Emmaus and Daramalan - of which is a particularly large school. The trams do not accommodate such large amounts of school children - most need to wait for the full trams to go past before being able to get on safely.

Maya123 - 9 hours ago
Acton, Have you ever voted for Labor? View
Spiral - 9 hours ago
Opposition to same sex marriage (for example) is not exclusive to Christianity. Faiths that are sometimes violently opposed t... View
chewy14 - 12 hours ago
Acton, Except by definition facts don't change. Also, I find your definition of a "conservative" quite amusing. By that defin... View
Opinion 10

Capital Retro - 10 hours ago
That means it will be a Labor/Green government forever and there are signs on this thread that that is no longer palatable. View
HiddenDragon - 12 hours ago
It's not minority government - it's a coalition, with Labor too often following the Greens down the rabbit hole, and the Gree... View
Acton - 15 hours ago
Do you remember Pitch n Putt at Woden? A popular community recreational area. Now derelict and set aside for apartments.... View
Property 12

Capital Retro - 12 hours ago
I did not claim that interest rates cuts only happened now. They have been happening for 10 years and this was the policy of... View
chewy14 - 22 hours ago
Capital Retro, Firstly, most of the interest rate cuts happened well before the current crisis, so you can't just claim your... View
Brenton Higgins - 24 hours ago
Joshua we’ve had two elections on that already. Canberra decided. View
News 47

steve2020 - 19 hours ago
It takes an appreciation of cultures to create a thriving arts community. Looking at the most culturally renowned cities, the... View
ACT Election 33

Narrabundah College’s future in the hands of the community