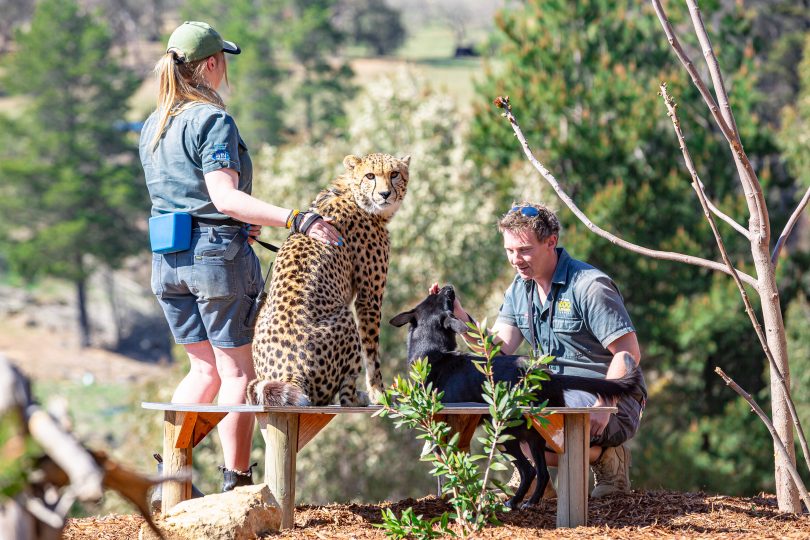 Postal deliveries have been suspended, pools have closed and several major tourist attractions have shut their doors as Canberra continues to grapple with air quality on par with the most polluted cities in the world.

“The safety of our people is our top priority, and with hazardous smoke conditions continuing across ACT, we are suspending all postie and van deliveries until further notice,” Australia Post said in a statement. Customers with enquires about their mail are asked to check the Tracker Tool or contact Australia Post on 13 POST.

“We apologise for any inconvenience, however, we must do what is right for our people. We thank customers for their patience and understanding.”

The National Zoo and Aquarium and Jamala Wildlife Lodge remain open although business manager Russell Jackson said the staff’s first priority was the wellbeing of animals.

“The animals are doing well although, like people, they are affected in various ways,” he told Region Media. “We’ve tried to keep them inside enclosures, to use fans and move them to less-affected areas if possible.

“We’re currently open because we need to care for the animals, so we are still welcoming visitors but asking people to make their own judgments, bearing in mind the ACT Health warnings about hazardous air quality. We did have some P2 masks available for those who wanted them, but we’ve actually run out.”

Major institutions including the National Museum are monitoring the situation and Questacon has opted to shut after struggling with the amount of smoke caused by patrons entering and leaving the building. Both institutions will make a decision about opening each day at 8:00 am, considering conditions.

The ANU also announced this afternoon that its Acton, Mt Stromlo and Kioloa campuses would be shut until Tuesday, January 7 for all but essential staff. A statement said that while there is no immediate threat to the campus, “this is a precautionary measure to ensure the health and wellbeing of our community”.

ANU staff who are volunteering with the RFS will have access to extra leave, and the ANU says it will match the Australian Government’s 20 extra days of paid leave.

One of the risks for major institutions is that a substantial volume of smoke inside the building will set off smoke detectors and potentially activate fire responses.

Cockington Green has also closed and multiple local pools have shut their gates. These include:

Multiple parks and reserves are also closed, including:

Smoke haze from the coast and mountain fires, depending on wind direction, is expected to remain in Canberra for several more days and visibility will continue to be poor. ACT Policing has urged people to turn on their headlights, not just parking lights, and drive to conditions at all times.

That is weird. Can’t imagine it was smoke related. Sky was almost blue today in belco. Best day we’ve had the last week.

Went this morning, for the third time to Belconnen Government shopfront to find it closed but Tuggers, Woden and Gungahlin open – very peculiar. It was obviously ok for me to drive around in the smoke looking for a shopfront to do business which I cannot do on-line. Kaleen post office is open and I do understand why posties are not out delivering.
Lucky there’s no climate change, eh?

Understand all of these but why the post office?

Yes, I understand that and I agree. But how does this apply to inside the post offices?

Life will be funny when as the power stations are gone, only electric cars which you cant charge, rubbish dumps full of electrical appliances no longer allowed to be used like air-conditioners, no more cruise ships, no more overseas travel, it just gets better. I can’t wait. 😊

So stick solar on your rooftops and charge your electric car.

For the rest of it, work on making it better. No one fix will get everything, but anything you do that helps is worth it.

Alexandra Hughes haha, Greta would be so proud 😃😃😃😃

If the government closes it the organisers would be crying for compensation.

The fireworks have been cancelled.

Canberra is currently cocooned by a smoke cloud giving us the worst air quality readings in the world. New Year Eve celebrations were cancelled, public institutions have been closed, swimming centres have been closed and sporting fixtures have been cancelled. And now Australia Post deliveries have been suspended. All of these decisions would have been difficult and should be applauded for putting public health and safety above profit. Then along comes Summernats with their burnouts that pour acrid toxic smoke in the air that impacts on all the people living nearby and no-one says a word … the politicians (all parties) are silent, the media just promotes the festival, asks about the smoke and accepts the response that “it’s just a bit more smoke in the air”! They, along with the organisers are being totally irresponsible. SUMMERNATS BURNOUTS SHOULD BE CANCELLED!

Margaret Collis are they seriously not cancelling them? That is insane!

I call BS on you. As if the organisers are the irresponsible that they would risk fireworks during a total fire ban. You NIMBY boomers are spreading lies and fear. STOP LYING!!

nothing has been cancelled Debbie.

settle down Debbie! No one is lying

Debbie Thomsen it’s on the program

Can you read? If so read this :
Burnouts
Fireworks
In the program
Not cancelled to my knowledge but please correct me if you have any facts to hand rather than abuse

Kerry Hanrahan this is the article about Lakeside Leisure Centre being one of many closures.

Leah Smith this is how bad it is

Is it not irresponsible of the ACT government not to cancel summernats?

Teresa Spedone it is not a Government event. It would be up to the organisers.

I don’t know who can cancel it but there is a responsibility to people to keep them safe and hazardous air is detrimental to health. Canberra is rated as having THE worst air quality inn THE WORLD at the moment. Add to that the heat wave conditions and the number of people fleeing the south coast and the kosciosko national park and tell me that it is not a recipe for disaster.

I’m sure if you enjoy the smoke from burning tyres that you’d not care about breathing bushfire smoke. In fact the bushfire smoke would probably be less harmful 🤔

Teresa Spedone Agree! Agree! Agree! New Year Eve celebrations cancelled. National Institutions closed. Swimming Centres closed. Sporting fixtures closed. They should all be applauded for putting public health and safety ahead of profit. As for Summernats … they and their supporters see burnouts as “just a bit more smoke in the air”! All parties of government are very quiet over this issue, as are the media who don’t ask the hard questions of the organisers. In the current conditions the Summernats burnouts should be cancelled!

Melissa Dunn. The ANU will close until Tuesday