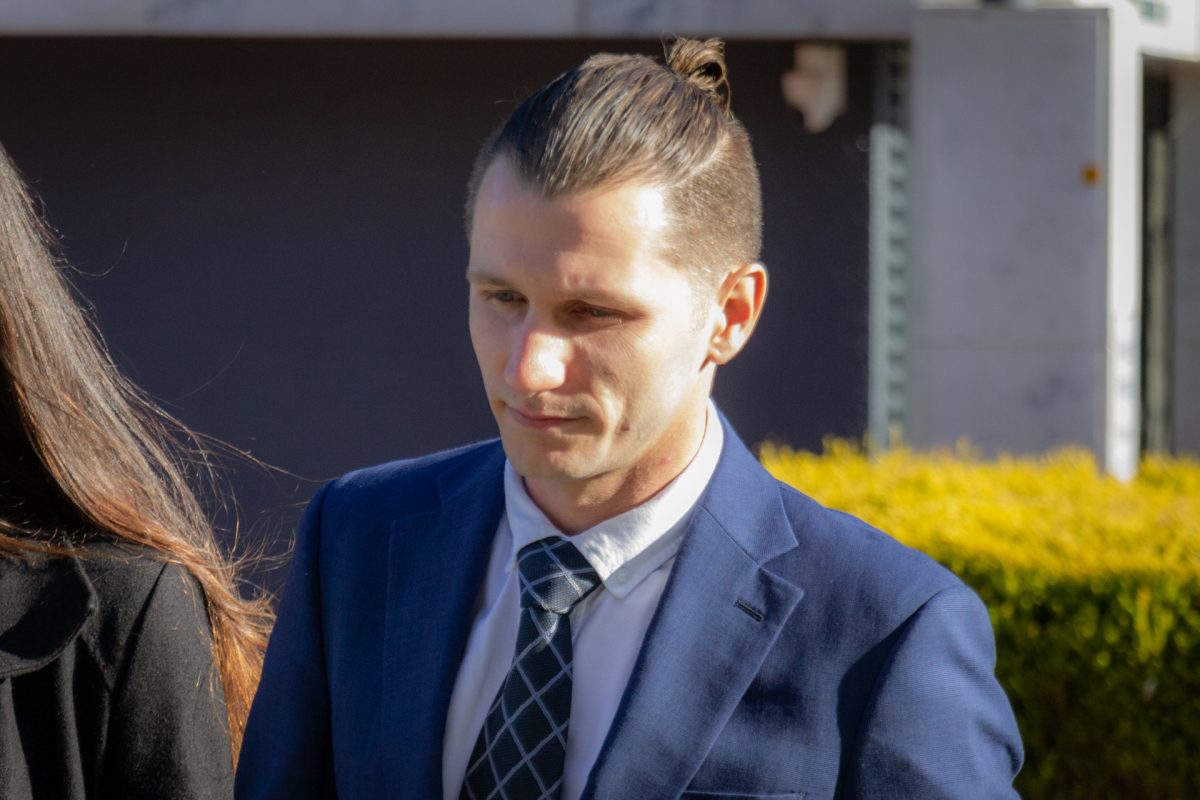 Rhys Karl Kember, 34, approaches court with a group of supporters for his sentencing on Monday. Photo: Albert McKnight.

In the public eye, Rhys Karl Kember was a rising star in the world of elite BMX riding, having competed professionally, performed stunt work overseas, featured in a Nutri-Grain advertising campaign and was on track to compete at the Tokyo Olympics in 2020.

But back home in Canberra, he was committing offences against five girls between the ages of 13 and 16, including two sisters, such as asking four of them to take and send him photographs of themselves in the nude.

He pleaded guilty and on Monday (27 June), ACT Supreme Court Chief Justice Lucy McCallum said he was “manipulative” and had tried to minimise the severity of his offending before she jailed him for eight months.

“It would appear he had the world at his feet, and that is lost,” she said.

She said a report had been provided to the court stating there had been an overly sexual environment in the world of elite BMX riding where riders had multiple partners.

“The so-called groupie culture of the BMX sport does not exculpate him, but it does explain his offending was opportunistic rather than predatory,” the chief justice said.

The first victim was 13 when she met Kember while he was in his late 20s and he began regularly asking her to send him nude photos of herself while they were talking over the social media application Snapchat.

Sometimes he’d make comments like, “If you really care for me, you’ll send me this”. He also directed her on how to take certain photos.

The girl would ask him about his age, but he either avoided the questions or said something like, “my mental age is 18, so technically it’s fine”.

Police ultimately found 43 child abuse images of this girl on his mobile phone.

Kember also asked two 15-year-old girls for photos in exchange for alcohol. When one refused, he went onto her Instagram account, took screenshots of photos she had uploaded that showed her in her swimmers and told her, “you post photos like this, but you won’t even send photos to someone who has been in your life for ages”.

Police found eight photos of her in her swimmers on his phone which were classified as child abuse material.

Regarding the other 15-year-old, he proposed she perform sexual acts in exchange for alcohol.

Chief Justice McCallum said he delivered alcohol to her at her school, but there was no suggestion the sex act proceeded.

“The fact he was prepared to deliver alcohol to a 15-year-old at school during a school day is troubling in the fact that it indicates a corruption of youth of a different kind,” she said.

Another girl was 16 when Kember initially encouraged her to send him an explicit photo, but she laughed it off. He continued to ask, while also sending her naked photos of himself, and police found four child abuse images of this girl on his phone.

She gave a statement to the court in which she said she had trusted him, but that trust was now lost, as was her trust in the therapy she needed to help her mental health.

Lastly, Kember asked his final victim, who was the 14-year-old sister of one of the previously mentioned girls, about her sex life over Snapchat.

He asked her if she sent “nudes”, to which she replied she didn’t because she was “not like that”, and he also told her that her sister had exchanged such photos with himself.

Chief Justice McCallum took into account his prospects for rehabilitation and sentenced him to a total of three years’ jail. However, he will be released on a recognisance release order in February 2023 after serving eight months. He must then follow good behaviour obligations for two years.