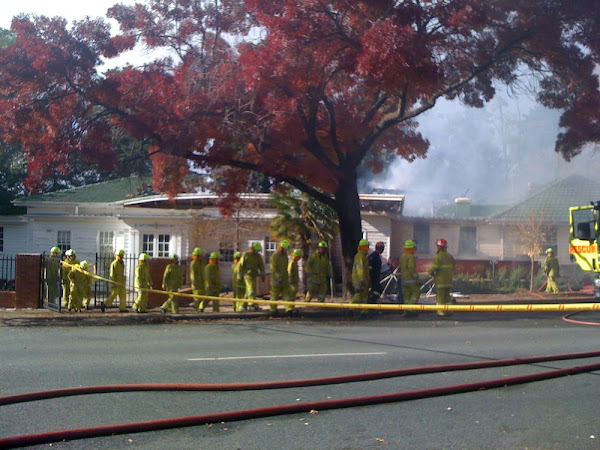 ACT Fire Brigade on scene at a fire at Canberra Services Club on Canberra Avenue at Manuka.

Fire crews on scene confirm the Canberra Services Club next to Manuka Oval is well involved with extensive smoke coming out of the building.

Fire has now fully engulfed the timber building and the roof has collapsed.

There is currently no risk to any nearby properties at this stage including Manuka Oval.

ACT Policing have closed some roads around the scene.

Firefighters are continuing to extinguish the fire.

The building has been completely destroyed.

The ACT Fire Brigade is unable to estimate the damage cost due to the historic nature of the building.

The cause of the fire is unknown at this time.

If you have pictures or video please send them in to images@the-riotact.com .

UPDATE: aussielyn has sent in these archival pictures: 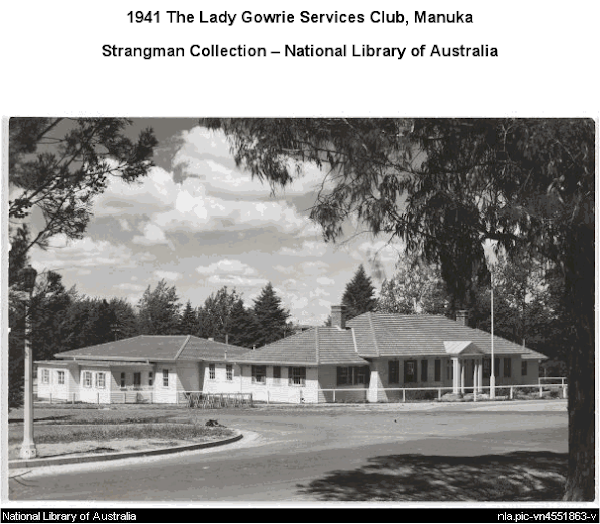 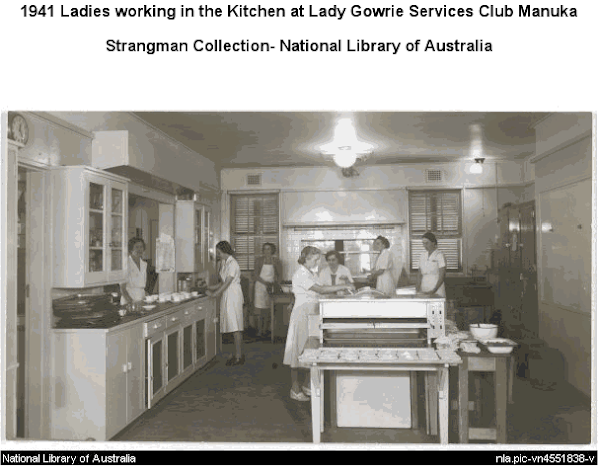 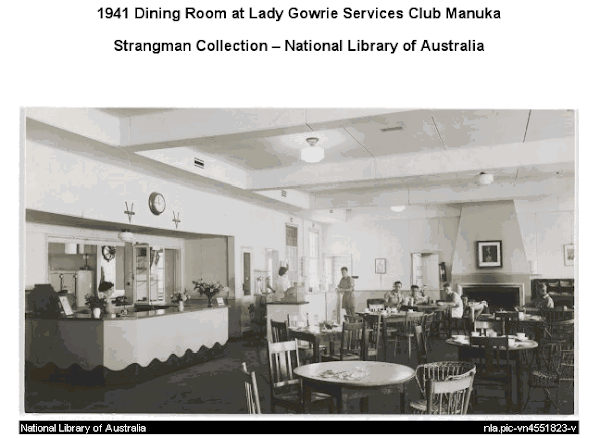 Eddy has sent in this picture and the one above with a note: 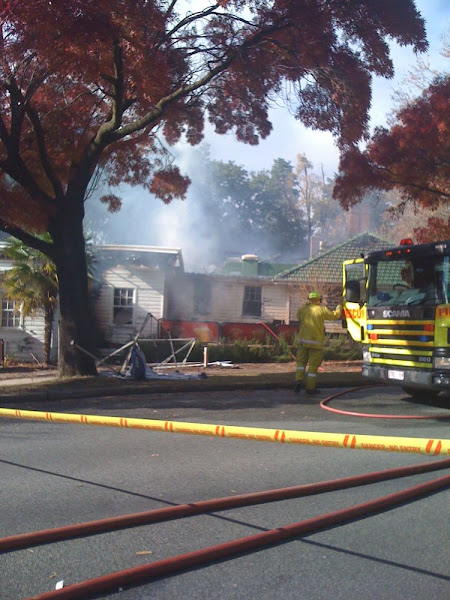 Aside from being crook, I was rudely woken by the smell of smoke in my house, which was (and still is) emanating from the Services Club, two doors away from me. As you’d no doubt be aware (I think my housemate Jon sent you a pic, too), the Club burnt down this morning.

Apparently the firies turned up at 5.50am. At the peak of things one of the witnesses I spoke to said she counted 60 of them. There appeared to be every tanker in the ACT there, including the big arse crane thing trying to get to it from above. Alas, it’s definitely a write off. The outer walls are intact, but the roof’s caved in and it’s farked inside.

I overheard old mate who runs the show (or maybe is on the board-I’m not sure) saying that if there’s anything salvageable from the club the fire brigade have offered to store stuff around the corner in the Fire Brigade Museum (equidistant from my house in the other direction–both the club and the museum are one yard away from me).

As an aside, I’m now worried about the rather tame bunny rabbit that lived under the verandah at the Club. It was rather cute, and regularly grazed on my nature strip. I’m less worried about the possum that apparently lived in the roof.

Jon has sent in this one: 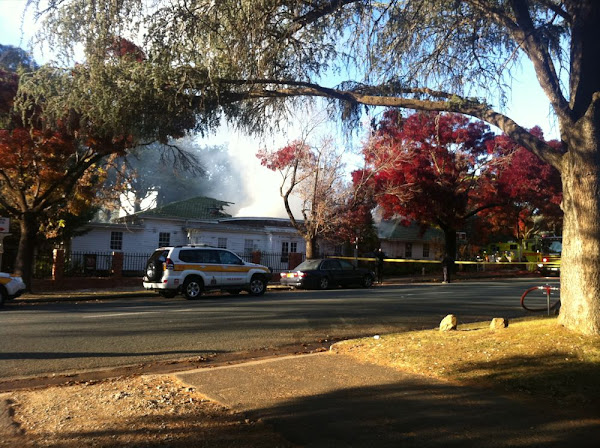 If they dont go in and start demolishing straight away, I think theres a good chance some of the external fabric of the building can be preserved, and reused. The St Kilda pier building was burnt to the waterline, and rebuilt using traditional methods to the original design. Wooden structures do have a unique charm, and that was definitely part of the Services club. So much of Canberra and esecially the older parts have gone that this would be a good opprtunity to restore an iconic building, instead of bulldozing and replacing with another slab tilt concrete monstrosity.

“I bet the developers are licking their chops this morning.”

They can lick all they like. They don’t know who actually has the controlling interest in the club and the building

Very sad. The architecture is very much “pre-war” Canberra. Examples in Liversidge St and the ANU – which were the Canberra Hospital before Acton peninisula, and afterwards the “Nursery School”. My memories of the Lady Gowrie Hut (as it was then called) include a Red Cross fete where my mother bought me a toy train engine made of a brightly painted tin can and odd bits of wood, a fabulous present for a small boy in the time of war.

Developers rubbing their hands, hey? More to the point, I wonder if any have been busy washing them this morning.

Couldn’t agree more – hope the forensics find the b…’s who did this, lock them up and throw away the key – and if they get away with it and try to “develop” the site, let’s hope there will be a permanent community group set up to blockade and make their “construction site” hell. They deserve to have their houses – which are no doubt in leafy suburbs – built out by high-rise apartments on all sides.

Horrendous – such a loss. Devastating for Canberra.

It will be interesting to see which developer builds there. Hopefully it will be dynamited serially until they give up.

Developers rubbing their hands, hey? More to the point, I wonder if any have been busy washing them this morning.

But I fear that we will be treated to yet more office space or “affordable” apartments.

This sort of thing use to happen quite frequently in Brisbane. A lot of heritage buildings were lost. Do I sound cynical ?

What a bloody shame. One of the last remnants of how the town used to be. I bet the developers are licking their chops this morning.

This is really tragic.

I’ve spent many a great time in the quaint old club.

+1 it had an appeal that is sdaly lacking in most watering holes.

This is really tragic.

I’ve spent many a great time in the quaint old club.

Don’t need to worry about herritage listing before selling to developers now. Just like the insulation factory that won’t have to wait for compensation from the Commonwealth anymore.

Boo hoo best ‘old’ drinking hole in Canberra gone, many happy gatherings there over the years now just memories. The Firies were there till late last night for a function and then had to come back at 6
We’ll be lucky to get it replaced, the developers are calling the RSL right now I imagine

Tragic. Possibly one of the best kept secrets in Canberra.

Here’s hoping we don’t have a serial arsonist in the making. Two major blazes in unoccupied buildings in as many days.

I know it is early days but I hope that there will be a replacement building of some sort built. The Club hosted a lot of meetings and, with the passing of the RSL in Civic, filled an important hole in the community.

But I fear that we will be treated to yet more office space or “affordable” apartments.

Please say it isn’t so. This is (was) such a top place to have a couple of sneaky ones away from the Manuka crowd.

Finally Relented - 28 minutes ago
Ashley Wright yeah. Know that. Lived here all my life pretty much. They don't work any more. Much better 10-20 years ago. Pla... View
Ol L - 18 hours ago
Maybe if we do nothing another government will be in power when it all blows up, so let’s do nothing in the meantime View
Ashley Wright - 18 hours ago
Sally Greenaway found the article. https://www.cityservices.act.gov.au/roads-and-paths/traffic/trafficsignals/drakeford_drive... View
News 51

Ian - 11 hours ago
This opens an interesting idea for industrial action. Everyone turn up at the same time on the same time, and overfill the av... View
Adam Jovanovic - 11 hours ago
Depends on the person. If works pretty much your only social life then yes it will be hard and your going to have to make an... View
Helen Prior - 13 hours ago
Not only has the human factor gone from work place, it is disappearing from from all over Canberra. View
News 23