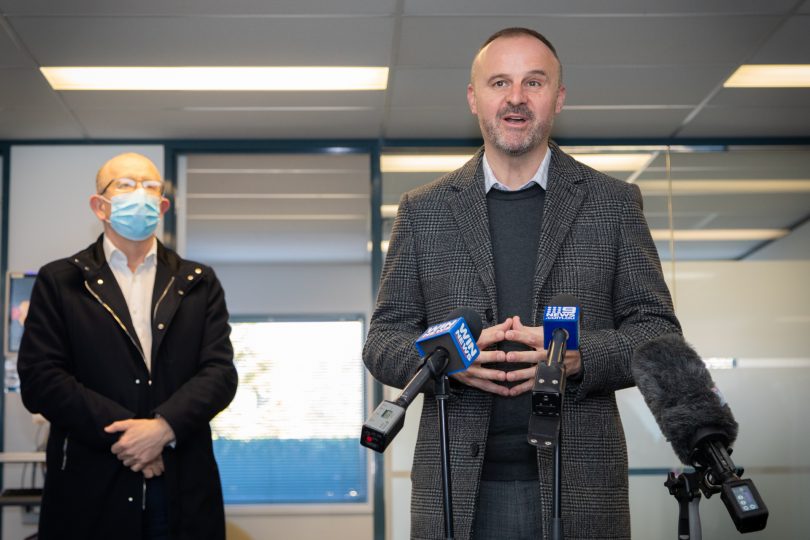 The ACT’s mask mandate will end at 11:59 pm on Friday (9 July), despite the NSW lockdown being extended by a week until 16 July.

Those subject to stay at home orders are able to leave after 14 days since the last time they were in the Greater Sydney region. Less than 50 people are quarantining in the ACT after visiting a domestic exposure location.

Around 6400 people in the ACT are currently subject to stay at home orders because they have been in the Greater Sydney region in the preceding fortnight, but this is down significantly from more than 10,000 last week.

Chief Minister Andrew Barr said the decreasing number of people travelling between the two capital cities, coupled with no seeding of the virus outside Greater Sydney, meant health authorities were comfortable removing the mandate.

Mr Barr urged Canberrans to use their common sense when travelling and attending public gatherings. He is encouraging mask use where people cannot socially distance or during places of prolonged exposure, like public transport.

Mr Barr also said conversations had been progressing regarding an expanded vaccine rollout that would include workplaces after the issue was raised at last Friday’s National Cabinet meeting.

“In thinking about a business or workplace rollout, the public service, defence and universities would be a good place to start in the ACT,” he said.

“As we get more vaccines, we will be able to get them out to more people, more quickly.”

Although arrangements for the workplace rollout are not clear, Mr Barr suggested that the Commonwealth may contract out the vaccination to a third-party provider as occurs with flu shots. Discussions were also needed for universities which are “semi-government, semi-private”.

“I took the opportunity to remind the Prime Minister that the Australian Government employees one in four people in the workforce in the ACT and the defence and university sector also cover a large number of younger people who are not currently eligible for vaccination.”

The rollout of the defence sector would remain under the remit of the Coordinator-General of Operation COVID Shield, Lieutenant General John Frewen.

The vaccination of people under the age of 40 was again brought up after NSW Health Minister Dr Kerry Chant revealed that 14 out of 37 hospitalisations in the state are under 55.

She said this should dispel the myth COVID-19 only affects older people.

Eight people in hospital are under the age of 35 and of the seven people in intensive care, one is aged in their 30s, one in their 50s, two in their 60s and three in their 70s.

Mr Barr said this highlighted the need for public health measures to protect the entire community, not just older Australians.

“Older Australians are more at risk of severe disease and death than younger people, but younger people can still get sick and die,” he said.

“The rationale for the rollout of the vaccine program has been to focus on those most at risk. We would love to vaccinate more people, but we are running our program full tilt … until more supply becomes available.”

Good to see the Chief Minister recognising the vulnerability to COVID of people over 60 years. Could he please advise when and how Pfizer or Moderna will be made available to what appears to be a large cohort of that age group not willing to risk vaccination with Astra Zeneca. Social media indicates this could be a huge issue but governments are not publicly addressing this matter. All concern seems to be administering vaccine to young cohorts not as at risk of COVID.

And if anyone in that age group is worried about getting COVID then it is up to them to weigh up the relative risk of getting AZ vs getting COVID.

Should the government respond to irrational beliefs?

If you’re actually worried about the risk of COVID (which is reasonable), you would be jumping at the chance to get AZ.

Dear Chief Min .. Kindly notify South Australia of the mask lifting. They may then allow us to enter their state.

No they won’t. Apparently we are too close to Sydney so are an equal risk. Mask or no mask. Weird I know.

Can highly recommend the deserted beaches and uncrowded eateries of Jervis Bay and the south coast. Enjoy the Sydney lockdown while it lasts.

JC - 10 hours ago
Problem with the medical world is balance or probabilities doesn’t cut it. How many times do you read of people who have be... View
JC - 11 hours ago
The only problem with your theory and quoting the average age of deaths, is those deaths have happened in an environment of r... View
phydeaux - 13 hours ago
While reading here, I noticed that among the usual weird facebook views there was a journal reference, so I looked it up. Dea... View
News 39

Mask mandate to stay in place for at least another week, additional Pfizer stock flagged