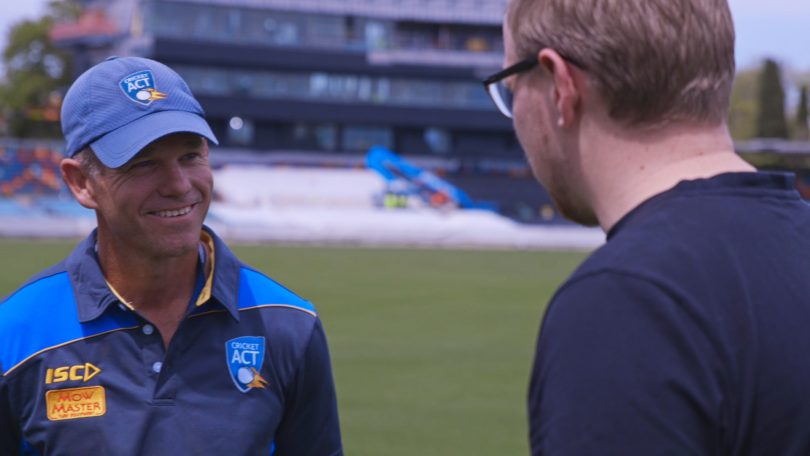 As anticipation builds for Canberra’s biggest summer of cricket, think of the man behind the scene who is tasked with one of the most important jobs this summer.

Brad van Dam is the head curator of Manuka Oval and he is entrusted with the task of making sure Canberra’s premier cricket venue is ready to host two Big Bash clashes, a PM’s XI match and its maiden test match between Australia and Sri Lanka.

As anticipation builds for Canberra's biggest summer of cricket, think of the man tasked with arguably its most important job.Brad van Dam is the head curator of Manuka Oval and he is entrusted to make sure Canberra's premier cricket venue is ready to host two Big Bash clashes, a PM's XI match and its maiden Test match between Australia and Sri Lanka.

Mr van Dam has perhaps one of Canberra’s best offices at Manuka Oval during the summer, where he and his four-man staff had been working to have the oval looking it’s best and ready for the PM’s XI which takes place next Wednesday (31 October).

This summer won’t just be a historic summer for Canberra but also for Mr van Dam, with the Australia vs Sri Lanka test his first as head curator.

“This is very exciting for me and for the boys here,” Mr van Dam said. “Its the pinnacle of the sport and to produce a test match pitch as the head curator is a major milestone for me.”

Having worked as an apprentice at Sydney University’s oval and the SCG before moving to Canberra to take on the job as head curator at Manuka, Mr van Dam has been in the industry for nearly three decades.

From checking the temperature underneath the pitch, to cutting the grass to the perfect length, to creating a pitch that has just enough tinge of green, as well as keeping tabs on the weather to make sure the pitch and outfield are not damaged, Mr van Dam and his team have a variety of roles to make sure Canberra’s summer of cricket runs as smoothly as possible.

There is a lot more to being a curator than one might think at first glance, and it is definitely more technical than a man with a hose and lawnmower.

“I always say to the guys that we have an important job protecting million dollar players when they come to play on this ground,” he said. “When Australia played India here in 2016 in ODI, there was million dollars worth of players on the field. Imagine what would happen if one of them got injured due to the surface?

“You’ve also got to love cricket because you watch a lot of cricket and you’re on the ground more than the cricketers. Once the game starts, I am on the sideline watching the match just in case anything happens to the pitch that needs to be fixed.”

While it is the first time Manuka Oval has hosted the pinnacle of international cricket, Mr van Dam fears the upcoming test match will be the only one in Canberra for some time due to scheduling reasons but crosses his fingers that it will someday return to his ground.

“Six tests in a summer normally happens once every three or four years in Australia, and then it depends if we get the test match or Hobart gets it or somewhere else,” he said. “We are going to make this test match the best we can make it and see what happens in the future.”