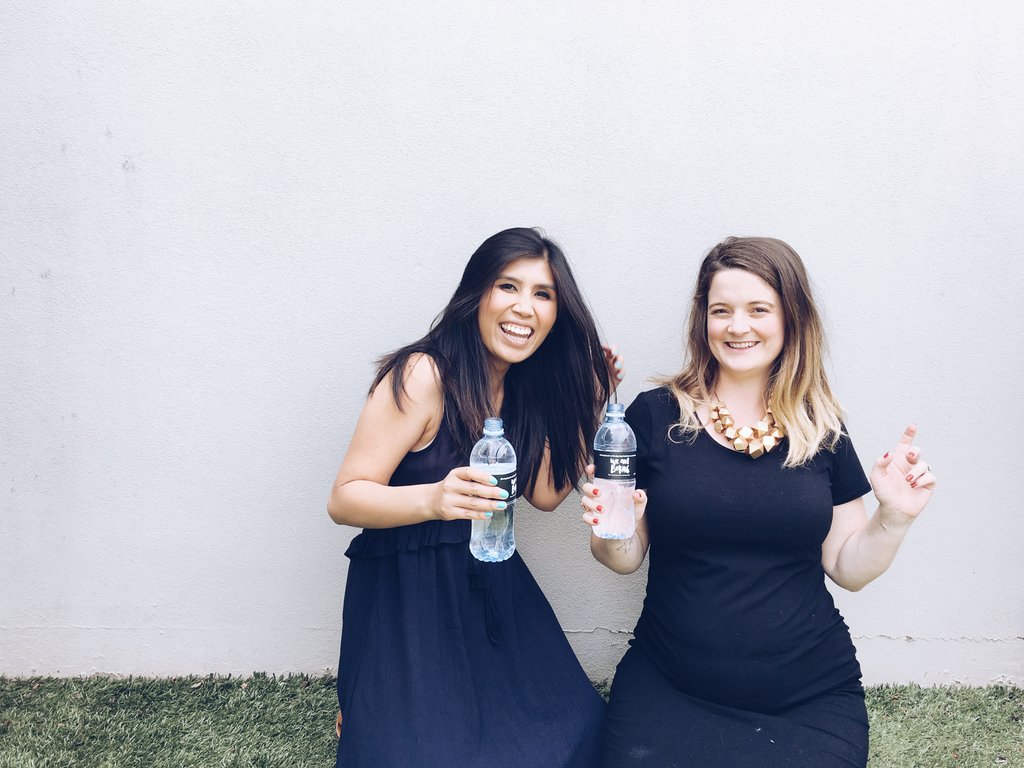 Ever started a conversation with the phrase “don’t blame us, we just live here,” when describing our fair city? I know it’s something I used to be guilty of, but as I’ve grown and dare I say matured, I’ve taken more and more opportunity to appreciate what Canberra has to offer, and I know two other great ladies who have too. What’s more, they are now giving back to the Canberra Community in a big way.

Long time Canberrans and best friends Emma and Soud are the proud initiators of not for profit company We Ain’t Boring. This new little company, that is growing by the month, sells premium Aussie bottled spring water in local businesses and at events, donating 100 percent of profits to Canberra charities and other not-for-profits.

After three months of trade, We Ain’t Boring has donated a combined total of $1100 to YouthCare Canberra and the Stella Bella Little Stars Foundation.

These same mums were also responsible for last year’s inaugural Spare 10 campaign, where locals were asked to hand over $10 to fund the purchase of thermals, gloves and beanies for Canberra’s homeless. Their original goal was to raise $1000 over one month. To their surprise and delight, so many local’s jumped on board to support the cause, the campaign raised $10,000 in just 3 weeks! The pair were then able to purchase not only a large supply of thermals, but also 120 sleeping bags for locals doing it rough. “Spare 10” has just kicked off for its second year. 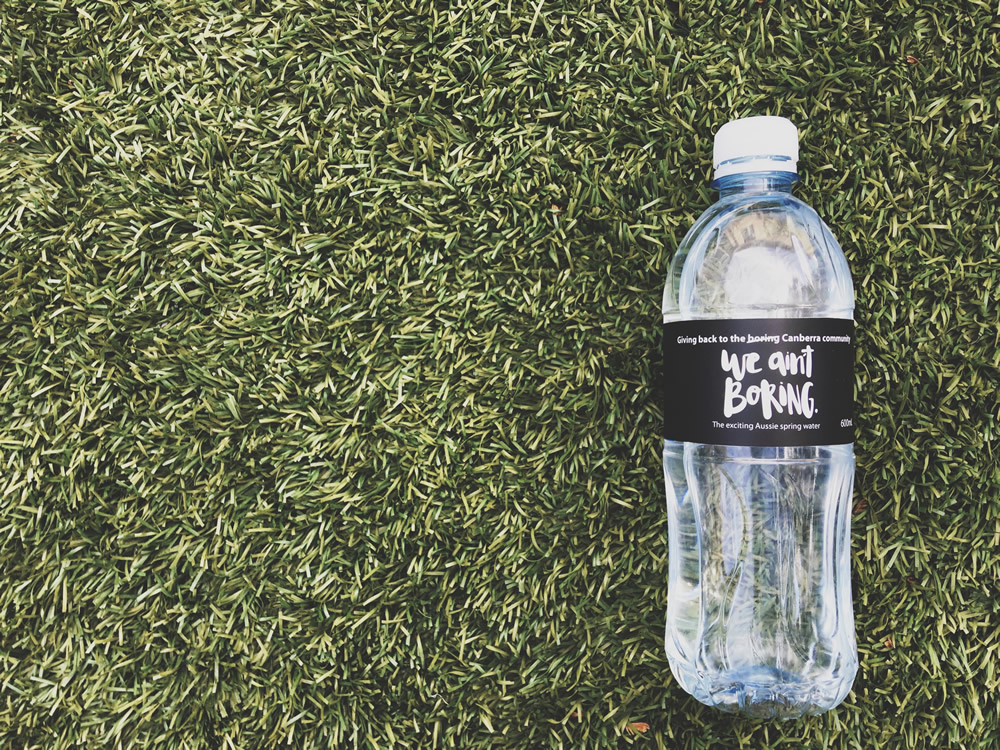 After last years success, this year they have set their sights a little higher. With more outlay both financially and personally, these two local mums started up We Ain’t Boring to further support the Canberra community.

And what would inspire two young mums with five kids between them (one being welcomed only ten weeks ago), to give so much back to the Canberra community? Well, to quote co-founder Emma Madsen, “We believe by supporting, funding and raising the profiles of such important local services, we’re helping to improve the quality of lives right here in our own backyard,”. Emma who sadly lost her beloved Mum, Jill to brain cancer in 2014, has the biggest heart around, and Soud who also looked to Jill as a mentor, is a straight talker who wears her heart a little further up her sleeve, but it comes out in spades. 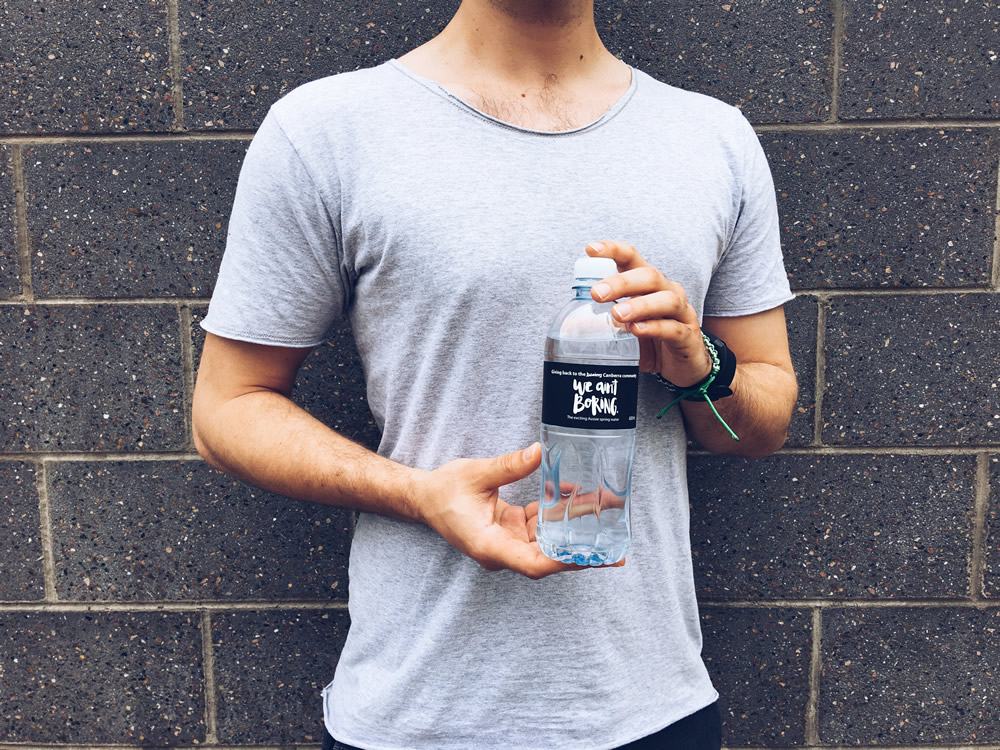 Currently, the bottled water is sold wholesale to local cafés, supermarkets and events. These businesses then resell the water and make a profit for their own business too. “After we cover our business costs, we then donate every single cent left”, said Co-founder, Soud. Local residences are also able to order cases online for their home or private events.

Emma and Soud ask their stockists to take turns in selecting a local organisation, program or service close to their hearts. This model means donations are reaching as many different services and organisations as possible.

So next time you’re telling someone about where you’re from, tell them with pride. “I’m from Canberra, and We Ain’t Boring” and tell them about how we look after each other!

While not discounting their fundraising aims I really cannot see why we need more plastic water bottles. There is already too much plastic waste on the planet.

Water out of a tap is about half a cent for a litre. And it hasn’t been stored in a plastic bottle, leaching who knows what into it.

While not discounting their fundraising aims I really cannot see why we need more plastic water bottles. There is already too much plastic waste on the planet.

This isn’t a charity is it? They are a Pty Ltd.

Buck Johno - 5 hours ago
From what I remember of night rider busses it was only over summer. View
PE TE - 14 hours ago
Sean Bishop but the Uber rapes have increased View
Property 29

Capital Retro - 9 hours ago
Violent home invasions targeting keys for owners' luxury cars are now out of control in Canberra. Very few details are subjec... View
Daniel Lesky - 11 hours ago
Jason Malcolm could be worse not like she needs to go to charnwood View
Lisa LaMaitre - 15 hours ago
No-one pays attention to crime in Canberra until it impacts them! We closed a Gungahlin based business over 10 years ago afte... View
Lifestyle 1

dolphin - 10 hours ago
love her work all along the light rail. Canberra is a fabulous place for public art.... View
Property 29

George Frilingos - 11 hours ago
Angelina Mamatas are you still interested? Huge investment. We would need a great business plan, and with people not able to... View
Tiana Jai - 12 hours ago
Dave William got a spare 6mil? View
Kara Youngentob - 13 hours ago
Alison Procter, it depends on how many people interested. Ideally, somewhere in the 750k range. It’s 31 acres so it would b... View
Food & Wine 25

Lihuan Panda - 11 hours ago
from the conversations and interviews, I think some players chose not to turn up for the briefings and missed out on informat... View
Hugo Walker - 14 hours ago
Penny Ford But isn’t he rich, famous and self-entitled? Surely that should persuade the authorities to cave in to his tantr... View
Pia Kivela - 18 hours ago
Personally we are in a pandemic so we should not be having this tournament View
News 5

@The_RiotACT @The_RiotACT
Looking for a new home you can move straight into? This fully renovated & delightfully styled family home needs no further work and is ready to go https://t.co/YyEAGbNns5 (12 hours ago)

@The_RiotACT @The_RiotACT
A big, green mixed-use development planned for Gungahlin Town Centre may be powered completely by the sun and charge vehicles in the basement https://t.co/JqLOjLL10K (13 hours ago)