Meet the man who never misses a Brumbies home match 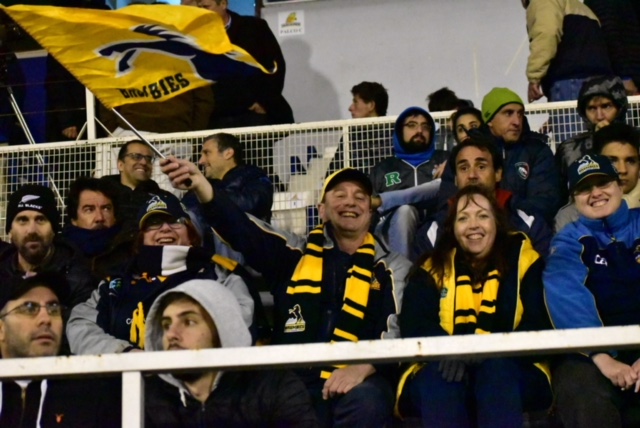 It is a man’s worst nightmare, choosing between a family wedding and a footy match. For Jim Taylor, it was an easy decision.

Jim Taylor and his wife Jody have been Brumbies members since the inception of the Canberra side in 1996 with Jim never missing a home game.

“I (Jody) have missed a few home games, like when the kids have their activities like diving and other competitions, or my sister’s wedding,” Jody laughed.

The Taylor family were invited to Jody’s sister’s wedding and Jody had to tell her parents that they would all be there for the ceremony and reception, except Jim, who would run off to Brumbies match.

“We went to the church and witnessed the ceremony, then Jim starts getting changed into his Brumbies gear in the carpark as all these people were walking out in suits,” Jody recalled.

“People were calling out, ‘Where are you going’ and I told them, ‘I am off to the Brumbies, they’re playing the Bulls,” Jim said, with a grin on his face. “There is no dedication these days.”

“Jim’s life has always revolved around rugby, which is a way of life for him, and people are accepting of the fact,” Jody said.

Jim’s fascination with footy started when he was in grade four at Marist playing rugby for the under-nines. He only stopped playing after suffering an injury in his first season for Royals.

One of Jim’s earliest rugby memories, watching the 5 Nations on his old black and white TV, was the atmosphere and the songs from the Welsh crowd as they supported their national team. He was hooked and wanted his kids to experience the same thing that made him a rugby fan.

“We went to the World Cup in 2007 as a family and we were lucky enough to see the Wallabies play Wales in Cardiff. I said to the kids, ‘You are going to go and I do not care if you don’t watch the game, but just listen to the singing’.”

“I think the kids appreciated the singing.”

When the Super Rugby draw comes out, Jim sits down with the calendar and marks all the games that he wants to travel to. “It’s something we look forward to, watching the Brumbies, catching up with friends and making new friends.”

People ask him why he doesn’t wait until he retires to travel and follow the team. His response is very simple:

“While I am healthy I can do it, I have seen people when they retire, they don’t get out to the games due to ill health. We get to see places we would never have gone to unless we follow the Brumbies.”

“The way I see it, I see the Brumbies are our team. It is part of us and whenever they play, they are representing us. We celebrate every win and suffer every loss as the players do,” Jim said. 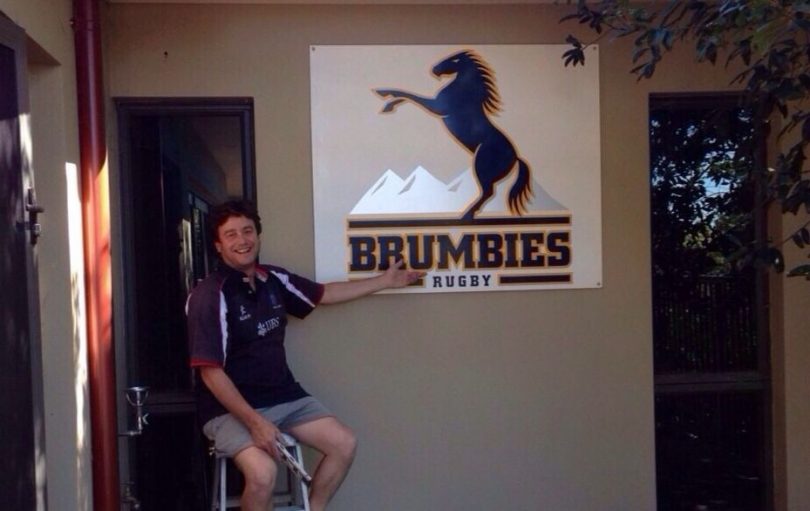 Jim can remember every match that the Waratahs and Brumbies have played against each other at Canberra Stadium and can recall why the rivalry started in the first place.

“The rivalry didn’t start with the Brumbies and Waratahs, it has been a long saga. Canberra has always been treated as the little brother by NSW. We were never good enough in their eyes.”

“I think a big part of the rivalry for the Brumbies now is that so many Canberra players initially weren’t wanted elsewhere. So the Brumbies were really a team that others didn’t want in their franchise so they had something to prove.”

“David Knox, the wizard of deception, was in the twilight of his career when he came to the Brumbies, unwanted by the Waratahs. The game against the Waratahs back in 1997 will be etched in my memory until the day I die. It was one of the greatest ambushes ever witnessed. Knoxy had the ball on a string, weaving his magic, setting up multiple tries and kicking goals from everywhere.”

“Wouldn’t it be great to see Canberra fill GIO Stadium, all wearing their colours, waving their flags and singing their hearts out to see our Brumbies put another display on like that, and send those Tahs back up the Hume Highway with their tales between their legs?”

The Brumbies are next in action on Saturday 31 March when they face old foes the Waratahs at GIO Stadium. Tickets are available now from Ticketek and memberships are still available by clicking here.

Jim is also a mad supporter of the Canberra Cavalry baseball team. Way to go Jim!

It was a classic Christina Knight

Can’t believe he left our wedding for a football game! I was devastated. 😥

Actually I can’t back that up. Truth is I thought it was hilarious. 😂😂😂

Vicki Dickford - 3 minutes ago
You can't change history it will be the 26th January no matter what so lived with it and enjoy the day... View
Peter Alsop - 54 minutes ago
Your right change it to 20 January. The date the first fleet arrived in Australia.. January 26th isn't even the real date alr... View
Duncan Lennox - 3 hours ago
There is for 98% of the population View
Community 27

David Brown - 37 minutes ago
Karl Brown Clearly it is not identify but where do you think registration, sales tax on insurance, petrol tax etc goes? It go... View
Les Mitchell - 2 hours ago
Jill Worrell I agree. A lot of cyclists do travel too fast on shared paths. If you want to ride fast then use the roads and r... View
Trev Graham - 2 hours ago
Karl Brown yeah right - time for your medicine and a nice cup of Milo.... View
Opinion 52

Norman Stoner - 2 hours ago
Keran Niquet rather than making misinformed comments on Facebook, do a bit of reading on the matter. Have a read of this befo... View
Paul Mathews - 5 hours ago
great. Now need one for BARKING DOGS, eh Chris View
Daryll Rae - 15 hours ago
Mark Katalinic -cyclist by law are under no legal obligation to use cycles paths . View
Opinion 17

Gungahlin residents will be forced to swelter through Canberra's heatwave over the weekend and into next week without any relief...
Opinion 152

@The_RiotACT @The_RiotACT
Heading to the coast? Holidaymakers are being urged to swim at patrolled beaches after the number of rescues on the NSW Far South Coast tripled https://t.co/WXFoOIX5Ut (47 minutes ago)

@The_RiotACT @The_RiotACT
The ACT Government will allocate $300 million in this year’s budget, including $100 for the ‘Big Canberra Battery’ to help power the Territory https://t.co/jGrZzlCkcN (4 hours ago)