Meet the world’s largest knitted kiwi at the Arboretum 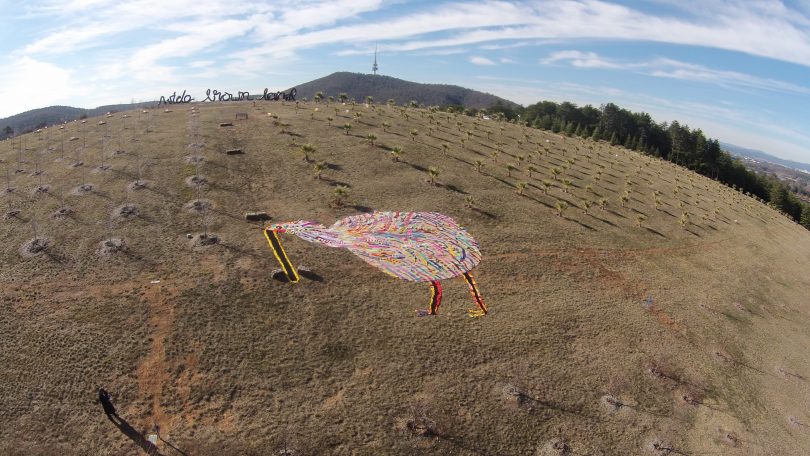 The world’s largest knitted kiwi is on display at the National Arboretum. Photo: Cris Brack.

Measuring 20 metres by 14 metres, the flightless bird is the handiwork of hundreds of volunteers ranging in age from school-aged to 104 and coming from as far away as the United Kingdom.

Located at the Arboretum’s events terrace, the kiwi is a sight to see with its whiskers alone measuring 2.5 metres in length. It is aptly named ‘Mahana’, which means warmth.

Given that kiwis are normally the size of a domestic chicken, it seems that this woolly Aussie version must be on steroids but it is certainly doing its job in promoting our New Zealand neighbours and adding some holiday fun to the Arboretum.

The kiwi bird has gone on display this month as part of the 2018 Warm Trees Installation which includes crocheted ferns, hand-crafted pohutukawa flowers, and the annual display of dozens of colourful scarves wrapped around tree trunks. 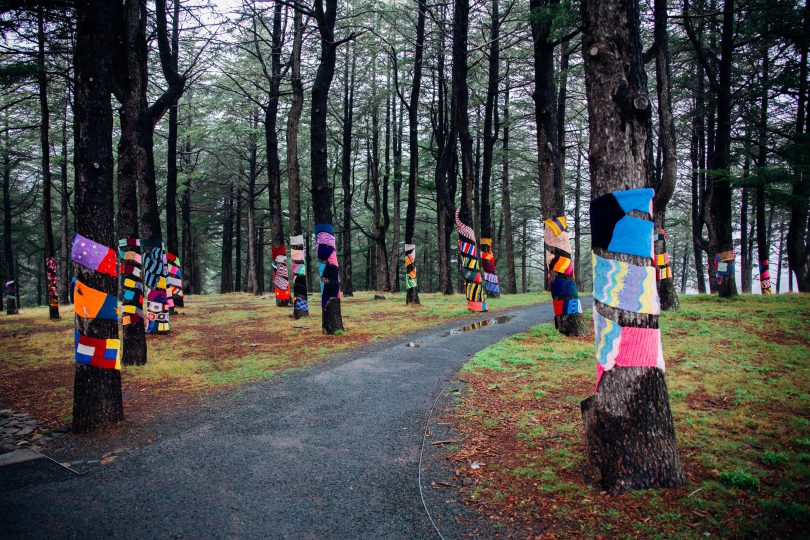 Dozens of colourful scarves are wrapped around tree trunks at the National Arboretum. Photo: Supplied.

The Friends of the Arboretum and the New Zealand High Commission worked together to create the giant bird with a mosaic of colourful scarves.

New Zealand High Commissioner Chris Seed said the High Commission was thrilled to be able to partner with the Friends and National Arboretum in this way.

“It’s not every day you are asked if it is okay to build a giant 20 metre by 14 metre knitted Kiwi at the National Arboretum. This is an exciting opportunity to showcase a little bit of New Zealand at one of Canberra’s leading national attractions,” said Mr Seed.

“We also have a Matariki display inside the Village Centre. Matariki is the celebration of Maori New Year and it is wonderful to be able to share this special time of year for New Zealanders with National Arboretum visitors.”

Venues Canberra director, Liz Clarke, welcomed the partnership which showcases New Zealand’s culture and the work of hundreds of knitters from Australia and across the world.

“Warm Trees has evolved to draw inspiration from a different embassy each year and it’s so exciting to be featuring some of New Zealand’s icons this winter,” said Ms Clarke.

“We have hundreds of volunteers sending knitted goods from across the country, and even as far as New Zealand and the United Kingdom,” Ms Clarke said.

The installation runs until August 5 this year.

During the school holidays, there are related free activities for children to take part in including drop-in knitting sessions and New Zealand cultural workshops, as well as Walking with the Wollemi for $15 per child (aged 7-12). For more information go to www.nationalarboretum.act.gov.au.

Awesome 🙂
I always like the art when those trees are decorated.

You may not believe it but I used to decorate trees.

I think my older brother referred to it as “ring-barking” and he gave me an axe to do it with.

Rather than “warm” trees I would prefer to see mature, green trees; you know, the type you see in normal arboretums.

So do can we claim the kiwi as our own now?

Ivan Peric - 3 minutes ago
Just give every Canberra family million bucks knobs View
Daniel O'Connell - 4 hours ago
Approx $1,000 per resident View
Jorge Gatica - 6 hours ago
This will really help with Canberra’s 0.2 % of Australia’s 1.0 % of the world’s emissions, China ?? 28% of the world’... View
Community 6

Irene Elford - 15 minutes ago
Why is all I can say, if and when they defrost you all your family friends, etc will be gone. View
Katy Did - 47 minutes ago
Rachael Axford for these two I reckon😂 View
Phil Andrews - 3 hours ago
I have a bridge for sale if they’re interested!! View
Opinion 178

Rowan Hartcher - 46 minutes ago
Alan Hopkins like wise View
Peter Quinn - 2 hours ago
So when can we celebrate colonisation????. Whatever day is nominated it will always be contested View
Alan Hopkins - 2 hours ago
its not that hard to change the day. just do it... View
Opinion 24

Bradley Heanes - 3 hours ago
Didn't the defence department already appologise for this? (Even though they were assisting the RFS at the time) Didn't they... View
franky22 - 6 hours ago
Why can't the ADF simply state that they made a mistake. View
Property 13

Julie Macklin - 7 hours ago
Mark Katalinic Likewise why not use the roads for car racing? No, silly suggestion, as is yours. View
Julie Macklin - 9 hours ago
Tim McMahon Well, mine hasn't had a check since they closed the government registration check in Dickson years ago. Yes the c... View
Sport 3

Tramcar Trev - 9 hours ago
Simple do what other regions do, use local volunteers to staff the visitor centre. View
show more show less
*Results are based on activity within last 7 days

@The_RiotACT @The_RiotACT
New figures show public housing has declined in the ACT, but there may be good news coming in the Budget https://t.co/P1qLgyPSFz (4 hours ago)