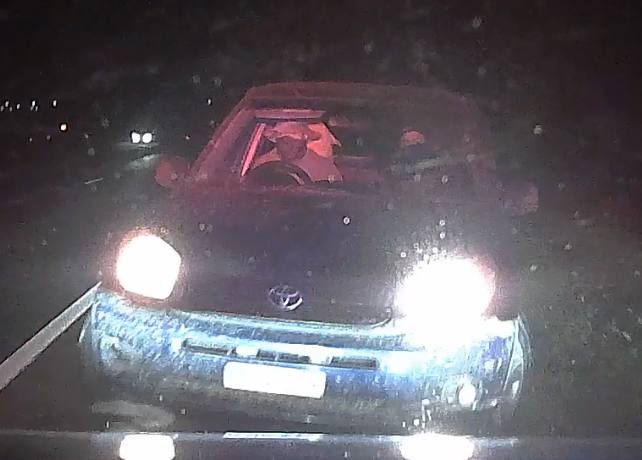 A photo was taken during a car chase after three men were spotted outside a police officer’s house. Photo: Supplied.

Two of the three men charged after a police officer allegedly found people waiting outside his home before they chased him through Canberra have been committed to trial.

While some charges were withdrawn against John Brendan Khan and David Robert Miller on Thursday (27 October), they maintained their not guilty pleas to others and their cases have been sent to the Supreme Court.

Documents previously tendered to the court state the officer had just driven home early on the morning of 18 August, 2022, when he saw a Toyota RAV4 parked outside with three people inside wearing face coverings.

The RAV4 quickly accelerated away with its headlights off. Worried that the occupants could be targeting him due to his job, the officer followed.

Eventually, the tables were turned and the officer pursued the RAV4 with the support of other police, but it allegedly crashed into his car on Horse Park Drive in Kenny, rendering his car immobile, before coming to a stop.

Khan, Miller and 29-year-old Bradley Clyde Booth were arrested and are alleged to have been involved in the incident.

Police alleged Booth was the driver, 34-year-old Miller, of Spence, was in the front passenger seat and 32-year-old Khan, of Rivett, was in the back.

On Thursday, charges of dangerous driving and failing to stop for police by joint commission, which had been laid against Miller and Khan, were withdrawn and dismissed in the ACT Magistrates Court.

However, charges of using an offensive weapon by joint commission as well as participating in a criminal group were committed to the Supreme Court for trial by Magistrate James Stewart.

They also pleaded not guilty to a charge of intentionally attempting to use an offensive weapon that was likely to endanger human life.

Miller’s bail was continued, while Khan is in custody. Their cases will first appear in the higher court on 10 November.

Booth has previously been refused bail and his case was adjourned on Thursday.