Michael Bolton: One World, One Love 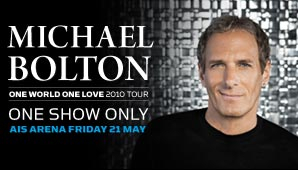 For the first time in 17 years, Grammy award-winning vocalist, Michael Bolton, is coming Australia. He is currently touring throughout America and Canada on his, ‘One World, One Love Tour’.

Michael Bolton is best known for his big ballads, tender vocals and timeless hits including ‘’When a Man Loves a Woman’, ‘How am I Supposed to Live Without You’ and ‘Time, Love and Tenderness’.

Michael Bolton has sold more than 53 million records world wide and earned a star on Hollywood’s Walk of Fame. He has sung with Luciano Pavarotti and Ray Charles, written songs with Bob Dylan, Ne-Yo and Lady Gaga, penned hits for Barbra Streisand and KISS, played guitar with B.B. King and had his music recorded by hip-hop superstar Kanye West.

This year, Michael Bolton released his 18th studio album titled, ‘One World, One Love’. The album features collaborations with Ne-Yo and Lady Gaga.

The tour will feature the greatest hits along with a selection of the new album.
Michael Bolton’s passion is undeniable and his voice is unmistakeable – don’t miss out!

The album, ‘One World, One Love’ is out now through Universal Music.

The Riotact have 3 double passes to giveaway at a value of $240 each, to win tell us in 20 words or less your most romantic experience, keep it clean!

Congratulations to our winners, Angie, Cristina and Neil.

tim_c - 8 minutes ago
It doesn't matter how much the fine is when there's such a low risk of actually incurring one. That's why you still see so ma... View
tim_c - 23 minutes ago
That just replaces one threat with a bunch more... unrestrained dogs, inadequately restrained dogs (on leads that extend seve... View
tim_c - 42 minutes ago
It's not really that illogical - those who have the potential to inflict the most carnage have a greater responsibility to be... View
Community 12

Brianna - 11 minutes ago
For all those who do want to help out, please consider talking to your neighbours that have over grown yards to find out if t... View
tim_c - 57 minutes ago
I think all the ACT Government maintenance people are still working from home... over 4 months ago I reported some severe dam... View
babyal - 3 hours ago
Ken Behren CR is correct the legal issue if something were to happen would be so not worth the trouble. you want to change le... View
Community 2

Maury’s carpentry career provides a peek behind the Hollywood curtain

Love in the age of COVID-19: Doug and Dimity’s special day is one to remember

@the_riotact @The_RiotACT
A new report from @YWCACanberra has revealed 48 per cent of young #women have experienced some form of #sexualharassment, and COVID-19 has exacerbated economic inequality for women in Canberra https://t.co/E63Hq95nxU (19 minutes ago)