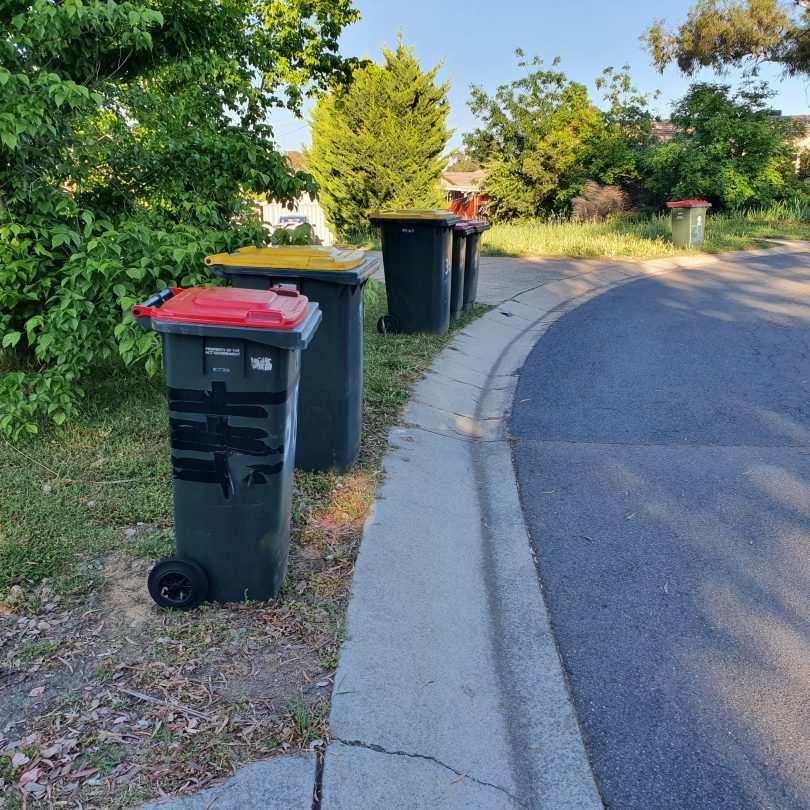 Negotiations over pay and conditions which could avert strike action are continuing between garbage collection company Suez and the drivers’ union, the Transport Workers Union (TWU). Both parties met yesterday with the Fair Work Commission (FWC) to try to find a solution to the six-month impasse.

The union is set to meet with its members tomorrow (25 November) when discussions will continue.

TWU ACT Secretary Klaus Pinkas said the union gave Suez “some things to think about” at their meeting on Monday (23 November).

Suez representatives also presented further options to the TWU in line with the FWC’s 18 November request that both parties reconsider their bargaining positions.

Both parties will meet with the commission again on 2 December.

Four days’ notice must be given before any industrial action, so the earliest day drivers could strike would be early next week. If drivers walk out again, it will be the fourth time in five weeks that some Canberra residents would miss out having their bins collected.

“Garbos across the ACT have reported that the vast amount of feedback from local residents has been supportive. Drivers who work for Suez, picking up the bins in the ACT, are locals too. They work where they live,” Mr Pinkas said.

“In response to claims that garbos are being greedy, the TWU believes that it is a good idea that critical workers are well paid for the job they do. It is generally acknowledged that low wage growth is a problem in both the national and ACT economies.”

However, Suez’s NSW General Manager of Collections and Logistics Paul Haslam says the company has been negotiating in good faith, going back to drivers with five different offers over the past six months.

The union is also negotiating for the restoration of a paid rest break after two hours of overtime and the better efficiency in managing matters taken to the human resources department.

As usual Pinkas has got his head up his backside. Community support for his selfish actions is non existent!

I understand he is actually paid by the ACT Government and not the TWU.

“Mr Pinkas said the drivers had the support of the Canberra community.”

No-one I’ve spoken to supports this. In a time where we’ve all had to make sacrifices, this industrial action is just unreasonable. Can’t they just be replaced?

Theyre being paid $37 and hour to sit in an air-conditioned cabin, lining up a hydrolic arm.. pushing a button then tipping off at the dump when full…

“the TWU believes that it is a good idea that critical workers are well paid for the job they do. It is generally acknowledged that low wage growth is a problem in both the national and ACT economies.”

There might have been a bit more justice in the first point in the days when garbos had to run, or at least trot, along behind the truck, and then hang on the outside in all weathers – things are a bit different now.

The second point is basically just a contemporary re-hash of the old wages arguments which ultimately boiled down to a question of which dog can/should chase its tail most quickly. It’s a mindset which got Australia into a lot of economic trouble, and which took a lot of sacrifice to get out of, in the days before the rest of the world started paying us ridiculous prices for the stuff which is dug out of the ground. We seem doomed to re-live that history.

When is the contract due for review?

No ‘critical worker’ in Australia is pulling in 4% annual pay increases.

Not a great deal of evidence in your response Brian Windsor.
Care to elaborate? Cite a source?

So, is it being collected tomorrow or what?

Shayne, CPI is not fair. It once was, but the methodology changed years ago. CPI is simply a measure of inflation now.

Shayne Borger CPI is not a wage increase it’s just keeping up with inflation. Union members vote to take protected industrial action. The TWU represents the wishes of its members. We have the most restrictive industrial laws in the free world so exercising their only legal right to get a better deal for themselves every three or four years is not thuggish behaviour. SUEZ could just agree to a better deal, maybe they are the thugs

I heard the truck this morning in Gordon, so fingers crossed when I get home, both bins have been emptied!

In capitalism it doesn’t matter what you think a job is worth, what matters is the amount of people who are willing to do it at a certain price. Yes, some careers pay more then you might expect, and others less, but this is to do with how many people want to do that job, rather than the difficulty of the job itself. Why do Nurses and Teachers get paid less than Garbage truck drivers? Because more people want to be Nurses and Teachers.

I think people need to be mindful of there comments. It is only speculation what these guys get paid. Do they get a base salary so if they work more hrs one week they get the same money? Also what are the conditions they are working in. I mean it’s not like they drive around in air conditioned trucks as I have ever noticed the windows open. Also the heat and stench in the hottest part of the yr. so next time you want to comment you are only speculating

Harry Vallianos no its realy not, its pretty well on the money

Do they? Most people haven’t had a pay increase this a couple of years (non APS) and would be delighted to get 3.4% the year and 8% over the next 3 years.

Even the APS who have be getting 2% or less a year (after protracted negotiations) would be delighted with the deal offered by Suez.

Most people are either not in a union or are in a crap one. The TWU have always fought for its members. SUEZ has an on-going contract with the government and would have had employee wages and conditions and contingencies for increases factored into the tender process.

Employers want to pay the least amount possible and employees want to earn as much as possible, such is the nature of bargaining. The only bargaining tool employees have is the withdrawal of its labour.

Phil,
Suez do not have an ongoing contract with the ACT government.

And yes, employees do have the right to negotiate but if they aren’t being reasonable, they also might find themselves unemployed.

Suez has a contract that commenced in 2013 and expires 2023, worth $180million. They have 5 other contracts worth around $12million.

An employee in the ACT cannot be terminated on the grounds that they are taking protected action. You cannot be made redundant for the same reason. If redundancies are legitimate, employees must be paid out all of their entitlements. Any incoming contractor could not deny a driver who worked for the previous contactor, a job, based on that employee taking protected industrial action with the previous contractor.

If SUEZ believes the employees’ demands are unreasonable, they can apply to the Fair Work Commission for dispute resolution. Subject to the terms of an existing enterprise agreement, this may include arbitration. The Commission can take into account, existing contracts, financial statements and other labour and commercial market forces.

Well the union are telling lies as usual, because I’ve seen barely anybody supporting this extortion for unreasonable pay rises.

“The union is also negotiating for the restoration of a paid rest break after two hours of overtime and the better efficiency in managing matters taken to the human resources department.

Mr Haslam says that of the 2,500 employees the company has in Australia, some staff have not had an increase this year, while those on hourly rates have seen increases between 1 and 3 per cent.”

Important part of the article, folks. Read the whole thing.

Anne O’Hara blame Suez for not coming to an agreement with the workers, not the workers for striking.

Support from the community? Not many that I have read. They already get paid more than teachers and nurses and certainly don’t have a lot of peoples support.

Chris Vlahos Mr Pinkas continues to be paid while the drivers lose their pay while on strike.

Clinton Berry you do realise there are other people talking about it and not just the Riot Act. When I look at all the people who have had wage freezes and the fact that nurses get paid less than I think maybe the truck drivers need to have aa look at themselves. I agree with giving them fair break times but the rest is selfish.

Jesse Mahoney the pay dispute is internal to Suez, it has no effect on the contract with the ACT Government, other then a clause or two covering disputes and non payment for service not rendered.
Hence the election had nothing to do with this.

Clinton Berry I support them. Sometimes striking is the only option. Just remember they’re not being paid while they strike. They’re not doing this lightly.

Leanne Hermes I’m in the Canberra community and I support the garbage truck drivers.

Leanne Hermes i was always told you couldn’t make money looking out a window by teachers, umm I beg to differ now 🤣🤣

Collections as usual in Tuggers this morning. Truck being driven by a smiling lady.