The Mountain Bike and Trials World Championships were officially opened today with a ceremony and race in Civic. Canberra showed the international competitors and specatators a sample of the early spring weather to come – sun, followed by rain, followed by sun.

The opening ceremony was fairly typical. The RMC Marching band lead the teams into Garema Place; there was a welcome to country, by Ngunnawal elder Aunty Agnes; speeches from big wigs; Andrew Barr said some nice things about Canberra & Stromlo; and a large mascot kangaroo, emu & cockatoo wandered through the crowd (much to the delight of the overseas visitors – including the German team).

After the formalities were over, a criterium race was staged through Garema Place and Petrie Plaza, including a small set of stairs at the end of Petrie Plaza. The Rat Patrol turned up with a rat low rider and tall bike, which had an “interesting” time negotiating the fairly simple city circuit (I heard that the low rider binned it on the steps during the race). In addition to the rat bikes, a couple of guys in summer suits also brightened up the field. One very keen entrant in the Open Men field raced on a heavy downhill/freeride bike, and wore a full face helmet. 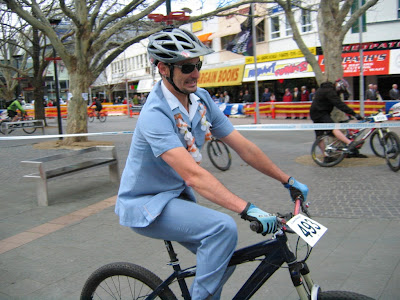 Tomorrow (Tuesday) will see the downhill and cross country courses open for training, so the keen riders will be out for at least one run at Stromlo tomorrow. The Team Relay event is also being run, which is like a tag-team cross country race. Entry is free on Tuesday, Wednesday & Thursday, so you can get a taste for MTB before paying for entry on Friday, Saturday & Sunday.

For more coverage and better photos of today’s opening ceremony and crit race, see Jim Trail’s write up on ABC.

At the start I was thinking it was going to be a nice friendly cruse around Garema Place, but you can see I’ve got my race face on (and my lungs are about to pop out).

Cool pics Kramer, thanks for posting ’em, they capture the flavour of the event well 🙂

Score-wise I agree, the biggest smile I saw that day (apart from the kids) was on the low rat bike, yes, the one who crashed through the barricade and into the crowd — niiiice 😀

I’ve also gotta award another point to the safari suit guys. They are clearly serious clowns, much the same as the Rat Patrol.

This is an amazing event hosted right here in Canberry, but you’d never know if you don’t go… GO!

It was good fun to watch, but the cynic in me sees the city criterium through Garema Place and instantly draws a direct link to TAMS handing out notices to remove display racks in the city.

Nice pic of you there buddy. The full faced helmet guy and the well dressed guys made the local news last night.

I got some shots of the race, and I think most of the riders. If you were involved or had friends fanging about Garema place, check out the photos at http://www.flickr.com/photos/anthonytcanberra. Happy to email at full res pics if you like.

aussie2 - 6 hours ago
Firstly I would be challenging directing all southbound traffic to Woden interchange. We are spread out. Surely those outside... View
chewy14 - 8 hours ago
I actually like what they are proposing here and I think integrating the CIT into the new development space is a sensible mov... View
JC - 12 hours ago
So true. It’s far easier to whinge about anything and everything. Though think the core issue is many here just don’t lik... View
News 9

Capital Retro - 11 hours ago
You can't help bad luck OI L. View
Capital Retro - 14 hours ago
Home batteries generally are duds: https://www.solarquotes.com.au/blog/battery-test-centre-reports/?utm_campaign=sq_news_week... View
Ol L - 16 hours ago
Interest free but still a loan. And who would want a second hand EV given their finite batteries? And yes I do own one. View
News 2

franky22 - 13 hours ago
Well I for one will not miss them. I lived in Sprent St & found the peacocks annoying. They are an invasive species just like... View
ChrisinTurner - 14 hours ago
Residential streets should be 40 km/hr or even the European 30 km/hr, now that 40 km/hr is being applied to parts of Northbou... View
Opinion 8

chewy14 - 18 hours ago
Dolphin, The Greens will never be a realitisic alternative whilst they refuse to deal with reality when determining their pol... View
dolphin - 1 day ago
its not hard jwinston, just look at the libs and you understand why. they are just too socially conservative for most of us.... View
HiddenDragon - 1 day ago
"....The question now is making it work and be accessible to as many Canberrans as possible..." No, Zed, the question is and... View
News 31

Kristine Evans - 1 day ago
Andrew Barr Then you need to let parents into schools before this happens. View
Christopher Marlowe - 1 day ago
Jenna Vdv that's why HECS/HELP exists View
Rod Phillips - 1 day ago
I'd like to see a bit more planning and less guessing all round! We've seen the impact of poor quarantine procedures through... View
Food & Wine 2

bj_ACT - 2 days ago
If you know where to look. There’s amazing food quality to be had on the far South coast of NSW. Problem is it can be hard... View
Breaking 1

Ol L - 2 days ago
When COVID 19 blows over most will rush back overseas. Hope there’s no COVID 20 or they will all want to rush back here aga... View
Community 1

Capital Retro - 2 days ago
Are public toilets included in the plan? View
show more show less
*Results are based on activity within last 7 days

Wajid Kakar, a 35-year-old Afghan national, has been charged with murder over the death of 34-year-old Michael Williams, as well...
*Results are based on activity within last 7 days

@The_RiotACT @The_RiotACT
@midnightoilband is bringing a clutch of Indigenous stars to Canberra as part of its Makarrata Live tour, including young rapper @TasmanKeith https://t.co/xiLThyLtfS (6 hours ago)

@The_RiotACT @The_RiotACT
Running seven marathons in seven states in seven days will be uncomfortable says Kaiti Penrose who is one of six runners in the region taking on the Bravehearts challenge to end childhood violence https://t.co/Briu2xeOMC (7 hours ago)

@The_RiotACT @The_RiotACT
Galilee School will be opening for year 11 and 12 students in 2021 creating opportunities for students challenged by mainstream education https://t.co/gGkYC1X3yN (8 hours ago)