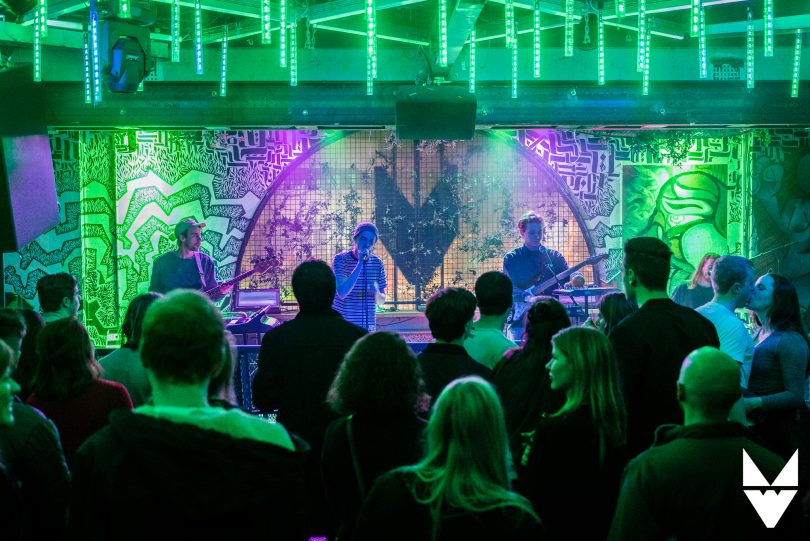 Local bands, local beer and local food – if that sounds good to you, do not miss out on Mr Wolf ‘s Jam Sesh kicking off this Thursday night (16 August).

One of Canberra’s most popular nightclub venues has launched a monthly gig showcasing the best Canberra artists, teaming up with Shorty’s and Pact Brewing Co. to create a good night out for everyone.

Mr Wolf’s debut Jam Sesh will have three of the hottest local talents playing their live tunes while chefs from Shorty’s will be serving mouth-watering burgers and fries from the venue’s kitchen and Pact Beer’s locally brewed tinnies being served behind the bar.

Ryan Sabet, the owner of Kicks Entertainment and Mr Wolf, said he was ecstatic to be championing the local Canberra music community and was excited that local businesses got on board.

“Fostering the local music scene is what Mr Wolf’s Jam Sesh is all about,” Mr Sabet said.

“Mr Wolf is an amazing venue for live music and with so many touring live acts coming through, we felt more support should be going to local artists. Jam Sesh gives bands the opportunity to gain experience playing live and get their music heard. Its also going to be a bit of fun… which is what music should be all about.”

Sharing the same vision for local music culture, the owners of Pact Brewing Co. said they were extremely proud to be supporting Canberra’s live music scene and hopes the opportunity invigorates local artists.

“We get this concept, it feels like just yesterday, we were smashing it out on the drums at Terrace Bar, Toast, Battle of Bands, Woden Youth Centre, Gup Sound, Pod People, Metal for the Brain,” owners Tim Osbourne and Kevin Hingston said.

“We are so proud to be supporting this, let it grow!”

The live music event will provide local bands with a state of the art sound system, a sound engineer and a great venue to strut their stuff and showcase the amazing talent that exists in Canberra’s music scene.

Sit back and let the next generation of local talent take care of you.

If you’re a local band who wants to get involved, please contact hello@mrwolfclub.com.au

Rosemary Braiuka - 1 hour ago
You DO realise you are misinformed don’t you? View
Kir Rin - 5 hours ago
Not to mention the impact each 1 degree will have on ocean levels. View
Denise Bourke - 14 hours ago
I was disappointed U didn't get my Lego joke ... There's more people who share your view .... But í know the frustration. View
News 7

Luke Malacchi - 2 hours ago
Bill Caddey....prime for a bloke with a railbike View
Sport 7

Taryn Cameron-Smith - 4 hours ago
Karolyn Odlum Jennifer Cameron we had better go back soon to check it all out!!! View
Karen Castro - 6 hours ago
I thought you and Anna would love this Emma Toal 🙂 View
Community 12

Peter Bee - 5 hours ago
Zed and friends have put his party into a position of not being electable. A move to the centre needed. View
News 23

Bob Jones - 5 hours ago
Ross Bryant just because you wouldn't use one doesn't mean no one else would. But typical Boomer attitude. View
Property 7

David Reid - 16 hours ago
Do the words frying pan and fire come to mind. View
show more show less
*Results are based on activity within last 7 days

Civic will see new life breathed into it with the opening this Thursday (22 October) of the long-awaited Verity Lane....
ACT Election 62

Prominent Liberal insiders have taken a swing at leader Alistair Coe and the party's conservative wing, saying that the party...
News 23

@The_RiotACT @The_RiotACT
It was an election of a different kind that saw candidates caught between a rock and a hard place to choose the ACT's fossil emblem. Who won? https://t.co/s5eflMMkp5 (1 hour ago)