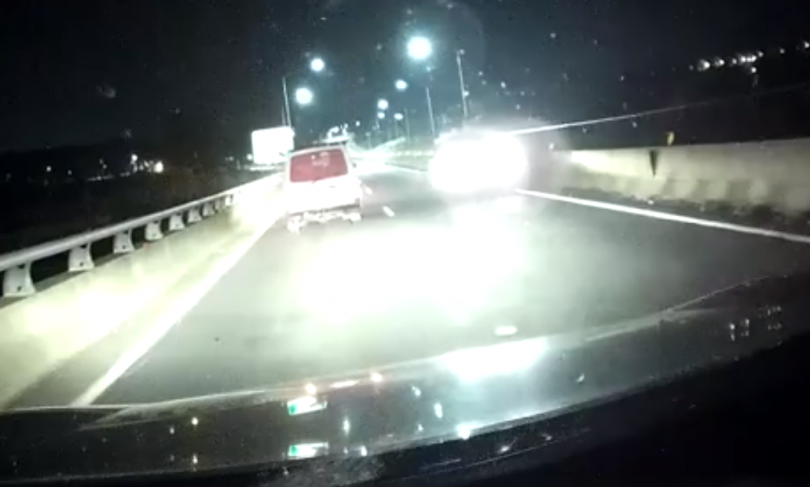 Traffic Superintendent Corey Heldon said this incident is a reminder for all drivers to pay attention at all times. Screengrab of dashcam footage.

Police are investigating an incident on Tuggeranong Parkway after dashcam footage shows a car driving in the opposite direction early on Friday morning (6 September).

Just after midnight, Thanh Vu was heading home after watching the World Cup qualifying match between Vietnam and Thailand at his friend’s house. He was driving south on the Tuggeranong Parkway near the Cotter Road turnoff when he saw a car driving towards him – but on the wrong side of the road.

“My heart skipped a beat,” Mr Vu said, with a smile. “There were two cars in front of me and a bus behind me as well. We all high beamed him or her but the car just keep driving.”

Mr Vu caught the heart-stopping incident on his dashcam, which he posted on Facebook.

You don't see this every day! Just after midnight, Thanh Vu was driving along the Tuggeranong Parkway near the Cotter Road turnoff when he saw a car driving towards him – but on the wrong side of the road. The driver seemingly is unaware of his mistake as cars dodge out of his way. The dashcam footage also showcases Thanh's incredible vocal range and a few expletives.

ACT Policing said they have seen the video on Facebook and are now trying to identify the driver. Traffic Superintendent Corey Heldon said this incident is a reminder for all drivers to pay attention at all times.

“Whenever you’re behind the wheel, you need to be aware of what you’re doing, but also of what’s happening on the road around you,” Superintendent Heldon said. “A head-on collision between two cars at highway speed will often result in serious injury or death.

“If you do inadvertently drive onto the wrong side of a highway, slow down, put your hazard lights on, move over to the side of the road as safely as possible and stop. Call for assistance if you can, but don’t try to turn your car around.”

If you are the driver of the vehicle in question, or if you witnessed the incident or captured additional dash-cam footage of it, please contact Crime Stoppers on 1800 333 000, or via the Crime Stoppers ACT website.

It is becoming a lot more common than it used to be. It is also bloody frightening because it totally unexpected and happens so quickly. I cannot recall encountering someone coming at me on a divided carriageway until the last 18 months or so. I have now experienced it at least 3 times, including in the 100 km/h zone on the Federal Highway at Watson. Another time, just before last Christmas obliviously tootling down Brisbane Ave outside the AFP college and a banged up tradie ute in the middle of the day on the John Gorton Raceway taking a short cut to a job site. I put it down to our lowest common denominator driver licence standards.

The crooks do this to evade ACT Policing in a pursuit situation, knowing the police will not follow them.

From the city that brought you the tram near misses compilation video.

Steph, maybe it’s the same driver from Sunday night who wanted to drive on the wrong side of Coulter Drive 😩😩