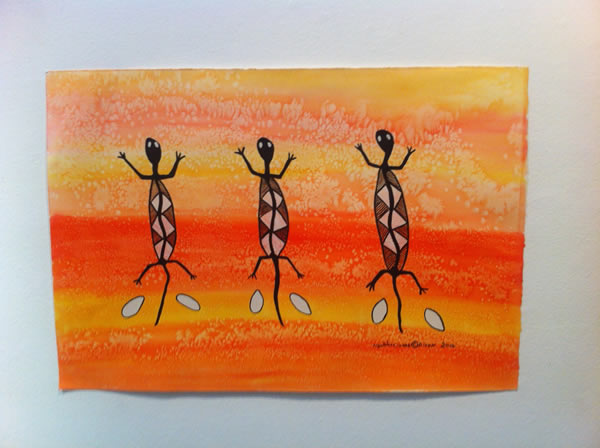 It’s most appropriate to kick off my reviews for RiotACT with this show presented by gallery@bcs as part of its RESPECT series celebrating NAIDOC week. Munyunga, meaning Eagle Hawk in the Ngarigu language, is a mixed media exhibition exploring the theme of “Kootopan” (Oneness) featuring local and South Coast artists Colleen Dixon, David Dixon, Dianne Jerrard, Angela Pisciotta and Renee Smith.

This exhibition seems to reflect unifying developments last year in Canberra’s Aboriginal community such the Murra Bidge event in September, which joined the culture and ceremony of local clans together once more with Ngarringeri people from the mouth of the Murray, who for centuries journeyed to this county along the rivers.

The theme of oneness is well reflected through the skilful mounting of this very diverse exhibition featuring paintings, digital images, ceramics, found objects, beautifully woven baskets and jewellery. Works are for sale and modestly priced. 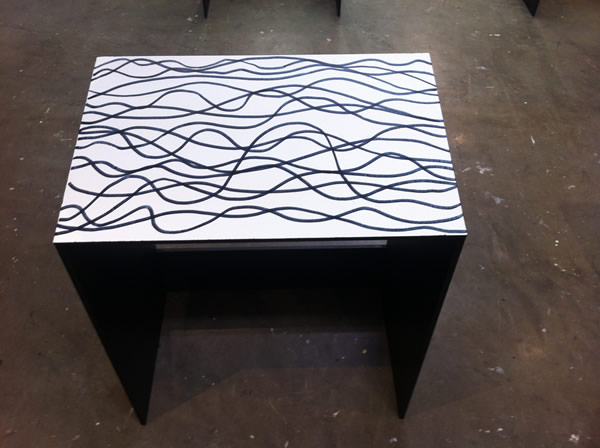 Aaron Garlick’s first solo show, a product of his time as a Studio Resident at the Canberra Contemporary Art Space, explicitly deals with the artist’s reflections on his journey as a student and subsequent quest to establish his own visual language. A series of desks are arranged like a school-room, covered in doodle-like patterns and inscriptions such as we all once made at school in moments of boredom or frustration.

Mr Garlick admitted that some of the paint was still not quite dry, limiting the sense of time passed which was needed to achieve his stated aim of causing one to contemplate one’s existence. It is, however, an intriguing concept that I hope he explores further and is well worth the visit.

Exhibition: Proving My Existence
Where: CCAS Manuka, 19 Furneaux St, Manuka
When: Until 20 July 2014

Gavin Findlay is a cultural entrepreneur, musician and academic based in Canberra since 1992.

Michael A Avis - 5 minutes ago
It doesn’t matter what the people of Canberra say the Corporate Local Government will build it anyway. View
Trevor Senton - 2 hours ago
Scrap it ,the sooner the better , and put a decent bus service around town presently it is under utilised with the improper t... View
Joe McDowell - 3 hours ago
Just scrap it View
News 6

Ursula Wilde - 54 minutes ago
I would of thought the lift section section maybe used as a icon entrance to the bay or dumped of shore for a diving tourist... View
Jessica Thatcher - 1 hour ago
That’s a bit sad 😢 that’s when you knew as a kid you were finally there!! View
Jay Irvin - 2 hours ago
Grace Irvin boycotting Batemans bay now View
Community 5

Nick Swain - 1 hour ago
Griffin had a coherent public transport system based on rail including a track from QBN, through Civic and on to Yass. What a... View
Mike Holland - 1 hour ago
I love trains, and the idea of a high-speed train is very enticing, but I'd probably only use it once or twice for the novelt... View
Pat Gagel - 2 hours ago
I have telecommuted on the trains since graduating in 1992 on and off. I used to get strange looks when I worked away on my V... View
Opinion 51

Capital Retro - 2 hours ago
She sold me a pair of shoes from her Fyshwick shoe store in 1983. I still wear them but I think she outlast me. View
Frank Koch - 4 hours ago
Margaret Freemantle no I don’t but I know of her and she has done well so we shouldn’t begrudge her in any way. Most peop... View
Courts & Crime 1

Leonard - 2 hours ago
No mention in this article of where she stands on the Holden/Ford debate. View
Lifestyle 41

Linda Stapleton - 5 hours ago
mmmm war with a magpie...so who is meant to be the superior species here? No offence meant but surely making friends with the... View
Guy Noble - 5 hours ago
Jim Vizovitis yup play nice and they do,,,, we have had the same parents coming to us to feed there kids for years now View
News 248

Leonard Kelton Smith - 6 hours ago
Very good but I hope you will go back and replace any that die. MY local council in NSW boasts about the number of trees they... View
show more show less
*Results are based on activity within last 7 days

UPDATED 3 pm: Chief Minister Andrew Barr has moved to quell concerns from the ACT's business community regarding a potential...

Residents of Canberra, the South Coast, Geelong and Melbourne have had their mornings shaken up by a magnitude 5.8 earthquake...
News 58

Postcards from Gungahlin: creating a collective portrait of place

@The_RiotACT @The_RiotACT
A major apartment complex is planned for the former Italian Club site in Forrest but first, the land will need to be rezoned https://t.co/Qo0qxhm2yQ (15 minutes ago)

@The_RiotACT @The_RiotACT
Families staying at @RMHCanberra had a sweet surprise when @KokoBlackAust Canberra and My Sweet Lady donated hampers of chocolate and cupcakes https://t.co/Wq9JvHQ4vV (1 hour ago)

@The_RiotACT @The_RiotACT
Popular Canberra Raiders player Sia Soliola has today announced his retirement from the NRL. As he hangs up his boots, he will be remembered as the greatest clubman to ever play for the Green Machine, writes Tim Gavel https://t.co/VnHyhE6yHP (2 hours ago)