New SES chief has young volunteers in her sights 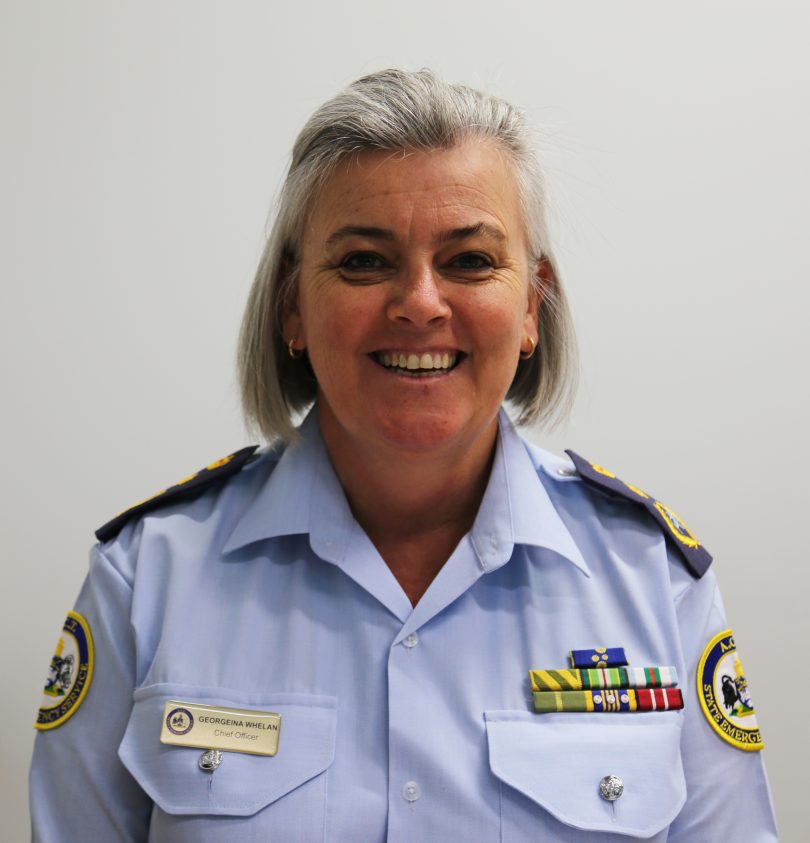 Coming on board midway through a strategic review of the organisation, Georgeina Whelan is also keen to contribute to the reform process.

Ms Whelan has swapped khakis for blues after 32 years in the Army, most recently as the Chief of Staff for the Australian Defence Force Headquarters.

“It was time to settle down and the SES became an attractive option for me, given the role and the engagement with the community that the job offered,” she said.

Minister for Police and Emergency Services Mick Gentleman said Ms Whelan had managed and led both humanitarian aid and disaster responses at a national and international level.

“Ms Whelan also has a wealth of knowledge and experience in successfully recruiting, training and retaining a volunteer-based workforce,” he said.

“She will also bring to the job practical experience as a leader in delivering business reform and major organisational change.”

Ms Whelan is also the first female Chief Officer but gender was not something she focused on.

“I put the noise of gender to one side – as a far as I’m concerned I would like to think they selected me because of I was the best candidate for the job,” she said.

“As a woman though if that sends a strong message to the community and to other women that there are many varied and broad ways in which you can be employed then that’s a good news story.”

She is keen to drive the volunteer experience and make it an attractive one, particularly for younger people.

“I want to make sure that it’s not just the ACT that benefits from the SES but that those involved in the SES benefit from the experience as well,” she said.

That includes recruiting more women, which make up about 28 percent of the 300-strong membership.

“We’re just like any other employer, you’ve got to tap into the best the community has to offer, and a strong gender balance allows you to that,” she said.

Ms Whelan said the SES had a regular intake of about 50 a year with retention levels stabilising over the past couple of years.

“So it’s about growth now and long-term retention, that will be the focus in the next 12 to 18 months.”

“It’s what we’re learning as this community is growing. As the urban sprawl continues and the development continues, we’ve got to continue to learn and be responsive,” she said.

As a former military officer, Ms Whelan is heartened by the Government’s commitment to veterans’ issues such as employment and will be involved in think tanks and activities to support those programs.

Ms Whelan was posted to Canberra in 2012, her husband and three children following a year later.

“We decided this wasn’t just a posting – this was home,” she said.

Joshua Grech - 8 hours ago
David Rees Oh, interesting. There are others. Thales etc View
David Rees - 8 hours ago
I think you will find it did, has got out of trains now. View
astro2 - 8 hours ago
Doesn't need to be high speed, just higher speed would do. The most recent proposal featured very little changes beyond a bit... View
Community 8

chewy14 - 9 hours ago
Perhaps you can link to actual scientific research or investigations showing this particular proposal will cause health issue... View
Capital Retro - 12 hours ago
The residents of Conder and suburbs to the south should worry about this proposal as the standing inversion layer that plague... View
News 9

The heat is on but the ACT is fully prepared, say Territory chiefs