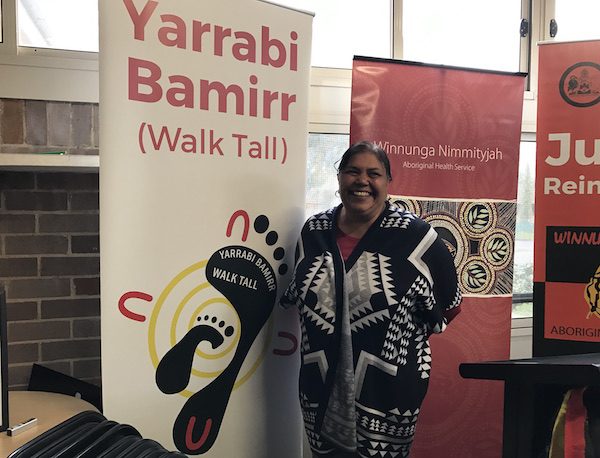 Typically a fleeting formality among event proceedings, the Welcome to Country at today’s launch of Yarrabi Bamirr, a program designed to help reduce over-representation of Aboriginal and Torres Strait Islanders in the ACT justice system, was a highlight.

Yarrabi Bamirr translates as “stand tall” in the Ngunnawal language, so it was appropriate that young Ngunnawal elder Tina Brown presented a Welcome to Country of which her people could be proud, and one that, when shared with members of the Canberra community of all ages, will help them to better understand the history and culture of the first peoples of this region.

In her warm and inclusive speech, Ms Brown shared some Ngunnawal history and creation stories, as well as talking of being proud and honoured to be a participant in the launch of the Justice Reinvestment trial, which is being jointly managed by the Winnunga Nimmityjah Aboriginal Health Service and the ACT Government.

“We’d like to see more projects like this come to our community through Winnunga Nimmityjah,” Ms Brown said.

“It’s absolutely beautiful, and something that has been long-needed in our community.”

You can see Ms Brown’s speech in full here (and find out more about the young elder below):

ACT Minister for Corrections Shane Rattenbury said today that the Yarrabi Bamirr trial would focus on families in which children were affected by the incarceration of a family member, and would respond to the whole family.

The program would run for a year and be managed by Winnunga Nimmityjah in conjunction with the ACT Government’s Justice and Community Safety Directorate. It would be partially supported by reinvested monies from the Confiscation of Criminal Assets Trust Fund.

“Basically it’s getting money off people who do the wrong thing and using it for Government purposes,” Mr Rattenbury said.

Part of the $1.7 million the ACT Government set aside in this year’s budget for justice reinvestment work would also contribute to the program.

“All of this hopefully will get us to a place where families can walk tall, and that is the very premise: to strengthen people and empower them to improve their own lives with real support from Winnunga and the ACT Government,” the Minister added.

Winnunga Nimmityjah’s social health team will work with ten families during the trial to co-design unique family plans to address their goals related to matters such as housing, health, justice, education and employment. Cross-government support will then be provided to families to address identified needs.

Winnunga Nimmityjah CEO Julie Tongs said work had already begun to collaborate with families who will benefit from the program.

She said housing was a critical issue that needed to be addressed in many cases.

“You don’t people who have just come out of AMC, for instance, into Stuart Flats or into Oaks Estate, because that’s not fair. All you’re doing is setting people up to fail.

“We need to have services in there working with those families to make sure that they feel supported, that they’re not being targeted because of racism, and we start to move people out. I think this is a real opportunity now to see what works.”

The program has been co-designed with a range of stakeholders, including Aboriginal and Torres Strait Islander service providers, community groups, academics and those with lived experience of the justice system. Agencies providing critical support to the trial include the Aboriginal Legal Service, the Domestic Violence Crisis Service and ACT Policing.

The Justice and Community Safety Directorate has also employed an Aboriginal trial coordinator to oversee the operational and evaluation requirements of the trial.

Where appropriate, clients will also be provided with legal advice, support in dealing with statutory agencies (including Care and Protection), support prior to, during, and following the serving of a sentence, and referrals to relevant diversionary programs.

The Australian National University has been commissioned to develop an evaluation framework to measure the trial’s success in improving life outcomes and preventing future contact with the justice system.

But back to Ms Brown’s Welcome to Country, in which she explained to gathered dignitaries that the Ngunnawal people had been custodians in Canberra region for over 25,000 years.

“Evidence of this has been found at Birrigai, at Tidbinbilla Nature Reserve, where scientists excavated artefacts from this site and radio carbon dating was implemented to give the timeline of the history of the Ngunnawal,” Ms Brown said.

“The mountains are very old, and an ongoing life force that strengthens the ancestral links of our people.”

The young elder said her people had a living, spiritual connection with the mountains.

“We retain family stories and memories of the mountains, which makes them spiritually and culturally significant to us,” she said.

“Our traditional knowledge and cultural practices still exist with us today. Our people travel from many directions over long distances to gather peaceably on the mountains for trade, ceremony, marriages and social events to settle differences.”

Ms Brown then shared a story that outlined the creation of Ngunnawal country, including the origins and significance of the Murrumbidgee River, as well as explaining how the dingo lost the ability to speak (there’s magic powder involved, kids).

At 46, Ms Brown is one of the youngest indigenous elders in the country. Her parents, Carl and Louise, endorsed her as an elder in 2016. She immediately gained national media attention by stepping up to present a stirring Welcome to Country at the 45th opening of the Federal Parliament.

In addition to her role as a community leader and builder of cultural awareness, Ms Brown is an employment inclusion officer in the ACT Government and an advisor to the ACT Chief Minister. She is involved in the design and implementation of the Aboriginal and Torres Strait Islander Pathways to Government program as well as inclusion traineeships for indigenous applicants and those with disabilities.

With heavy traffic expected to start building around the South Coast holiday hotspots this afternoon, motorists are being warned to...
Opinion 97

Closing the gap is a major problem in Canberra too