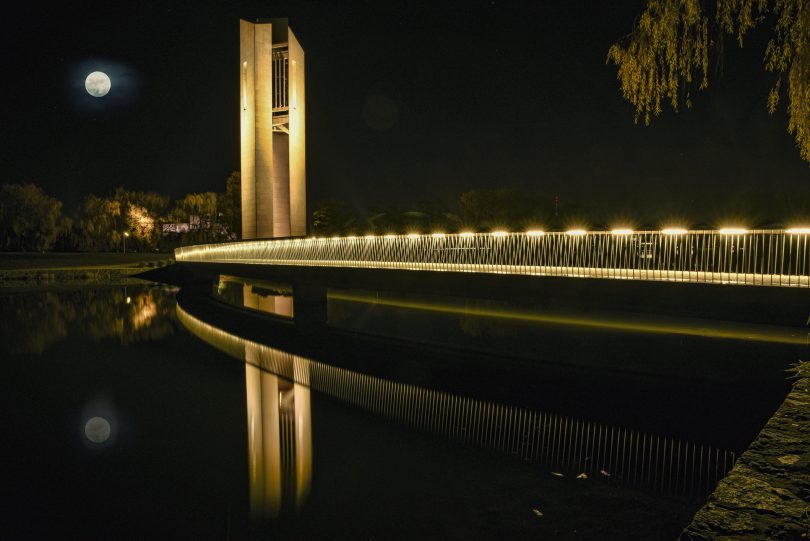 A lunar weekend to be had in the nation’s capital, with an array of events marking the 50th anniversary of the moon landing. File photo.

In case you’ve been hiding under a moon rock, it’s the 50th anniversary of the first moon landing this Sunday and there are plenty of ways to mark the occasion.

The National Museum is displaying equipment from the Honey Suckle Creek Tracking Station in its atrium, the National Film and Sound Archive is screening a program of recordings and films including the three-hour Apollo 11 broadcast in its entirety and the movies The Dish and First Man, and Questacon has a gallery dedicated to The Moon.

Back down on Earth, Bangarra Dance Theatre is in town with its production 30 Years of sixty-five thousand celebrating 30 years of this incredible dance company, Warm Trees continues at the National Arboretum, and Wintervention—Canberra’s Winter Festival in Civic Square—finishes this Sunday. On Saturday play outside in Haig Park, make kimchi at the Canberra Environment Centre, learn about traditional and contemporary Indigenous design at Parliament House, and enjoy a whisky at Pialligo Estate. On Sunday celebrate Chinese culture at the National Museum.

Where: Haig Park
When: 11 am–3 pm
As part of the City Renewal Authority’s push to bring new life to Haig Park, this weekend it is hosting a Kids Outdoor Play Day. There will be a range of activities on offer in the park for kids to try out including tree climbing, slacklining, an obstacle course, nature play, circus skills and aerial sports. There will also be arts and crafts, live music and performances and food stall. Enjoy a fun day out in our city’s backyard.

Where: Parliament House
When: 10:30 am–12 pm
Join Kalkadoon woman Veronica ‘Ronnie’ Jordan to make a doll or animal using traditional Indigenous techniques at this workshop for kids aged 5 to 12 accompanied by their parents. This workshop is presented in association with the free exhibition Indigenous Design Now showing at Parliament House until 11 August which showcases contemporary Indigenous design in the fields of graphic and interior design, jewellery, fashion, sculpture, textiles, architecture and furniture. Tickets to the workshop are $22, book here.

Where: Canberra Environment Centre
When: 2–3:30 pm
Learn how to make kimchi with Nil Barcode Food’s Evangeline Lam. Kimchi is a staple Korean dish made with cabbage, spring onion, chilli, radish and a variety of seasonings. Also learn, why fermented foods are beneficial for gut health and ways to use kimchi. Pack a glass jar to take a sample of kimchi home at the end. Tickets are $35, book here.

Where: Pialligo Estate
When: From 6 pm
Pialligo Estate is celebrating whisky this weekend with a mini tasting festival on Saturday night. Hosted by Phillip Jones, enjoy a glass of whisky on arrival, taste four whiskies from around the world, snack on Pialligo Estate’s charcuterie boards and join in interactive games with a prize for the winner at the end of the night! Hang around afterwards for live music, good food and more whisky. Tickets are $60, book here.

Where: National Museum of Australia
When: 10 am—1 pm
It is the final weeks of the Museum’s Historical Expression of Chinese Art exhibition which features artworks from the National Museum of China and to celebrate the exhibition the Museum is putting on a free family festival this Sunday. There will be calligraphy, dragon and lion dancing, food, tea ceremonies, music and arts and crafts with artisans from the Chinese community in Australia. The Historical Expression of Chinese Art exhibition will be in the temporary gallery until 28 July and is free to attend.

Where: GIO Stadium, West entrance
When: 1:30–3:30 pm
Meet a member of the National Portrait Gallery Access and Learning Team to look at and sketch Cathy Weiszmann’s bronze statue of Mal Meninga at the GIO Stadium. Then head somewhere warm to share your thoughts over a cuppa.

Saturday the 20th there’s also FIRE and ICE on @The Basenent
The Zombie Apocalypse……. get your tickets at

Not forgetting WinterCon, which is on at EPIC.

Claire Lenehan - 8 minutes ago
Helene Jermolajew Thanks! Stay safe View
TheSilver - 2 hours ago
Of course no one want to get sick, but it is part of the human experience and unavoidable. The real question is, and always h... View
Julie Kidd - 2 hours ago
Thanks for reminding us. This isn’t over. View
Opinion 6

Shirley Willis - 27 minutes ago
Sandra Zahavah Whibberley If you check my comment I DID NOT say that you vented a poisonous attack.I said it appeared the “... View
phydeaux - 33 minutes ago
Robin Bontjer, because he did not donate $4M. It was $25k, after a push from Sharapova who donated that then tagged him to ma... View
Jonny Scott - 44 minutes ago
Robin Bontjer ones good can all be canceled out when your true colors come out! View
Business 6