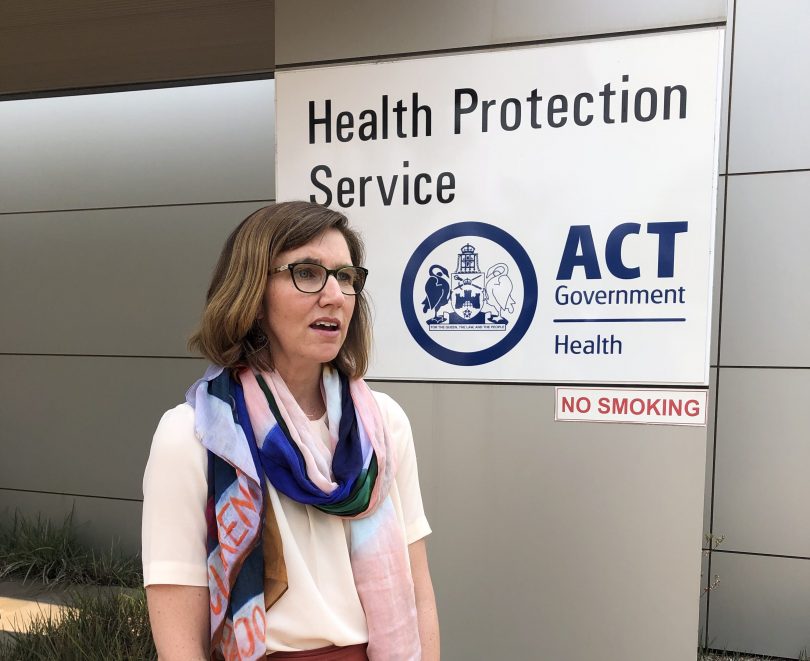 Dr Vanessa Johnston warned Canberrans not to be complacent, especially in the lead-up to the Easter long weekend. Photo: Dominic Giannini.

Canberrans have been warned not to become complacent and that they are in for a long campaign against COVID-19, as health officials said there had been no new cases recorded in the ACT in the past 24 hours.

The ACT’s total remains at 96, with two deaths, but ACT health continues to urge caution and is asking the Canberra population to remain vigilant as the Easter holiday break approaches.

There are currently seven COVID-19 patients in Canberra hospitals, with three in intensive care. ACT Health says that 40 patients have recovered completely and have been released from self-isolation. The remainder are isolating at home with ACT Health support.

There have been 5329 negative COVID-19 tests in the ACT to date. There is still no evidence of community transmission but two cases are still being investigated.

Health Minister Rachel Stephen-Smith rejected suggestions that the lack of new cases in the ACT meant the pandemic would be over quickly and restrictions could be relaxed.

“Quite the opposite. What we know about flattening the curve is that it makes the curve longer, so the more successful we are at flattening it the longer we are dealing with this situation,” she said.

She said that would enable the health system to cope with new cases and not be overwhelmed.

“We are really trying to avoid some of the terrible scenes that we have seen overseas with hospitals being overwhelmed and clinicians having to make very difficult decisions about who receives care and who doesn’t,” she said.

With the number of new cases dwindling, the challenge would be to maintain the momentum and keep the community on side.

She said governments would have to continue being up front with the community. Part of that would be National Cabinet releasing modelling this week to help the community understand the importance of the physical distancing strategies.

The Minister reiterated the Chief Minister’s call for people to stay home this Easter and not visit the coast, mountains or small towns in the region.

She also had a message for young people. ”Everyone needs to take responsibility for this and that includes young people who may think they are bullet proof but they are not immune,” she said.

Acting ACT Chief Health Officer Dr Vanessa Johnston said the recent reduction in confirmed cases was welcomed but also warned that as soon as restrictions were relaxed there would be an uptick in cases.

“Canberrans have been doing a fantastic job complying with the rules on physical distancing and staying at home, and that is definitely helping us to flatten the curve,” Dr Johnston said.

“However, this disease is still spreading throughout Australia. There will be more cases of COVID-19 in the ACT and we are now even more actively looking for undetected cases.”

Testing was being expanded to include frontline health and aged care workers and others in high-risk environments, as well random testing of people who have symptoms but otherwise don’t meet the testing criteria.

But Dr Johnston and the Minister said the ACT could not afford to ramp up testing to a mass level, which would use up valuable testing resources and not be an efficient use of those resources.

Testing needed to be targeted, so it could detect any unidentified community transmission, they said.

“While there is currently no confirmed evidence of community transmission in Canberra, expanding our surveillance will assist to detect this early,” Dr Johnston said.

“I encourage Canberrans not to be complacent. Stay home this Easter, do not travel down the coast or interstate or organise large family gatherings. Continue with physical distancing measures as well as maintaining excellent hand and respiratory hygiene practices.

“The steps we take now will lessen the impact on our health system when community transmission does start to occur here in Canberra.”

The Federal Health Department is now producing a COVID-19 infographic on its website that is updated daily to give people a quick overview of the situation across the nation.

For ACT information go to the ACT Health website.

By this logic these measures should be made permanent. No, the medical emergency has passed so we must restart our economy and restore our civil liberties. If not the nanny state will become the police state.

The emergency has not passed. Next point I don’t think you are being logical.

Capital Retro - 6 hours ago
Origin are giving 0.17c per kWh on residential solar feed in some NSW regions. If I had 8 solar systems I think I would be cl... View
Capital Retro - 11 hours ago
Organics and renewables are all part of the manufactured "green-think" idealism. Some of these people even put nitrogen in th... View
John Giacon - 11 hours ago
Hi. While ACT prices are rising, they are still cheaper than NSW - though I found it hard to find clear figures on actual pri... View
News 16

ICU nurse at TCH one of three new COVID-19 cases

@the_riotact @The_RiotACT
Recent rainfall has #LakeGeorge looking pretty full, but is it returning to its former glory? An expert from the ANU believes another wet year in 2022 and we could see water lapping the #FederalHighway like in the 1990s https://t.co/R1TWago0qJ (28 minutes ago)