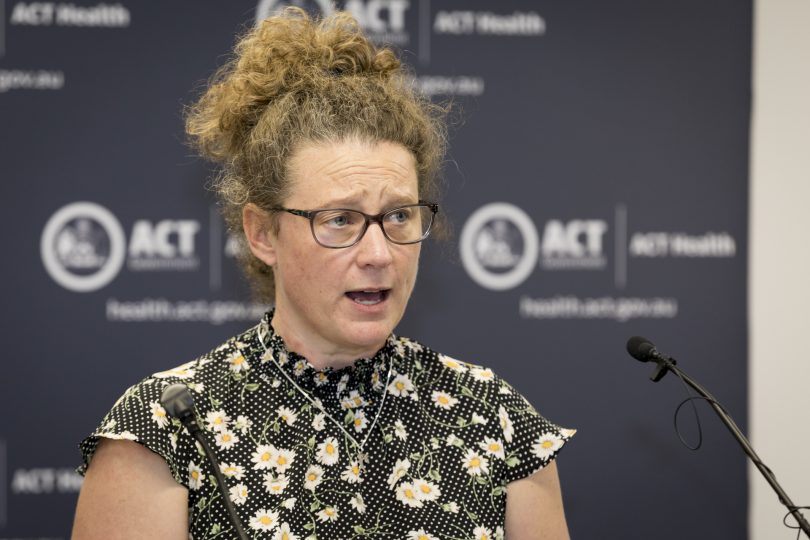 The ACT has recorded one new case of COVID-19 in the past 24 hours, bringing the total number of cases to 104 – but the man was found to have already recovered from the virus.

The positive result, from a 40-year-old man, was discovered when he underwent a test to see if he could have had the virus after returning from overseas more than a month ago.

The case was confirmed when ACT Health was conducting contact tracing on another suspected COVID-19 patient.

ACT Chief Health Officer Dr Kerryn Coleman said the 40-year-old man acquired the virus from overseas but there was no risk of exposure to the community as he followed self-isolation guidelines on arrival, even though they were not mandatory at the time of his arrival.

“He returned to Canberra and did all of the correct things that we had asked of them [at the time],” Dr Coleman said.

“The reason that this case has come about is because the man was identified as part of our contact tracing to identify the source of exposure for one of our cases under investigation.”

One patient remains in hospital because of the virus but none are in intensive care. Initially, the person had been included in last week’s hospital tally update, but was taken off over the weekend because ACT Health determined that they had cleared the virus, Dr Coleman told reporters.

However, as the patient is still in hospital as a result of the consequences of the infection, he has been re-added to the hospitalised case tally.

A total of 91 people have recovered from COVID-19 and have been released from self-isolation while the remainder are isolating at home with ACT Health support.

The number of negative tests in the ACT is now 6959.

Chief Minister Andrew Barr says lockdown measures will not be eased despite the increasingly optimistic outlook because of the cyclical nature that pandemics take, comparing the crisis to the Spanish Flu.

“So far we have hit the right note, but there is so far to go in this pandemic,” Mr Barr said. “We need to continue to be cautious and respond as the circumstances reveal themselves to us because we do not know where this will go next.

“The history of the Spanish Flu a century ago was that the second wave was significantly larger than the first and far more deadly. This virus will continue to circulate around Australia even if it stops in the ACT and all it takes is one person to begin another chain of infection.

“While it is possible for an island nation to pursue an elimination path, it is a short-term elimination path because this virus will continue to circulate around the world for many years – any early move out of restrictions runs the risk of a second or third wave.”

The concept that Australia would have to keep its borders locked down completely if the virus was eliminated in the country or the ease at which an outbreak can start is not clearly established in public sentiment, Mr Barr said.

“I am worried about public frustration at the lockdowns but I did say this from the start, that decisions we took now were going to have long-term implications that were going to be beyond just a period of weeks – they were going to be months and potentially years,” he said.

“There is a lot of work going into looking at how we can shape a series of measures that are less restrictive than where we are at now but that still provides some level of protection.

“We cannot completely eliminate the risk but you can make some sensible risk reduction and risk minimisation decisions and measures, and some are as straight forward as closing Australia’s borders and others go to limiting the size of public gatherings.”

Dr Coleman also reminded Canberras to stay vigilant, saying that the situation is improving but the pandemic is not over.

“With a great contribution from the whole community we have managed to put the ACT in a very strong position,” she said.

“We need to keep this effort going to make sure we don’t get a fresh spike in cases that could easily turn into the types of numbers we see in other parts of the world.”

Dr Coleman said with another long weekend coming, people are being urged to continue being responsible by staying at home.

“Anzac Day is an important day for Australians but large gatherings or trips away are simply not possible this year,” she said.

“I strongly encourage people to find ways of commemorating Anzac Day that are consistent with the rules around physical distancing.”

“I am worried about public frustration at the lockdowns….”

Let’s hope this means we continue to avoid the sort of over-the-top enforcement which has been seen in other jurisdictions.

The restrictions necessarily have a large dose of the arbitrary to them, along with many easily highlighted inconsistencies – which is surely a good reason for showing a degree of forbearance in enforcement, particularly if restrictions of some sort are going to be around much longer than the latest encouraging infection statistics might suggest.

In other words, $$$ spent on the (likely redundant) Aspen ICU tent city at TCH has to be somehow justified!

A gradual re-opening of schools and moving to a mix of on-line and face to face teaching will be a good start.

I’d rather my kids weren’t used as guinea pigs, thanks.

Ray Ez - 3 minutes ago
It’s like they never saw it coming! Again! And again….and again… View
Linda Stapleton - 4 hours ago
Oh the poor souls mowed near our home only a couple of weeks ago and oh dear the grass is now two feet high already. I feel s... View
Sport 5

@The_RiotACT @The_RiotACT
This couple has the passion and all the skills required to undertake a sympathetic #renovation of one of Canberra's iconic mid-century modern #homes. We're looking forward to seeing the finished product https://t.co/bkM1mb6xvA (4 hours ago)