One of Canberra’s greatest athletes retires from competitive sport 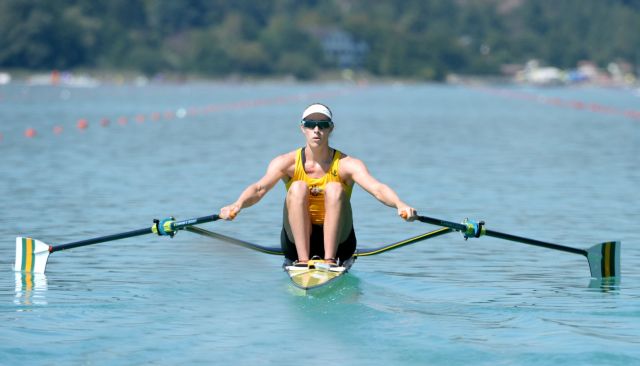 Kim Brennan competes in the heats of the 2015 Rowing World Championships in Aiguebelette, France. Photo: Supplied by Rowing Australia.

When Kim Brennan won gold in the women’s single sculls at the Rio Olympics, there was an enormous sense of relief. Such was the expectation on Kim, that it reminded me of Cathy Freeman in the lead-up to the Sydney Olympics 16 years earlier.

Things didn’t go to plan in the early stages of the regatta in Rio as her boat filled with water and she finished well back in the heats. But as is the nature of rowing, there is always a second chance.

History now shows that Kim led from start to finish to win Australia’s first ever-Olympic gold medal in the women’s single sculls. The hours of early morning training sessions on Lake Burley Griffin had been paid off in spades.

Many pondered at the time whether this was to be her last competitive race. Up until Saturday night, Kim was leaving the door open saying she was not sure what the future held. But the birth of her first child, Jude, earlier this year proved to be the tipping point.

At 33 years of age, Kim says she knew it was time to make it official.

“While I have known within myself for some time that I am happy to leave my competitive career behind me, the arrival of Jude has put the decision beyond doubt. I am loving every minute with him, and on a personal level, I can’t imagine now being able to give the time and energy necessary to be successful in rowing at the top level.”

Outside the rowing community, it may be hard to get a handle on the significance of her achievements: an Olympic gold medal in Rio; silver and bronze in London; two world titles; 19 world cups; three Olympics; and eight world championships.

Kim made her first Australian team in rowing just eight months after switching from track and field. Under the guidance of renowned coach, Lyall McCarthy, for almost the entirety of her rowing career in Canberra, Kim went onto conquer the world.

Now that she has finished with competitive rowing, apart from motherhood, what is on the horizon for Kim? She says she is learning a great deal through her role at Ernst and Young and she has been given some great opportunities.

I have long predicted that Kim and husband, 2008 Olympic rowing gold medalist and Doctor, Scott Brennan, will in some fashion be future Australian leaders. Spend some time in their company and you will come away impressed. This is just the beginning for Kim.

Rachel Mackey - 16 minutes ago
Angela Thiele we’ll be able to use it soon, whenever we can have this baby shower the gelato cart will be there! View
News 42

Feedback - 50 minutes ago
Lighting up of monuments in blue to celebrate vaccination rates - How utterly ridiculous. This is a city which now has 80% va... View
John Moulis - 1 hour ago
That's rich. The backflip was caused by the plainly inequitable position of New South Wales reopening retail while shops in t... View
dingus_maximus - 4 hours ago
Not to mention, halfway through our lockdown, moving the vaccination rates to include 12 and over where every other jurisdict... View
News 226

Naomi Hume - 56 minutes ago
when i was 7 or 8 i had a accident on the small flying fox and had to be taken to hospital to have 15 stiches put in my chin... View
Kit Oates - 1 hour ago
Sounds like it could use reviewing to ensure its safe, though given the extent of the damage I have a strong suspicion that i... View
Rebecca Russell - 2 hours ago
Francie Bennett yeah I did too . View
Opinion 81

@the_riotact @The_RiotACT
It's been quite a journey for the Nimmity Bell, but the tiny #Monaro community will finally #celebrate on Saturday after a long and improbable saga https://t.co/8xTA8gFR4V (3 hours ago)