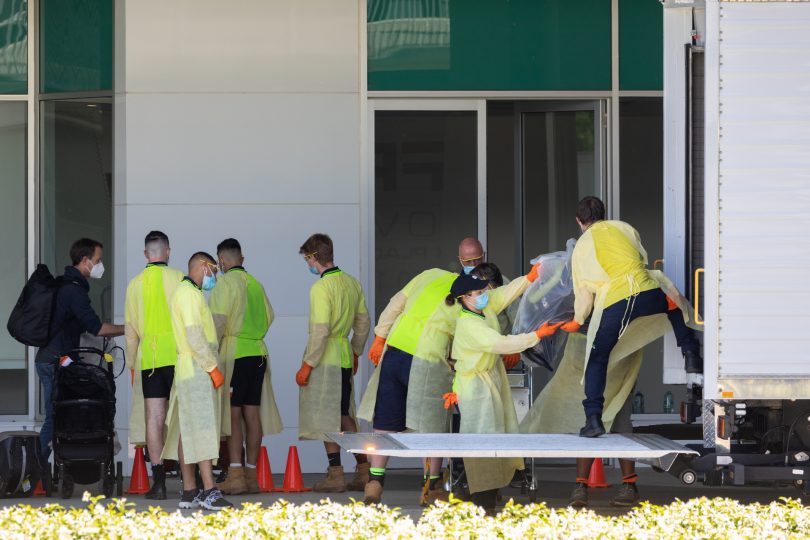 All Government-facilitated flights are met at Canberra Airport by ACT Health staff before being health screened and transported to hotel quarantine. Photo: Michelle Kroll.

One of the 177 Australians on the ACT’s fifth repatriation flight has been transported to hospital upon arrival for an issue unrelated to COVID-19, ACT Health has confirmed.

The passenger remains in hospital and has been isolated while infection control measures, including full protective equipment for nurses and health staff, are in place.

All other passengers underwent health screening at the airport and will be given a COVID-19 test today (2 March).

The hub flight left Singapore carrying Australians who had been stranded across Asia and Europe, including Vietnam, Thailand, Indonesia and Portugal.

“The arrival of the passengers into Canberra, including a mix of families, individuals, adults and children, went smoothly and they are now safely in hotel quarantine,” an ACT Health spokesperson said.

Passengers were tested before boarding the flight, today on their first day of hotel quarantine, and will be tested again between day 10 to 12 of the 14-day quarantine period before they can be released.

Anyone who refuses a test will be forced to remain in quarantine for an additional 10 days at their own expense.

Health Minister Rachel Stephen-Smith said the ACT Government has budgeted to receive an additional four flights before the end of the financial year.

“Our budget measure has supported six flights from the start of this year until June,” she said.

“We will continue to work with the Commonwealth about what they are doing for the continuation of repatriation flights. I assume that the [government-facilitated flights] will continue, just not at the same level.”

The ACT Government has said that it will only receive one repatriation flight per quarantine cycle as Canberra only has one hotel – the Pacific Suites on Northbourne Avenue – operating as a quarantine facility.

aussie2 - 2 hours ago
Here is another for the "shopping list". It is government responsibility to ensure its citizens have access to pools and othe... View
2902 - 5 hours ago
Imagine the money one could make building apartments on this site, right out the front of the proposed light rail track View
ChrisinTurner - 6 hours ago
There is not enough attention to maintaining services in areas with dense populations. The government seems to be working on... View
Opinion 75

Naimad Doowneerg - 2 hours ago
Bernard Miller not sure what you mean by "shear (sic) volume of adverse events and deaths". According to the TGA There have b... View
Garvin Francis - 3 hours ago
Nada Krstin So here’s totally what wrong with this whole anti vaxx, anti mask, anti lockdown argument. Its not about believ... View
Deborah Gale - 9 hours ago
Nada Krstin The vaccine gives protection and greatly reduce the likelihood of serious disease which is great. But children wh... View
Opinion 2

estelle3724 - 4 hours ago
I would like to ask Ms Castley what more she wants the government to do for business. She never mentions that business receiv... View
News 6

phydeaux - 4 hours ago
Rather my point, JS9. “…without qualification”. With significantly different individual circumstances, to give an answe... View
Kathy Blunden - 5 hours ago
I was also totally shocked with my electricity bill. It is the highest bill I have ever received and I have solar panels!!!... View
JS9 - 6 hours ago
It is a weighted average across a range of plans - so it means some will go up more, some go up less. Over the basket of plan... View
News 12

lexyliz - 10 hours ago
Does anyone know what happened with this case? A friend mentioned it yesterday as we are planning to send our son to this cen... View
News 8

Capital Retro - 11 hours ago
The next high impact bushfire that will rip through Canberra will be in about 20 years so there should be plenty of time to r... View
show more show less
*Results are based on activity within last 7 days

WARNING: This story may distress some readers. 'Pindar' the peacock is the latest to be struck by a car on...
Sport 139

Paid parking in Canberra has been a magnet for controversy and will continue to be so into the future with...

@the_riotact @The_RiotACT
The @ainslie_fc has big #redevelopment plans and the first step is a change to the Territory Plan https://t.co/T9Kcushdi3 (40 minutes ago)