Panel forum and book launch: Die in battle, Do not despair: the Indians on Gallipoli, 1915 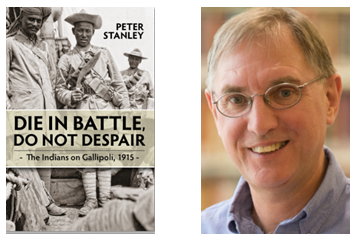 Join us at UNSW Canberra at ADFA on the 5th of August for a panel forum and launch of Professor Peter Stanley’s book: Die in battle, Do not Despair: the Indians on Gallipoli, 1915.

Reception and book launch?
Die in Battle, Do Not Despair: the Indians on Gallipoli, 1915 (Helion & Co., Solihull, UK) by Professor Peter Stanley

bj_ACT - 2 hours ago
Where do you get 15,000 per day average from? Start of Light Rail to end Feb 2020, before Covid hits is 11,000 per day.... View
chewy14 - 3 hours ago
JS9, Yes the subsidy on the bus network is massive but the argument that comprehensive public transport is an essential publi... View
Heavs - 3 hours ago
A social housing pilot - like Common Ground? View
Community 9

Capital Retro - 2 hours ago
".... An emblem showcasing medieval queens, crowns, and castles, doesn’t represent 21st century Canberra..." We have all th... View
Stephen Saunders - 7 hours ago
Symbols do matter. The British monarch is the white hereditary chief of the Church of England. An emblem showcasing medieval... View
HiddenDragon - 17 hours ago
"Could the Brindabella Ranges be incorporated into the ACT’s coat of arms,..." An image which combined the mountains and th... View
News 12

Capital Retro - 2 hours ago
No one seems to know but I heard CM Barr on ABC radio say the $50,000 a year includes the fees to the universities and all th... View
JS9 - 4 hours ago
Oh please. They have been forced to build their business model around the income from international students - governments of... View
keek - 1 day ago
Not sure it is Governments that have painted them into a corner, more that they have been enabled to paint themselves into a... View
News 1

jwinston - 4 hours ago
How many committees and inquiries does there have to be before anything constructive is done at the AMC? From what has been p... View
News 71

JC - 17 hours ago
Yup. And if going to knock it down (Civix) and rebuild it may as well do it elsewhere and keep Civic with its Duby done open... View
JS9 - 1 day ago
I think the Civic pool is probably a lost cause in terms of fixing it, without knocking it all down and starting again. View
News 58

Capital Retro - 18 hours ago
I've already pointed out the folly of people building in the forests which are known bushfire areas. It seems some academics... View
Community 1

ChrisinTurner - 21 hours ago
Remember when the ACT government acted to make it uneconomic to have a supermarket in Coombs? So much for walkable localities... View
News 2

The Canberra bubble proved itself to be an opaque and murky edifice as it settled over Parliament House last week....
News 12

A flood of professionals taking up work in the national capital is putting the squeeze on the Canberra rental market,...
News 18

The ACT Government has welcomed a funding injection of $132.5 million from the Commonwealth for the next stage of the...
News 12

Chief Minister Andrew Barr has floated the idea of the ACT receiving one flight of international students for every repatriation...
Opinion 12

The news this week was grim for anyone caught up in Canberra's brutal rental market, as rents continue to climb...
Community 9

Could the Brindabella Ranges be incorporated into the ACT's coat of arms, or perhaps a gang-gang cockatoo, the royal bluebell flower or...
News 71

UPDATED 12:45 pm, 16 February: All the tiles, levelling screeds and coatings of the Gungahlin Pool will have to be...
News 11

RiotACT and About Regional readers have woken this morning to depopulated Facebook feeds as the social media giant makes good...
News 25

@The_RiotACT @The_RiotACT
Zach Bates will be the youngest competitor in his first race at Bathurst this weekend, but the Canberra Grammar student has a great track record behind him, despite being only 16 years old. https://t.co/0h1WVWaRVm (40 minutes ago)

@The_RiotACT @The_RiotACT
Public service misconduct investigations are taking up to 200 days to reach a conclusion, prompting an angry response from the Commissioner https://t.co/peNbUO9sW8 (2 hours ago)

@The_RiotACT @The_RiotACT
A new report tracking the spending of government bushfire funding says there is a discrepancy in claims by the National Bushfire Recovery Agency https://t.co/I2EraJhVtL (3 hours ago)