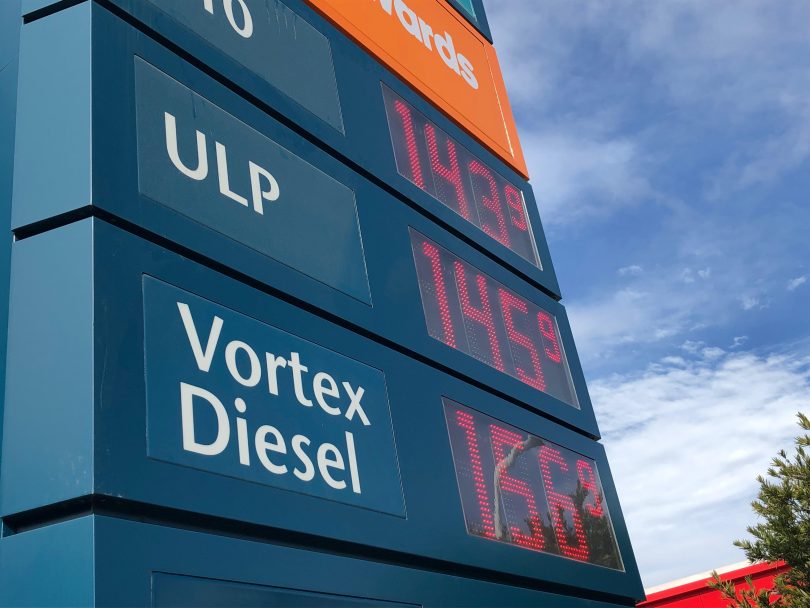 In 2018 the monthly average petrol prices in Canberra were consistently higher than the five largest capital cities. Photo: Lachlan Roberts.

A new report has found petrol prices have dropped in the ACT but Chief Minister Andrew Barr has vowed to keep the pressure on major petrol retailers to keep petrol prices in check.

The average monthly retail petrol price in the ACT has reduced to be almost in-line with Sydney, the Independent Competition and Regulatory Commission (ICRC) report has revealed.

The report showed that petrol prices in the ACT have been consistently higher than in Sydney over the past seven years, with Canberra’s monthly average price around 8.4 cents per litre higher.

The average monthly price difference between Canberra and surrounding towns widened in the last six months of 2018 but has narrowed over 2019 to be 0.4 cents per litre in May. 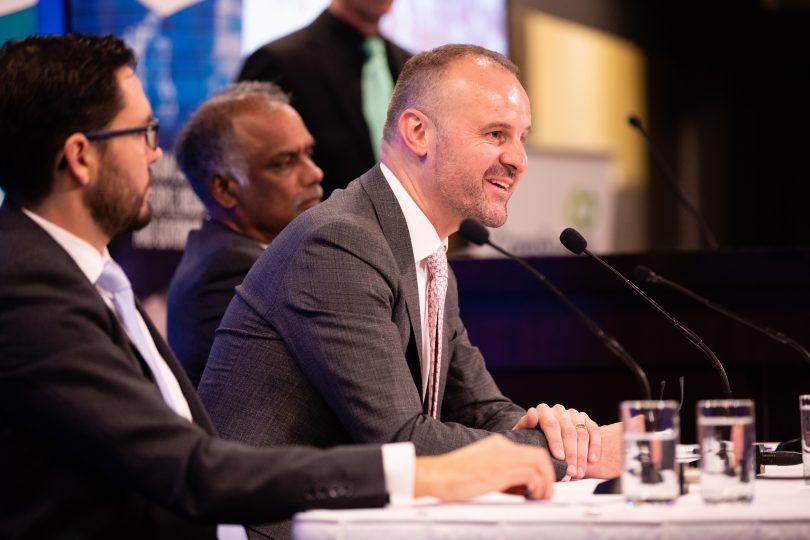 Chief Minister Andrew Barr said the report shows that most Canberrans are “getting ripped-off at the bowser”.

“The evidence and information from the ICRC’s investigations show the market is not serving our community, and service stations are charging motorists higher prices than in other cities and the surrounding region.

“Canberra service stations are making nearly twice the profit of petrol stations in nearby regional locations.”

The report said that the ACT’s concentrated retail petrol market and a low number of independent retailers with a “business strategy to aggressively discount” are two of the factors behind Canberra’s higher average monthly petrol prices.

The report said it also reflects the “relatively poor visibility” of many petrol stations in Canberra (in that they are difficult to locate), making it difficult for consumers to compare competing retailers’ prices.

Mr Barr has advised the Legislative Assembly to consider the merits of a standing enquiry into petrol prices in the ACT, with the same powers as the ICRC to compel financial documents from companies, before releasing its final report and recommendations later this year.

Mr Barr said the report confirmed that proposals such as fuel watch schemes that lock in daily prices, as seen in other jurisdictions, will be unlikely to lead to lower prices and can reduce market competition.

“It appears the scrutiny of the ICRC and the extraordinary powers it holds to compel companies to hand over financial records has made a difference to the prices being charged to Canberra motorists,” he said.

“We need to ensure this continues and providers don’t unjustifiably hike their prices.”

However, Opposition leader Alistair Coe said the Chief Minister’s suggestion for the Legislative Assembly to initiate a standing enquiry was a “cop-out”.

“It is fair to say that there is no silver bullet when it comes to reducing petrol prices within the ACT,” Mr Coe said. “To think that an Assembly committee will be the answer, I think is a bit of a cop-out.

“There are some very practical things the ACT Government can do, such as making sure there is real-time price publishing. It is complex and there needs to be a range of solutions or initiatives to put downward pressure on prices.

“It simply does not stack up that places like Bowral have considerably cheaper petrol than Belconnen. Unfortunately, I wasn’t surprised by the price differences because the gauge has been happening for so many years.

“Canberrans have become accustomed to it and for a lot of people, it is just another blow to the cost of living in the ACT.”

Biggest problem here is the price remains static. Interestingly for the school holiday period and the 2-4 weeks prior fuel was cheaper here in Canberra than in Sydney (and yeah know someone will tell me they paid $1.20 somewhere or another but talking the price most stations charge). But in the past 1-2 weeks Sydney has gone into another discount cycle where prices have dropped significantly.

But look at petrol spy and the prices in newcatle and Wollongong have not followed suit and are on par with most servos here.

Now the question is why don’t we get the discount cycles or why is pricing in Sydney so cyclical.

Everything else in Canberra (particularly government taxes, fees, charges etc.) is terrifically affordable, and great value for money, so it’s good to see the petrol pump rip-offs finally being dealt with……..

paid 1.35 for diesel in Crookwell now and each week for the past month

I’d be much happier if they matched tap beer to be the same price per litre.

Not Lanyon. They NEVER drop here

133.7 in Costco which is usually the cheapest in Canberra and typically 140+ everywhere else.

I haven’t seen a change.

Top of his list, hasn’t paid for fuel in years, and even if he did, with his salary, wouldn’t care anyway

The retailers must be shaking in their boots with that sort of pressure!

Yep he will keep the pressure on alright.... on everyone in the ACT by putting up rates by 8% a year.

Keep pressure on Retailers??? How??

yeah this is a question i want answered as well

HiddenDragon - 9 hours ago
"The ACT needs home-grown solutions that fit with its culture and the aspirations of its people and origins, not imported min... View
Gabriel Spacca - 11 hours ago
Well I feel sorry for those who are coming here to escape the anthills of Sydney and Melbourne. The current government is try... View
Marc Edwards - 13 hours ago
Ian Bushbell is about 50+ years to late View
News 11

HiddenDragon - 10 hours ago
In light of this - https://the-riotact.com/act-government-systems-not-rated-to-receive-security-classified-information/430823... View
Acton - 14 hours ago
You hope. I admire your trust in the efficiency and perpetual good will of an indulgent government. However, you have forgott... View
Acton - 14 hours ago
“Those who would give up essential liberty to purchase a little temporary safety, deserve neither liberty nor safety.” Be... View
What's On 5

Roslyn Russell - 14 hours ago
My little granddaughters will adore it! View
News 4

chewy14 - 16 hours ago
Yeah these claims about human rights are ridiculous. Whilst I support voluntary euthanasia, our elected government does not.... View
Acton - 18 hours ago
I agree with our need for easy access to voluntary euthanasia as decided by the individual and not vetoed by anti-choice reli... View
Property 2

@The_RiotACT @The_RiotACT
Meet Linus, a cat who has had a tough start to life and is at @rspcaact waiting for a special owner who has plenty of time & patience to help him settle into his forever home https://t.co/o8YjOFw68q (11 hours ago)

@The_RiotACT @The_RiotACT
Here’s your chance to snap up a delightful, established home in a sought-after area with views galore and close to schools, shops & childcare https://t.co/ers2rZj1x7 (12 hours ago)