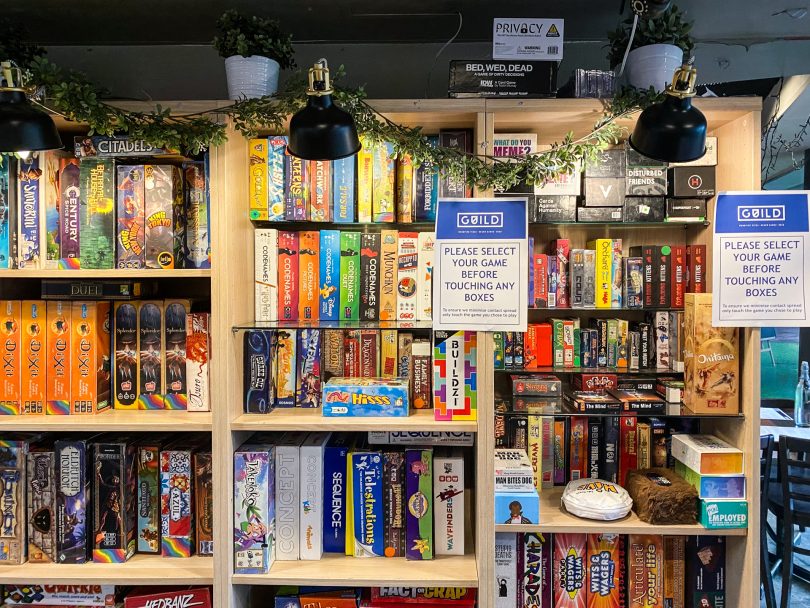 There are plenty of board games to keep you occupied at Guild. Photo: James Coleman.

Food and games. I’m very much of the mind that the two should be kept apart, mainly because it’s gross.

The idea of grease and crumbs going all over a layout of Catan sets my teeth on edge, almost as much as the sight of someone wolfing down a hamburger while at the wheel of a car.

But there is no doubt that one after the other – with some basic hygiene in between – with good food followed by a board game is an ideal way to spend an evening with friends and family.

What we normally do at this point is head straight to a food home delivery app, however down a flight of stairs, tucked away on Bailey’s Corner in the city, Canberra may have its best-kept secret.

It’s called Guild, and it’s pitched as a purpose-built board game restaurant.

That said, you do have to pay a $5 surcharge for each game, presumably because someone has to clean all the grease and crumbs off them afterwards.

But let’s get our priorities in order: food first.

While its board games are the unique selling point for Guild, there’s a veneer of Italian. The menu consists of wood-fired pizzas, pastas and other pub-type food with a di classe touch. 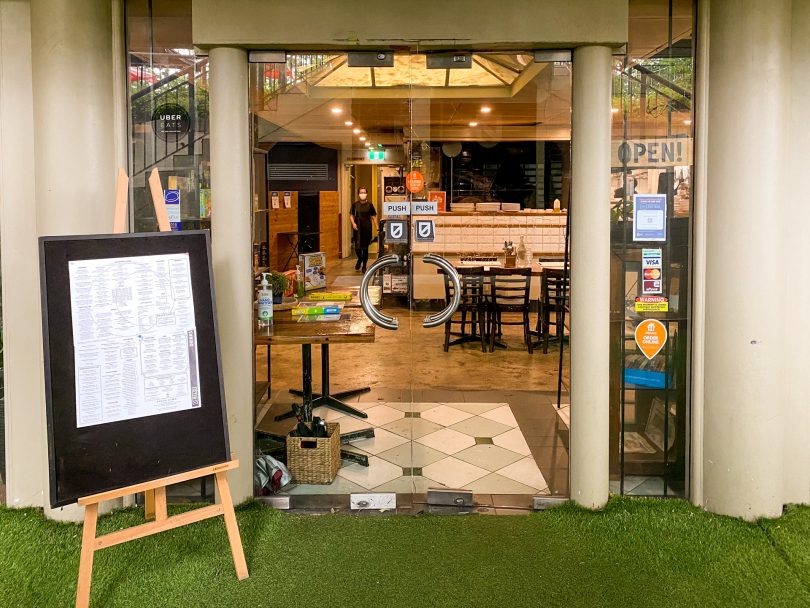 Guild is tucked away downstairs at Bailey’s Corner in the city. Photo: James Coleman.

Upon my visit, my group of five alight on chicken bites crumbed in corn flakes for their entrees, before I painstakingly select the fried calamari, topped with a sprinkling of salt and rosemary.

At this point, some water spillage draws our attention to the table, which feels like it is connected to the ocean, pitching and yawing whenever we lean a little too hard on it. Not ideal for the oncoming food and drinks, let alone board games.

But the waitresses are forever keeping an eye out and are ready to pounce into action. One of them quickly grabs a wad of cardboard coasters from another table and jams it under one of the legs. Problem solved.

We have arrived early so the restaurant is fairly quiet at this point on the Saturday evening. The entrees arrive in no time, and they are generously sized.

Calamari can often be quite chewy, but both my knife and my teeth have no trouble sinking into this serving. There are good noises coming from everyone who ordered the chicken bites, too. 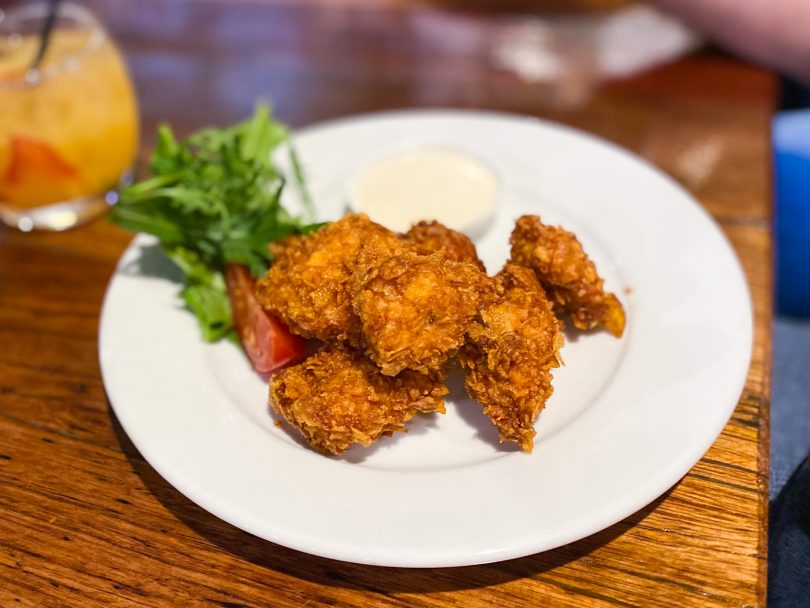 Chicken bites crumbed with corn flakes are on the entree menu at Guild. Photo: James Coleman.

For the main meal, the others go for pizzas but I decide to put the finest of Italian cuisine to the test and order a chicken parmigiana. This will go nicely with my BentSpoke beer.

This order takes a little longer to come so we select our first game from a dedicated shelf at the end of the room.

It’s a very nice atmosphere at Guild: casual and homely.

As far as I can tell, all the food is prepared onsite. The room is dominated by its pizza oven and the view from our table goes straight into where the sausage is made.

The Guild staff all appear to be having fun on the job, while ever professional and courteous. If the instructions for a game leave you flummoxed, they’re always on hand with guidance. 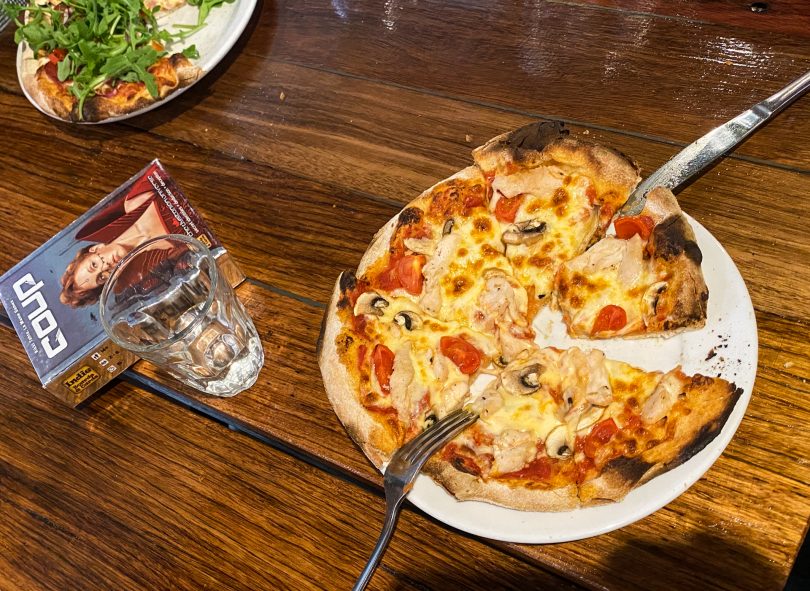 The pizzas come in two different sizes, outlined by circles on the menu. ‘The Guild Master’ is effectively the house pizza, topped with pepperoni, bacon, roasted capsicum, mushroom and onion, all buried under a layer of rocket.

The game puns start coming with the ‘Chicken Cha Cha Cha’ pizza which is pretty straightforward with chicken, cherry tomatoes and mushrooms. The ‘Gamberi’ offers the best of both worlds, with prawns and chorizo on the one pizza.

In some good news, common pizza shortcomings of a base that’s too chewy or crunchy, or sparingly topped, are not to be found here.

As for my parmi, I can’t complain. It comes with a choice of gravy which initially strikes me as a little strange, but instantly makes sense the moment you catch sight of the accompanying chips. Chips and gravy is a match made in heaven.

Once the meal is finished and hands are cleaned, a few rounds of Codenames and Exploding Kittens brings the fun and relaxed evening to a close.

The bill comes to $200 for the five of us so the experience doesn’t exactly break the bank. A win all round.

kenbehrens - 7 hours ago
A few years ago when we were visiting our son in Sydney, there were blankets and items of clothing under shelter on the stree... View
jwinston - 7 hours ago
harcm said “tim_c – what a load of rubbish you talk. What if your schooling was completely disrupted by domestic violence... View
Acton - 7 hours ago
The money you are giving out of misplaced guilt to a street beggar is just funding their drug, smokes and/or booze addiction.... View
News 1