Plans announced for new 250-room hotel in the city 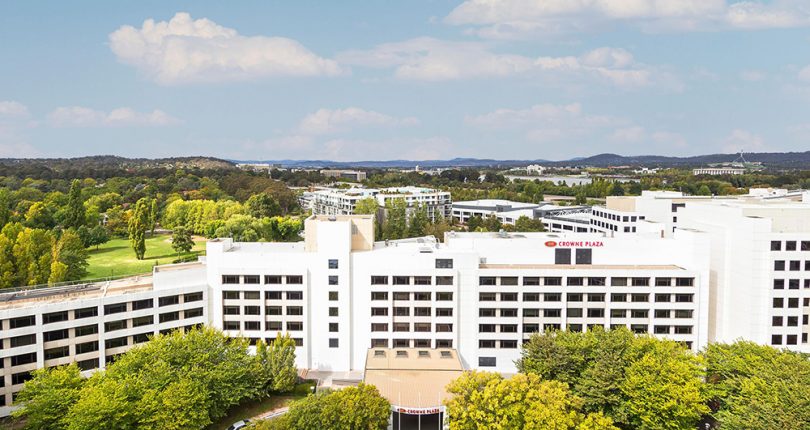 A new 250-room hotel is planned next to the Crowne Plaza Hotel. Photo: Supplied.

Plans have been announced for a new 250-room hotel development in the city that will be pitched at the middle of the market and open in 2021.

Melbourne-based property investment firm SB&G Hotel Group is behind the proposed $50 million development next door to its Crowne Plaza Hotel on Glebe Park, and near the planned $307 million redevelopment to transform the Casino Canberra precinct.

A spokesperson said the site was directly adjacent to the Crowne Plaza and was currently a car park.

SB&G said having two IHG-managed hotels housed on the same site would allow it to broaden its offering and further tap into the corporate market and the growing number of tourists coming to the national capital.

“While the Canberra market has been strong over recent years, the majority of hotel supply that is planned is upscale, with the midscale market remaining under-serviced,” he said.

“With faster check-in and breakfast for everyone, Holiday Inn Express gives guests a simple, engaging place to recharge and get a little work done. We think it’s a great fit for Canberra’s savvy traveller,” she said.

The company behind the casino, Aquis, says it wants to turn the current Casino Canberra and surrounding area into a leisure and nightlife precinct but the project has been dogged by delays in getting Government approval.

How can anything positive be written about yet another boring piece of Lego architecture for Canberra ?

Who's getting the kickbacks.

That sunk with all our hopes and dreams

Yeah why not. ....apartments on Capital Hill perhaps " an eyesore coming soon "

Carole I think you will find the carpark is a small one and it is not government owned now.

The government has nothing to do with this except providing the approval in line with planning policies.

And why not ? ... just fill in all the open spaces

Jesus, how many more carparks are going to be built on???? Where the hell are we supposed to park!!!! The ACT government are in self destruct mode, screw them and their "development" policies, it's all about money, not the future of our city. 😭👿💩

I don't think car parking is requisite for modern cities. Times are changing - being gridlocked, burning fossil fuel, while sitting in an overpowered two tonne metal box, will be consigned to our dystopian past!

Just hope it has some sort of style!!

Which carpark are they talking about, the small one at the back?

AirBNB will kill them.

Nah - Air BnB can't cope with tour groups, and some employers will only pay a legitimate business for business trips.

Patricia Russell - 1 hour ago
Could have been done so much better. View
chewy14 - 2 hours ago
Acton, I don't agree that an audit might only find minor fraud, but it's debatable. It will definitely find that the scheme w... View
Acton - 3 hours ago
A review will find some minor fraud but the main rort was the whole scheme itself. It fails on equity and efficiency grounds.... View
Community 51

Liv Miller - 1 hour ago
Sure is a wonderful and kind thing to do... People don’t realise that there are homeless women here too. It’s so so cold... View
Rachel Edmondstone - 2 hours ago
Liv Miller what a beautiful heart these people have! These are big, BIG things to women in need 🌻 Well done to the whole t... View
Juanita Tee - 12 hours ago
David Keir what are you specifically doing for them 🙃... View
Business 6

Roger Kropman - 4 hours ago
This is a disgrace but it reinforces the point that rubbish dumps / tips should be free to dump your trash, otherwise idiots... View
Nick Savino - 8 hours ago
CCTV and fine View
News 161

Mark Johnson - 6 hours ago
If it’s not licenced what’s it doing on a roadway anyway … View
Julie Macklin - 11 hours ago
Alicia Conley The ACT has no cycle paths. They are shared paths. Yes, those around the lake were built with people on bikes i... View
chewy14 - 11 hours ago
"That they are public doesn’t mean there are no rules for using them." Exactly my point. That the rules should preclude cyc... View
Community 16

@The_RiotACT @The_RiotACT
A lack of affordable housing and increasingly desperate would-be tenants has combined to create perfect conditions for scammers in the ACT rental market. Here's what to look out for https://t.co/P3xXhcACC1 (55 minutes ago)