UPDATE (11:24 pm): Mark has been found. Police would like to thank the public for their assistance.

ACT Policing is asking for the public’s help in locating missing 41-year-old man Mark Warburton as they have serious concerns for his wellbeing.

Police and Mark’s family are concerned he may be suffering from a serious injury that requires urgent medical attention and are urging the public to assist in locating him. 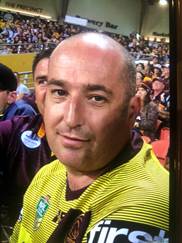 Mark was last seen at his home in Moncrieff at about 6 am yesterday, Friday July 20.

He is believed to have been driving a black Toyota Camry bearing ACT registration plates YKN04M.

Mark is described as having a shaved head, an olive complexion, and brown eyes. He is of solid build and approximately 175 cm (5’9”) in height.

He may be wearing a football jersey and tracksuit pants.

Anyone who has seen Mark or who has any information about his whereabouts is urged to contact ACT Policing on 131 444.

Ian McLeod - 43 minutes ago
Charles Godworth yes I do and I also upgraded to three phase and will install a Zappi charger, but most won't need it. The po... View
Ian McLeod - 59 minutes ago
Ben Garden which is what I'm doing and around town 2KW home charging is fine View
News 27

Robert Taylor - 47 minutes ago
I suppose it was unsafe and could not be kept for pedestrians & bikes. Sad View
Stephen Murray - 3 hours ago
I remember the punt that the bridge replaced. View
Christopher Cuba Rabanal - 5 hours ago
I’ve heard the best fish and chips in the bay is closing due to the lockdowns. That’s pretty sad 😢 View
News 27