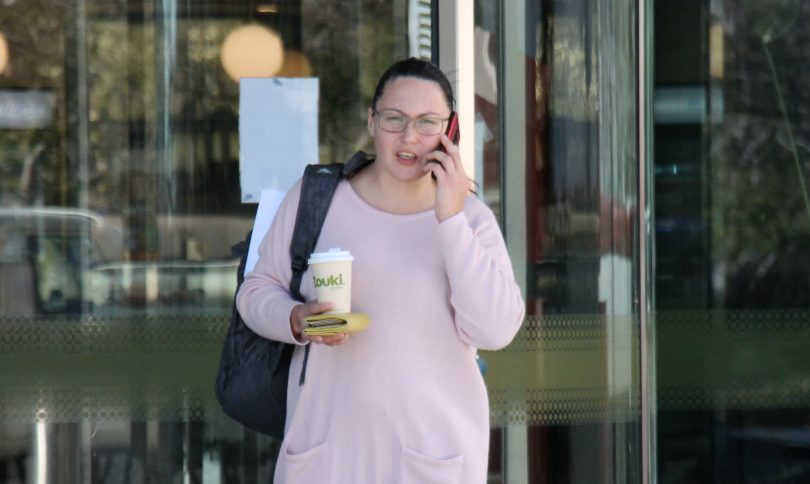 A woman, suggested to be a sovereign citizen, will face a hearing next year over allegations she wouldn’t comply with COVID-19 safety directions.

Elvira Shagabuddinova, who gave her last name as Useinova in court, was arrested after an incident on Sunday (1 August) at a store in Tuggeranong.

ACT Policing alleged she would not sign into the store using the Check in CBR app.

The store manager asked her to leave, but she allegedly refused, and police were called.

Police said that despite repeated requests, Ms Shagabuddinova still refused to check-in and was arrested.

She first appeared before the ACT Magistrates Court on Monday (2 August) before being taken to hospital for a mental health assessment, but she returned to court on Thursday and Friday after being assessed as having no mental illness.

Communication was an issue from the beginning as her first language is Russian. Chief Magistrate Lorraine Walker eventually requested the hearing be delayed by a day to obtain the services of an interpreter.

But before then, Ms Shagabuddinova questioned whether Magistrate Walker had the right to judge her and asked about political immunity.

“I believe I’ve got rights to protect my private information,” she said.

On Friday, prosecutor Elizabeth Wren said, based on what Ms Shagabuddinova had told the court and police, she had suggested she was not bound by laws of the territory and appeared to be, for the lack of a better term, a “sovereign citizen”.

Ms Wren alleged she told police she was not required to comply with the health directives.

Broadly speaking, sovereign citizens believe they are not bound by government laws.

“Does the judge have the right to judge a person who’s alive, a man or a woman?

“Is this court sovereign? If yes, please present the documents.

“Does the judge or the court have unlimited financial liability?”

Ms Shagabuddinova eventually said she wanted to proceed to a hearing, so the court found she entered not guilty pleas to her charges.

The charges were failing to comply with a direction without a reasonable excuse and failing to provide her name or address. There was also a charge of trespassing at a St Vincent de Paul store in Greenway.

Magistrate Walker ordered her to be released from custody without bail and adjourned the matter for a one-day hearing on 20 January 2022.

Does this story imply that she emigrated from Russia to Australia? Doesn’t that process entail documentation that she will abide by Australian laws therefore contradicting the basic premise of a “sovereign citizen”?

There’s still heaps of people ignoring the qr codes. Just saw a suit wearing fellow in Big W Woden run past the greeter into the shop full speed. His public service pass flying in the wind

I’m guessing little Miss Sovereign Citizen is living here because of the lack of freedom in her native Russia.

A word of advice for the courts – please don’t be cluttered up by these ridiculous people. Fine them and, if the fines aren’t paid, lock them up ($1000 = 1 week incarceration).

This article begs the question – Is this the first time Ms Shagabuddinova has entered any premises since QR code (or manual) recording became mandatory in the ACT? Or is this the first time she has encountered premises which follow the requirement to ensure details of all who enter have done what is required?

Capital Retro - 30 minutes ago
Good luck with that. I suggest you read up on "social disamenity" from waste odour and commence a class action against the AC... View
Opinion 61

‘Don’t you dare’: sovereign citizen protesters cause chaos in court

@the_riotact @The_RiotACT
Has your #dog ever become stuck in a toy? A Canberra vet warns it may be more #dangerous than owners realise https://t.co/TJBn419eB7 (16 minutes ago)