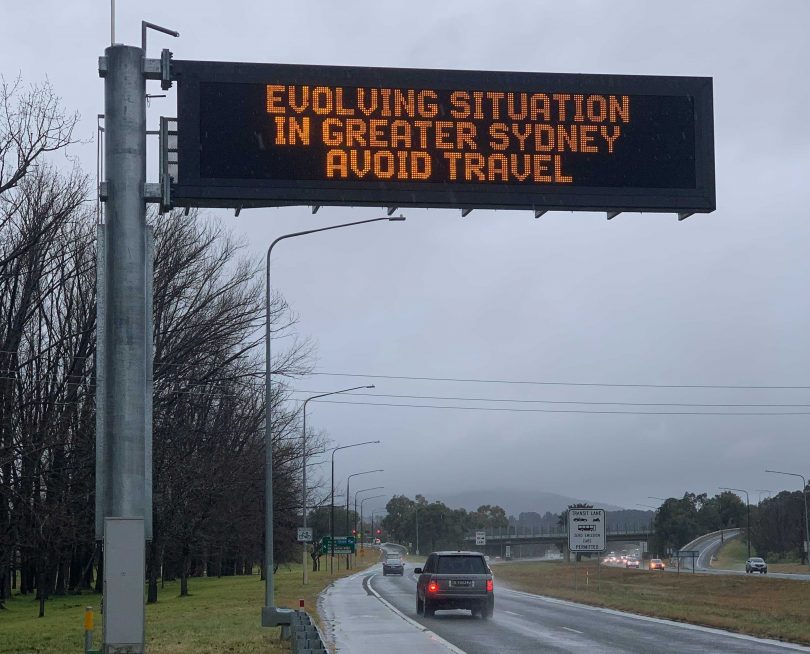 For several weeks, ACT residents have been advised against travelling to Sydney. Photo: File.

A 24-year-old woman from Paddington, Sydney, who flew into the ACT without a valid COVID-19 exemption, has been arrested in the early hours of the morning, ACT Policing said.

The woman is believed to have arrived on a flight from Sydney at around 8:00 pm last night and it was determined that she did not have a valid exemption to leave the Greater Sydney area.

She was taken to a hotel at the airport and ordered to remain there at her own expense before being escorted onto a return flight this morning.

But just before midnight, hotel staff told ACT Policing that the woman had guests and was preparing to leave the hotel. Police say they followed her in a rideshare vehicle from the hotel before stopping the car on Kings Avenue.

The woman was then arrested and escorted to the ACT watchhouse. She will face the ACT Magistrates Court today, charged with failing to comply with a direction by the Chief Medical Officer.

READ ALSO: A birthday of sorts: one year COVID-free in the ACT

Sydney residents are currently facing stringent lockdown conditions as the city battles to contain a COVID outbreak of the Delta strain.

Mounted police are patrolling Sydney hotspots in a desperate effort to contain the rapidly spreading virus.

Yesterday, Premier Gladys Berejiklian said she could not see how restrictions would ease in the next week without a dramatic reduction in case numbers.

According to NSW Health, Greater Sydney residents are currently not permitted to leave home.

“You must stay home. Only leave your home if you have a reasonable excuse. If you must leave home, stay within your local area. Do not travel outside your local area if you can avoid it,” regulations state.

Non-ACT residents who have been in these regions of NSW are not permitted to travel into the ACT unless they have an approved exemption.

According to ACT Health, exemptions will only be granted in exceptional circumstances, and even if approved, travellers will be required to quarantine at suitable premises or a hotel at their own expense.

Although mask mandates have been lifted in the ACT as of midnight last night, Chief Minister Andrew Barr and Health Minister Rachel Stephen-Smith have described the current Sydney outbreak as a major risk for Canberrans.

Firstly, if Sydney is in lockdown and you can’t travel more than 10km from home, then how did this woman get on a plane, secondly, why are planes flying from a COVID hotspot to Canberra? Is there anyone at the wheel of this mess?

The airport itself isn’t a hotspot and people are allowed to travel from outside the lockdown area to travel as long as they don’t stop in Sydney.

The woman’s guests should be put into two weeks quarantine.

So why wasn’t she treated as a possible Covid carrier?

Because she came from Elite suburb. If she came from southwest Sydney then she could be treated as possible Covid-19 Carrier. Just like in the previous lockdown Barr government had anyone coming from southwest Sydney in quarantine but not Eastern suburbs where the COVID started and spread plus everyone was moving in crowds and having beach parties were not required to quarantine . The reason Was given that in western Sydney people move around a lot.

Poor man,
You have a very vivid imagination to think any of that occurred.

Mark Maddock - 48 minutes ago
"He did complain of feeling a little fatigued but the deterioration happened suddenly is my understanding," Dr Chant said. Mr... View
News 21

tonyoakden - 1 hour ago
I cycle everywhere, I do maybe 50K a week in my car, expect on the Sunday morning I got pinged doing 55 going through Civic.... View
tonyoakden - 1 hour ago
I don't drive down to Civic very often, probably once every couple of months, but I consider myself fairly well informed. I d... View
Finagen_erection - 3 hours ago
Chewy you asked Sam the question. My comment stands; obey the sign and there’d be no fine. Anyone bemoaning revenue raising... View
Opinion 3

Ailsa Turrell - 1 hour ago
I agree - we have higher rates of vaccination here despite it being so difficult to get initially and I have not met anyone w... View
Ed N Joanne Towner - 2 hours ago
Juz Hawke Agreed. We are also fortunate to have a bit of distance from Sydney to make Covid control a bit easier. View
Juz Hawke - 2 hours ago
Definitely agree that Canberrans are mostly very compliant with the Covid rules, and very grateful we are largely unscathed.... View
Food & Wine 7

Milestone Entertainment - 10 hours ago
Is it really that hard to see beyond self and consider the greater good? At this point we all know the rules...at infinituim.... View
Community 27

Trilby Walker - 10 hours ago
It's the same in South Australia.im 56 and homeless living in a tent on the edge of the River Murray near Berri.ive been here... View
show more show less
*Results are based on activity within last 7 days

Sleeping rough on Canberra's streets as the city shivers through sub-zero temperatures is bad enough, but those on the ground...
News 21

@The_RiotACT @The_RiotACT
Deane Richard Roach, who gained infamy for defecating in a pool last year, will remain behind bars until at least next year after he was sentenced yesterday https://t.co/UK05OS0snQ (20 minutes ago)

@The_RiotACT @The_RiotACT
Have you hit a #pothole? You have plenty of friends as the wet weather wreaks havoc on the capital's roads https://t.co/SdXv0PSAil (32 minutes ago)