A riot at the Alexander Maconochie Centre (AMC) involving 28 detainees in May was supposedly caused by drunk inmates, the ACT Human Rights Commissioner said at a Women in Prison forum.

Commissioner Dr Helen Watchirs said she heard the men had been intoxicated and went wild, lighting a fire.

The riot forced guards at Canberra’s prison to use capsicum spray for the first time since the facility opened in 2008 to subdue a riot on 12 May.

The incident started when several detainees failed to comply with orders from corrections officers and began behaving aggressively, a Justice and Community Safety (JACS) spokesperson said.

At least one officer’s station was burned before the riot ended and prisoners were relocated. One accommodation unit was also damaged. 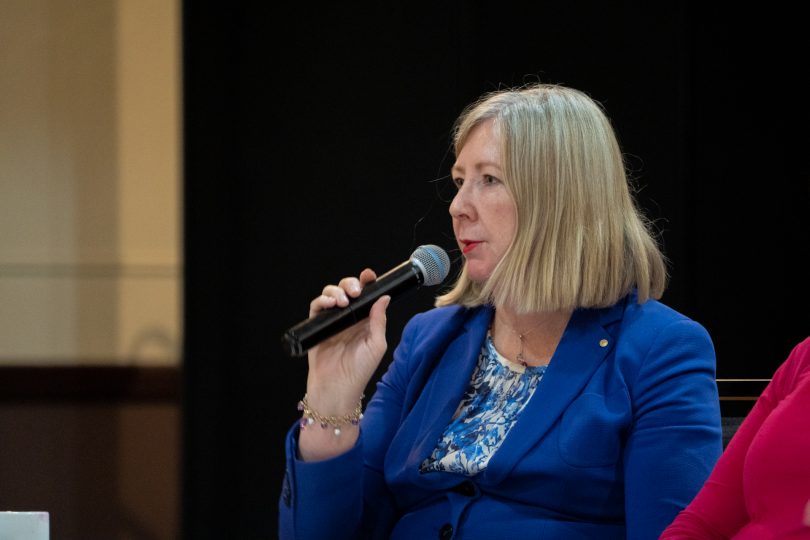 According to a prison guard from AMC, prisoners make homebrew alcohol by stockpiling their daily fruit rations, and there have been multiple occasions when prisoners have been drunk, including during this riot.

Region Media understands that several officers at the AMC were concerned about the stockpiling but had their concerns dismissed as paranoia, leading to further frustration from officers towards management at the prison.

Eight inmates started a violent brawl when drunk last October, during which an inmate’s leg was broken, according to the prison guard.

JACS did not explain how prisoners were able to access alcohol and drink to such an extent in the prison.

In a statement, the Directorate said ACT Corrective Services and the Inspector of Correctional Services are undertaking a review of the incident. The review would confirm the circumstances surrounding the incident.

How about we look at evidence & find out which type of prison works & which doesn’t.
Do we want people leaving prison & going back to the community to be better people or worse people.

The one we have with the revolving door works for the inmates but fails the community.

I know I am being wise after the event, but this decision to open a jail in the ACT has proven to be a disaster. I think we were a lot better off transporting prisoners and having New South Wales deal with them. Their prison system seems to be working well, and we didn’t have the problems with recidivism we have now and local corrective services staff being put into dangerous positions.

I know we can’t go back now, but I wonder what Jon Stanhope thinks about creating this mess in the first place and having his successors down the line being left holding the baby and having to deal with the consequences.

Christine Cox: The prisoners have made the AMC disgusting not the other way around…

If you want to know the truth about life in the AMC then read this: https://www.facebook.com/The-Real-Alexander-Maconochie-Centre-101233661946233

Christine Cox you have to be joking right? That page is obviously run by an inmate of course they are going complain and have a cry… you need to remember the inmates have committed offences some being quite serious why give them anymore right the jail is already a government funded 5 star hotel

Jayden Hackett prison is as punishment not for punishment. You need to do some reading on human right!

Drunk inmates? How about human beings sick and tired of the blatant human rights abuses in this disgusting prison? the failure to even acknowledge the real issues is only going to lead to prisoners escalating their demonstrations further. What is it going to take before the ACT accepts that they cannot continue treating people like this?

Christine Cox how about they try making the jail safe for the officers there. Inmates have a choice to commit Crime or not its solely there fault that they are in there

Jayden Hackett Do the guards not have a choice about where they seek employment?

Christine Cox what type of question is that? OC have one of the most dangerous and hardiest jobs offered by the ACT government and are trained and equipped like they are picking rubbish up from the side of the road OC keep the community safe so we can sleep our night. you obviously how no idea.

Jayden Hackett by the way – Human Rights Principles for ACT Correctional Centres (2019), published by the ACT Government.
“Detainees are sent to correctional centres as punishment, not for punishment. That is, the deprivation of liberty is the punishment that flows from a sentence of imprisonment. The conditions of imprisonment and the management of prisoners are not to create an additional punishment to the sentence.”

What a pathetic article. Prisoners locked in a cage all day everyday abandoning all hope and rebelling against their oppressors… Who would have thought?

what ever happened to bread and water with no tv no computers?? People actually tried to stay out of jail then

Like many things run by this government, the AMC is not well run at all. About time Mr Barr invested some of his stamp duty in a seconed jail, and listened to front line staff. Double sentences of detainees who foul up like this occasion. Even better, run it well. Bring in the Military Police to do it and it will not ever happen again.

The Black Dolphin prison in Russia is a good model to use.

The prison hooch is probably a better option than the intravenous drug use enabled by the ACT Government in there.

Why is the HRC involved? This is obviously a police issue.

Well don’t let them take food back to their cells, feel free to increase their sentences each time they do something wrong too

Janet Ilchef next they will be making knife’s and guns for their great escape. Iol

Greg Hunt I feel sorry for the poor staff – but why is there poor discipline? I’ll read this a bit later when I have more time thanks