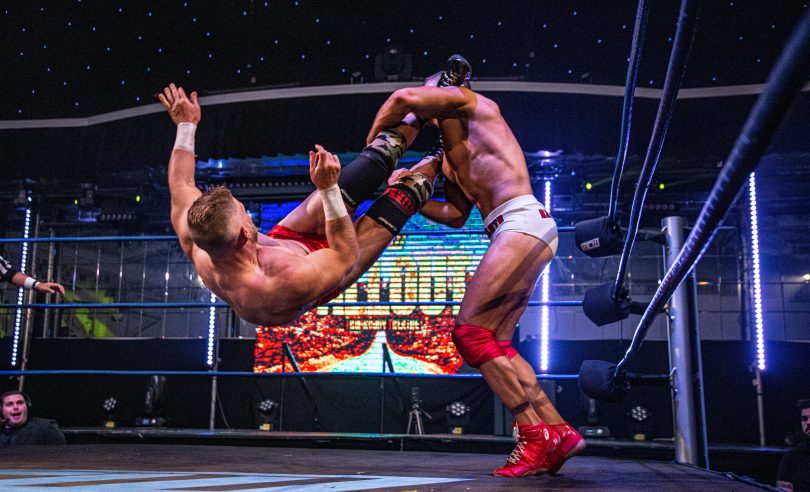 Get up close to the action at Canberra’s Slam Pro Wrestling League event in August. Photo: Digital Beard.

Canberra local Kane Broderick, who goes by the name Mikey in the ring, has had quite the illustrious career in the world of professional wrestling, which he simply refers to as ‘sports entertainment’.

His work has taken him to the professional circuits in both Japan and Canada, as well as securing a job as a stuntman at Universal Studios Japan where he played Arnold Schwarzenegger multiple times a week in a live-action Terminator performance.

Now he is planning on entering the ring in his hometown for Canberra’s inaugural Slam Pro Wrestling League.

Mikey emphasises this kind of wrestling is a form of entertainment.

He says people need to experience professional wrestling before they make up their mind on it.

“A lot of people go, ‘Oh, professional wrestling, those matches are all fixed,'” says Mikey. “But it’s really not what it’s about. It’s a form of entertainment that’s unlike any other.”

In fact, so serious are the organisers about the entertainment element of wrestling they market their events as being suitable for anyone aged between six and 60.

“If it gets too violent, you can really only tap into a small minority of fans,” says Mikey.

“Sure, after every match you’ve got your bumps and bruises, but that’s about it.”

Matches can range from being athletic in style to something that’s more comedic.

In response to a question about exactly how you make wrestling funny, Mikey says it’s to do with how each performer has a different alter ego when they’re in the ring.

“Everyone is a character that’s normally larger than life,” he says. “For example, one of our wrestlers performs as a caveman called Ugg.”

In terms of his own character, Mikey says it depends on where he is performing, but in Canberra he simply plays the local, homegrown boy who crowds tend to get behind.

Mikey’s career took off simply due to an interest he’d always had in wrestling, which didn’t die down even when all his friends lost interest.

When an opportunity arose to travel to Canada where he could work with a former WWE trainer, Mikey and a mate packed their bags and didn’t look back.

“From there, it simply spiralled,” he says. “We trained in Calgary for six months and tried to break into the local circuit.”

After that, he wrestled around the world. Some of his highlights include his time in Japan, where he says the crowds are more respectful than anywhere else he’s performed, as well as the unusual paths his life has gone down.

As well as playing Arnie for Universal, Mikey also did stunt work for local anime productions in Osaka, Japan, which entailed anything from high falls to jumping off a building. He even competed on television show Wipeout in Argentina.

The event on Saturday, 28 August, will be the first time the Slam Pro Wrestling League comes to Canberra, but if its reception around Australia is anything to go by, it will likely be a sell-out.

“Our Sydney, Victoria and Brisbane events are a sell-out,” says Mikey. “Shows in Melbourne have been selling out in less than 10 minutes, up to eight weeks in advance.”

Tickets for the August event went on sale two weeks ago, and 75 per cent are already sold out, although there are hopes the Ainslie Football & Social Club venue’s capacity will increase and more tickets can be released.