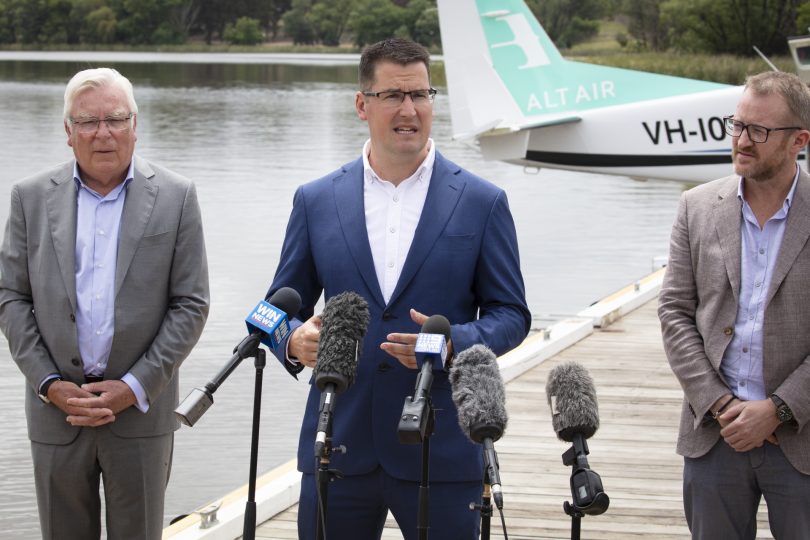 Readers are evenly divided on whether we should allow seaplanes to land on Lake Burley Griffin, according to last week’s poll.

Sydney Seaplanes, which operated a test flight last December, is proposing four daily services between Rose Bay and Canberra, two of which would land on and take off from the lake, tying up at the dock near the National Museum of Australia.

Opponents like the Lake Burley Griffin Guardians say that such a service would set a precedent that would undermine the original intention of the lake.

We asked Should we allow seaplanes to land on Lake Burley Griffin? A total of 833 people responded and votes were almost evenly divided on the topic.

This week, we’re wondering what you think about Zed Seselja’s decision to prevent the ACT from being included in a bill that would restore territory rights to vote on matters including voluntary assisted dying.

When outgoing Coalition Senator for the Northern Territory Sam McMahon announced her intention to introduce a private member’s bill that would reinstate territory rights to legislate on the issue, she originally tried to include the ACT, but Senator Seselja indicated “he wasn’t keen to do that”.

The Howard Government stripped both the ACT and Northern Territory of the right under the Euthanasia Laws Act 1997.

READ ALSO: Seselja ‘not keen’ on restoring the Territory’s right to legislate on voluntary assisted dying

The position puts him at odds with the majority of the ACT’s local politicians: ACT Labor and Greens politicians, and Opposition Leader Elizabeth Lee on behalf of the Canberra Liberals, all signed a letter to all Australian MPs and Senators alerting them to the Legislative Assembly’s unanimous motion calling for the Assembly’s ability to legislate on voluntary assisted dying to be restored.

But is it Senator Seselja’s responsibility to enact the wishes of the voters, or have they elected him on their behalf to make the best judgments he sees fit?

Oiled Pengu said: “He was voted in and has his own viewpoint. Why be upset? That is how democracy works. And no I did not vote for him but I respect the process.”

DB4 said: “In regards to euthanasia laws, our politicians must put their personal opinions aside and do what the people they represent want. Watching your parents die slowly and painfully is WRONG! Give us the choice over how we end our own lives.”

Janise Farrell wrote: “He doesn’t represent the ACT as a whole and it is highly likely that he doesn’t even represent the majority of Christians in the ACT on the issue of voluntary assisted dying. Survey after survey has shown high levels of support among Christians.”

Zed can and should make decisions based on his own judgment and not on whatever is popular at the time.

And he can and should be voted out as soon as possible because his views are so at odds with those of Canberrans.

We need to find a way so that the system doesn’t automatically just give him the majority of the Liberal vote just because he is supported by a majority of Canberra Liberal party members.

Zed is just another bible-bashing Liberal, a good Catholic in this case, and forces his religious views onto all Canberrans. Politics should be separate from religion, but clearly, he does not have the capacity to think with his own mind.

Hi Zed, I support your right to have your own opinions, BUT, you are representing the ACT as a Senator. If you will not support the overwhelming views of your constituents, your proper action is to resign as a Senator representing us. That would be the morally responsible thing to do.

I quite agree with you! We have the right in the ACT to make decisions for ourselves, just as the States do. If Zed doesn’t like the idea of voluntary euthanasia, then nobody is going to force him to take that route should he get a terminal illness. But let others make that decision for themselves.

Capital Retro - 35 minutes ago
Will it be named after Sam Stosur? View
Community 46

Zoe Lewer - 36 minutes ago
Bob Foster yep. Us humans sure have made an impact. We are the problem. You are right. The day the people who were invaded ch... View
Joy Gosden - 43 minutes ago
Yes. What were they thinking planting them in our suburbs. They drop limbs attract pests and stop grass growing around them.... View
Bob Foster - 1 hour ago
Another deluded hypocrite post Zoe Lewer 😂 I'm betting you live in a man made structure....made with either cut down trees... View
Opinion 64

Chris Montgomery - 37 minutes ago
Brian Ashcroft they only blow over cause their root system is higher than they should be. Most eucs that blow over are on fro... View
Chris Montgomery - 43 minutes ago
Gertraud Bell All the big Eucalyps were there before all the housing went in. So??? your saying to remove all native trees an... View
Mark Gledhill - 2 hours ago
how long will the eucalypt hate continue? this sounds like treescrimination to me! View
News 46

phydeaux - 43 minutes ago
Buy the way TheSilver, I nearly forgot to mention this with regard to your supposed other scenario https://pubmed.ncbi.nlm.ni... View
phydeaux - 59 minutes ago
A few points if I may, starting with your first post in this sub-thread where you start: ".... is literally no good evidence... View
TheSilver - 5 hours ago
Yes, I'm aware there are observational and laboratory studies. I am sceptical of those because it isn't obvious how transfera... View
News 1

Why isn’t the ACT allowed to make our own laws about euthanasia?

Probing the polls: Seselja’s choice and arming yourself against COVID-19

@the_riotact @The_RiotACT
The ACT has recorded 620 new cases of #COVID-19 in the 24 hours to 8 pm yesterday. Of those, 61 people are in #hospital, with five in #ICU and one person requiring ventilation https://t.co/yrOFhW3j7d (33 minutes ago)

@the_riotact @The_RiotACT
#Moncrieff residents are pushing for the ACT Government to remove a #smelly and hazardous 'sludge pit' from their backyard. The petition has already attracted more than 400 signatures https://t.co/fW6ONtnb5f (40 minutes ago)