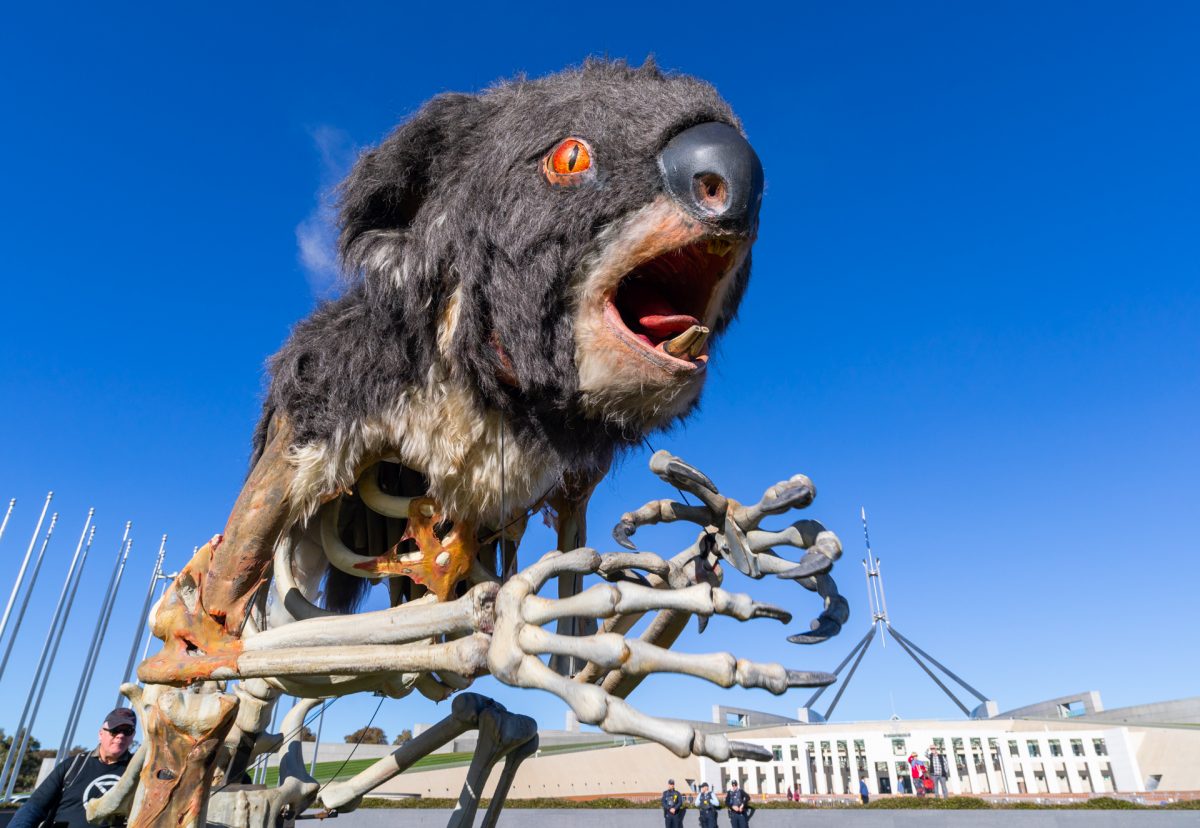 Extinction Rebellion protesters have heralded the arrival of a new Federal Government for its first sitting week with a protest, joined by a four-metre-high part-koala, part-skeleton. Photo: Michele Kroll.

Extinction Rebellion protesters have again descended on the Parliamentary Triangle in the first sitting week of the new Federal Parliament ahead of the introduction of Labor’s climate change bill.

The protesters are expected to cause traffic disruption as they begin marching across Commonwealth Avenue Bridge towards Civic from 10 am this morning. That procession is ongoing. It’s estimated around 20 to 30 people have gathered at the protest.

At 11:30 am they will assemble at the intersection of Alinga St and Northbourne Avenue in the City.

The protesters are marching with a grotesque-looking part-koala, part-skeleton they have named ‘Blinky’.

Blinky is more than four metres high, with red eyes and emits screams and smoke and represents the animals killed in the 2019/20 Black Summer bushfires.

The group wants the new government to declare a climate and ecological emergency.

They have spent the morning protesting on the lawns at Parliament House. 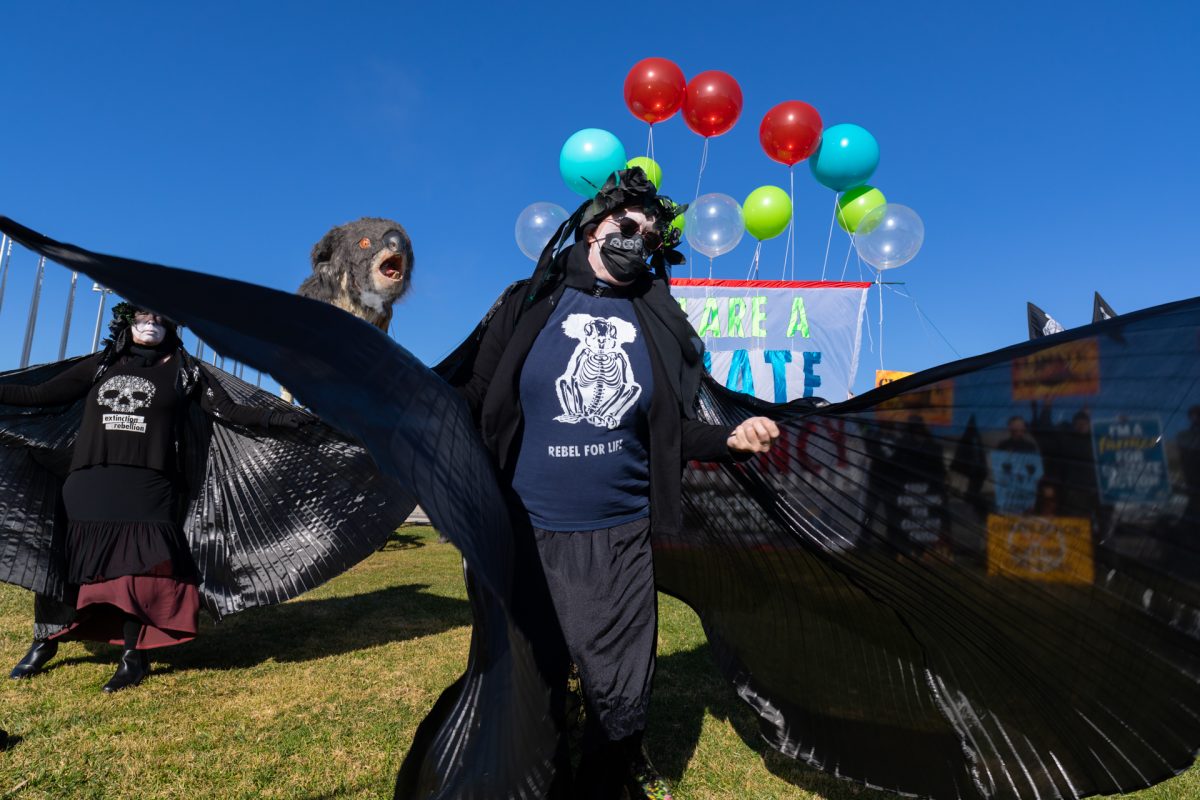 Today, Federal Labor will introduce its climate change bill which will enshrine in legislation its emissions reduction targets of 43 per cent by 2030 and net zero by 2050.

It’s expected the bill will be passed by the lower house within two weeks.

Following days of negotiations with the Greens and the crossbench, Labor has tweaked the bill so those emissions targets can only increase in the future.

But Climate Change Minister Chris Bowen confirmed to ABC Radio National this morning that Labor will not heed the Greens’ calls for no new coal or gas projects.

This followed Prime Minister Anthony Albanese telling 7.30 last night that doing so would have a devastating impact on the Australian economy.

Some Liberal MPs, including Tasmania’s Bridget Archer, have indicated they are considering crossing the floor to support the bill.

In a statement, ACT Policing said it is aware of upcoming protest activity in Canberra.

“While the organisation respects the right to peacefully protest, criminal actions will not be tolerated, and police will respond accordingly when required. Our officers often work with protest organisers to ensure the safety of both the community and protestors,” a spokesperson said.

That koala was totally gruesome and reminded me of the bushfires in 2019. It is scary that our leaders have allowed us to get to the stage of floods fire and pestilence and are still not taking it seriously. I don’t want to see this koala but I guess we need the wake up call. I just don’t know what to do any more.

what a good Idea. Jump in the car travel 5, 10, 20 or 100Km to demonstrate on climate change. Don’t forget to bring your iPhone to take photos to post on Facebook.

Also don’t forget its cold in Canberra so a koala bonfire might be required to keep you warm.

I might save on electricity tonight and build myself a koala bonfire and sit in the back yard with a few beers.

But if they didn’t do that, and flew to Bali for a holiday instead, they would use more. To extend your logic … I recycled a few paper straws yesterday so the climate problem is now solved ….

The actions of these protesters are about as counter-productive to their cause as you could get.

Sometimes I honesty think the majority of them are paid plants from the fossil fuel lobby, their methods are so stupid.

Chewy they are witless left wing idiots, call it for what it is. No need to spruik your conspiracy theories about the “ fossil fuel lobby” whatever that means. Climate change activists have the fewest brain cells on the planet as they sip their lattes, drive their EVs, watch tick tick videos thinking they are doing good for the environment. Not understanding every action they take causes some damage to the environment in some shape or form.

Sam,
Perhaps I should have added the sarcasm font if you couldn’t tell the comment about them being paid by the fossil fuel lobby was a joke.

What an amazing effigy these people constructed and used to such great effect. Its potent symbolism totally outweighs the paltry overall emissions related to its construction and materials. Full points, Extinction Rebellion – you totally rock.

I wonder who funded all those props and the clowns that use them?

Thanks for continuing to bring attention to the Climate Crisis. Spectacle is a great way to bring attention to the need for action. We are running out of time for nice letters, petitions and rallies.
We can see the climate crisis before our eyes, just as predicted but sooner, massive floods, storms, fires, heatwaves, icecaps melting, marine heatwaves.
When the rains stop Australia can expect fires like in the UK. Fires to burn koalas again.
We have a new Government but Labor still takes money from Fossil Fuel donors. We need to keep the pressure up.
Australia is the world leader in exporting coal and gas. We need to replace those industries and jobs now and become a renewable powerhouse, or risk being left behind. We need to redeem our pariah status on the world stage and join the fight.
and…if we make changes now, the change won’t be as painful a if we wait until the world is in total turmoil. We have the technology, we have the skills.

JustSaying is the person who labels everyone who disagrees with him/her as “muppets”.

I love the ridiculous comments from Capital Retro and nobody that actively celebrate the burning of our native animals and the stupid “what about how much carbon they used to ______” argument.

These protestors are trying to get our elected officials to make real change that any other individual is incapable of. They could build 10,000 of these “macabre” koalas and ship them all around the world several times over and still have a negligible carbon footprint compared to the approval of a single new thermal coal mine.

What sort of future are you guys rooting for? A Scorched Earth with ScoMo and his band of happy clappers?

Majoof, XR are hypocrites, travelling around emitting carbon, to protest against emitting carbon. Coal mining will continue for many years yet, as people still depend on it. And in case you missed it, Morrison is no longer PM.

@Majoof
“What sort of future are you guys rooting for? A Scorched Earth with ScoMo and his band of happy clappers?”
That’s exactly the sort of future these muppets voted for, Majoof – which is the very reason that they are a dwindling minority, as ScoMo delivers sermons from the Opposition back bench and the rest of the world moves on.

JustSaying, get real, no one is rooting for a scorched earth.

I suggest you acquaint yourself with the physical geographical history of Australia for the past 50,000 years, Majoof.

If you did you would find that the “scorched earth” Eastern Australia experienced when Scott Morrison was PM is what happens in Australia and indeed if it didn’t the koalas would starve to death because the trees they inhabit would not regenerate without the presence of hot bushfires.

@Nobody … you think I need to get real? Well if the denialists were to hold power that’s exactly what a lame no-action on climate policy will deliver.

Yum, yum, I can smell the Koala cutlets on the BBQ now.

How much carbon was emitted to get that macabre koala up to Canberra? 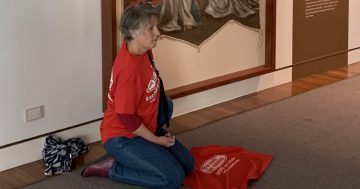