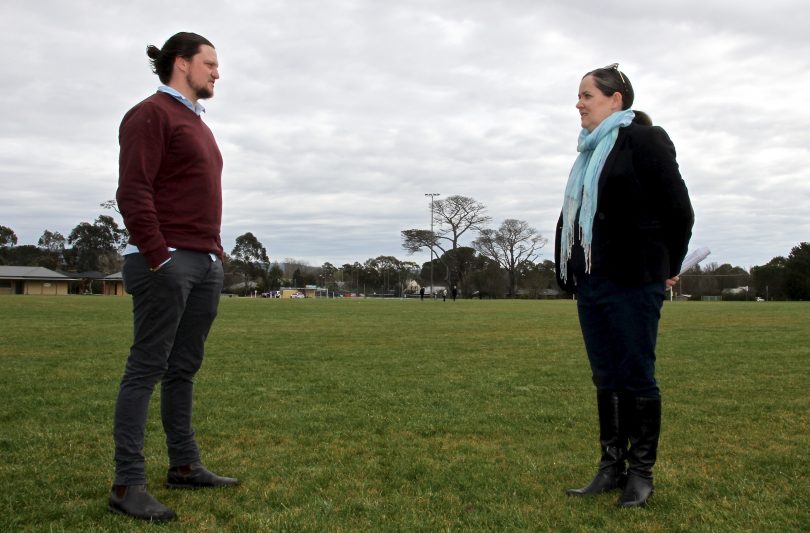 Queanbeyan-Palerang Regional Council (QPRC) has endorsed a proposal from the NSW Department of Education to proceed with the relocation and purchase of council assets required to make way for Bungendore High School.

The project, expected to cost in excess of $10 million, will see more than 400 children in classrooms for the beginning of term one in 2023. The school will be built to eventually accommodate more than 600 students.

The high school will also save local children travelling to school in Queanbeyan or Braidwood. It was formally announced by Member for Monaro and NSW Deputy Premier John Barilaro in Bungendore on 15 August, 2020.

It is expected the first sod will be turned before the end of this year that will see the high school constructed on the Majara Street and Gibraltar Street precinct, adjacent to Mick Sherd Oval.

Following a period of consultation with QPRC, community groups and the Bungendore community, the NSW Department of Education proposal was endorsed during QPRC’s ordinary meeting on 28 October.

A section of Mick Sherd Oval will be lost to make way for the high school, along with a number of QPRC assets, including the nearby swimming pool, Bungendore Community Centre and the proposed Abbeyfield senior housing development that will be relocated to 2 Majara Street. 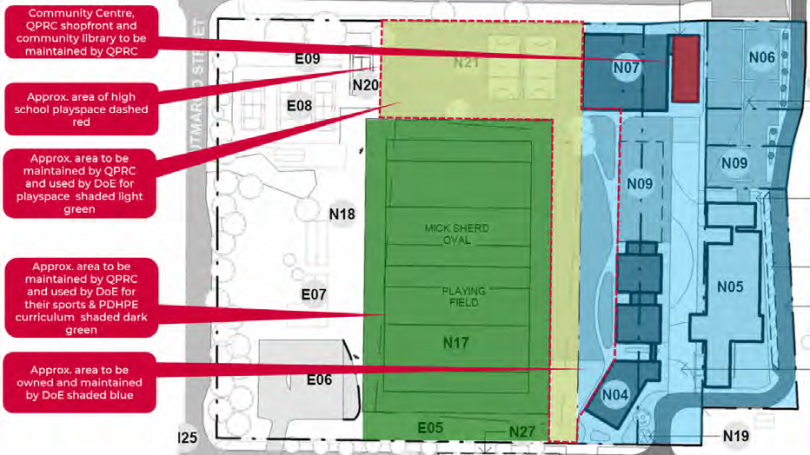 This image shows the distribution of responsibilities under the Bungendore High School proposal. Image: Supplied.

A NSW Department of Education spokesperson told Region Media they are confident the school is being built on the most appropriate site and that engagement with the community and QPRC is on track.

“The Department of Education is committed to opening the new high school at Bungendore in early 2023,” said the spokesperson.

“The project is still at an early stage and the timelines for completion are subject to a number of steps including the Queanbeyan-Palerang Regional Council endorsement for the department to use the site and statutory planning approval.

“The department is working with NSW Crown Lands and council to discuss the land acquisition arrangements and timing.”

The Department of Education also conducted a community engagement survey that saw more than 700 responses as well as a four-day community information hub that involved more than 100 stakeholders.

“ACT schools closed their borders to NSW kids in 2018,” she said. “Queanbeyan is our feeder school for all the surrounding communities and the schools there need to double in size to accommodate all the students from those areas by 2022.” 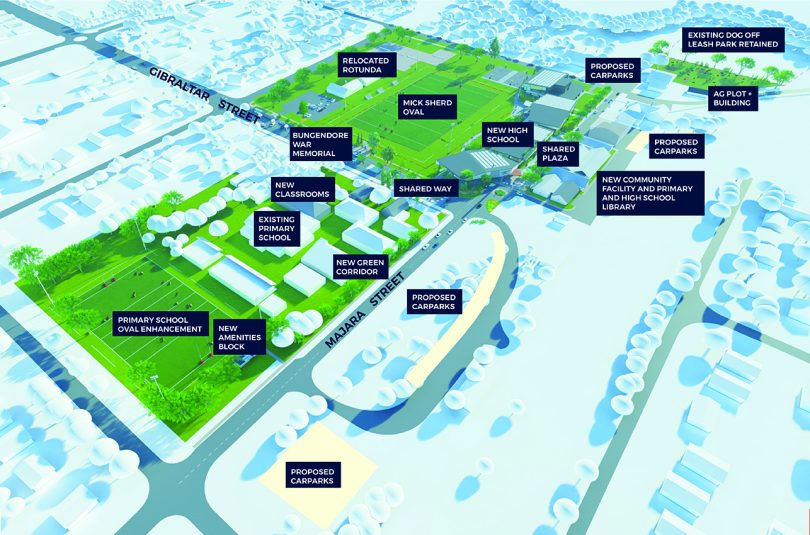 In addition to the high school, three new classrooms will be built to replace existing demountable buildings at Bungendore Primary School, as well as new car parks to offset those lost as part of the project.

Mick Sherd Oval will be slightly realigned to the west to make way for the high school. It will also be closed during the beginning of 2021, but will reopen for the beginning of winter sports.

The swimming pool will be demolished at the end of summer in 2022, while the new aquatic centre at the Bungendore Sports Hub, on a parcel of land to the west of the town, is expected to be ready by the second half of 2023.

The NSW Department of Education’s proposal says the high school will promote continual job growth and shared knowledge within the Bungendore community.

“The precinct offers more than just a school,” said the department’s spokesperson. “It provides the ability for the Department of Education to continue to contribute to a thriving town heart and presents the opportunity to offer not just a school, but new community focused assets for the greater benefit of all of Bungendore weaved into the fabric of the Bungendore town centre.”

The design seems to incorporate the town into the school itself. Shared services like the library also sound like a great idea.

Sandra Naden - 12 minutes ago
Lynne Mortimer , I think you may have a few more than this!! View
Community 17

Kellie Yarrow - 43 minutes ago
We’ve seen some in Queanbeyan on our regular walks. View
AZ Hukic - 59 minutes ago
we have been doing this last few days. My daughter is painting them and we scatter them on our walks around Theodore View
Raeline George - 1 hour ago
Christine Stapleton perfect pens for the job! https://www.kaszazz.com/cart/default.aspx?ConsID=101594&code=7898... View
Motoring 2

James Forge - 59 minutes ago
“Might not be anything special” At least it is low and sleek like cars should be.... View
Ed N Joanne Towner - 3 hours ago
Had one of these and it was an excellent vehicle and great to drive. View
News 13

Lottie Maree - 1 hour ago
I’m in my early 30s and have been told my age is already a barrier in accessing employment. From mid 20s onwards it’s bee... View
Stephen Ellis - 2 hours ago
Craig Butler that’s a huge positive. Shows how people like Damien and me can recall the good times and forgive recent poor... View
Maya123 - 2 hours ago
I've been discriminated against because of age. After being laid off with many others, mostly older workers - I was 51, I app... View
Business 21

Matt Perry - 2 hours ago
Is it a plan to get the the whole state as public servants ? View
Alexei Gorbatov - 3 hours ago
Why we don’t hear that money go to strengthen our hospitals? View
Susanne Levy - 12 hours ago
Hugh Munro our medical treatments and medications are none of anyones business. It is not mandatory . View
Lifestyle 1

Dallas Stow - 14 hours ago
Caitlin mention RebelRebel in Ainslie. Where in Ainslie? I only know the one in Marcus Clarke Street.... View
show more show less
*Results are based on activity within last 7 days

@The_RiotACT @The_RiotACT
The AIS Fitness Centre will not be reopening come the end of COVID-19 restrictions, leaving 200 members annoyed that they weren't consulted over the change https://t.co/SwfCpZJz7z (1 hour ago)