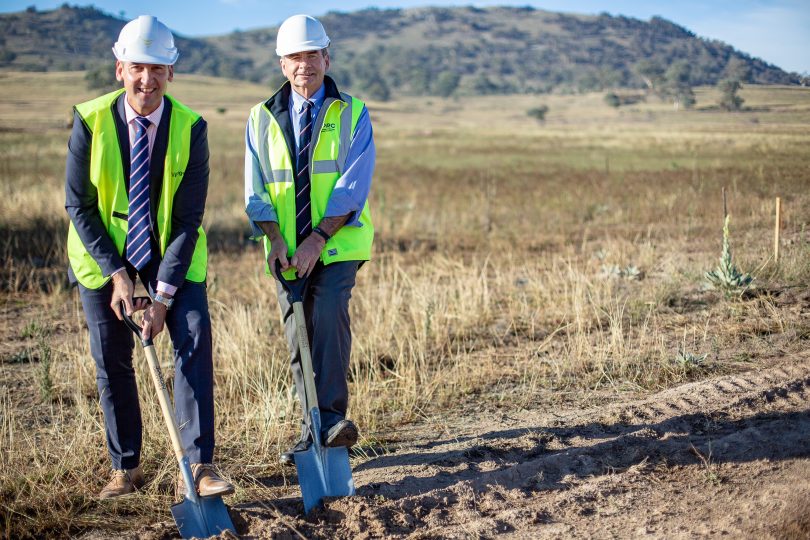 Lines are already being drawn among councillors in the Queanbeyan-Palerang shire, with the council last night agreeing to hold a constitutional referendum to seek voters’ views on having a directly elected mayor at the 2024 election, rather than a mayor elected by councillors.

The motion was put forward by Queanbeyan-Palerang Regional Council (QPRC) Mayor Tim Overall to hold the referendum at the September 2020 local government elections.

As well as their voting slip, voters will be given a second piece of paper asking Do you wish to see Queanbeyan-Palerang Regional Council retain its current number of elected representatives at 11 but introduce a directly elected mayor by the voters of the region, plus ten councillors elected from across the region?

The debate among councillors raged for more than an hour at QPRC’s November meeting in Bungendore on Wednesday night (27 November), before Council eventually voted in favour of the motion.

Mayor Tim Overall has held the position for the last 12 years and told Region Media that voters in the Queanbeyan-Palerang region have a long history of having a directly elected mayor. The first was David Madew in 1980 before that right disappeared when the Queanbeyan and Palerang councils merged in 2016.

“I’m very positive about the motion and I believe all regional councils and metropolitan councils should have a properly elected mayor, as the role of the mayor is to be a leader of the local community and work with them, as well as presiding at meetings and ceremonial events,” Mayor Overall said.

Former Palerang Shire Council mayor and current QPRC councillor, Pete Harrison of Wamboin, said he fears the views of those in the region’s many smaller towns will be diluted by the much larger population in Queanbeyan.

“My concerns are on the impact it has on the representation of the broader community and that the council won’t reflect the community,” Cr Harrison said.

“The reality is that the council will be elected by the majority, but in an environment like ours where there is a spread from urban Queanbeyan to rural towns like Braidwood, Bungendore and Captains Flat, through to a very large rural residential population in areas like Sutton, Wamboin down through to Burra, you have smaller populations that are only about 25 per cent of the total population.

“And so in a statistical sense, you’re only ever going to garner 25 per cent of the vote from those areas.”

Currently, 33 NSW councils exercise the option of a directly elected mayor with another three joining this group at the 2020 elections.

When 20 newly merged councils formed in May 2016, all the new councils reverted to the legislative ‘default position’ of having their mayors elected by councillors for two-year terms.

Mayor Overall has also acknowledged he will not be a candidate at the September 2024 local government elections.

However, Cr Harrison said this effectively reduces the number of votes for councillors by one, and that it is likely one less person could end up being from one of the smaller areas in the shire.

“When it comes to electing a mayor, that is a community decision, but whether you put that to a community as disparate as ours, knowing full well what the result will be, is a question that remains to be answered,” Cr Harrison said.

Cr Harrison said there is also nothing in the Local Government legislation that says there must a broad representation on local councils.

“Councillors could all live in the one street or in the one house for that matter, so there’s no guarantee in this system that you’ll get any kind of balance,” he said.

The debate in council also involved the costs of holding a referendum; however, the mayor dismissed this by saying any costs associated with having a directly elected mayor are minimal.

“The only costs would be the extra voting slip and some marginally highers costs from the electoral commission counting the votes, as well as some costs associated with a mail-out to all the constituents explaining the pros and cons of that vote,” Mayor Overall said.

If the referendum is successful, the directly elected mayor would be in power for a four-year term from 2024.

Why not simply declare the candidate with the highest vote, the Mayor ??

Greg Batten Problem with that Greg he or she might not want that role..

Allan McGrath .. then he or she either gets to nominate another, or it defaults down the list, and so on. My point, I suppose, is that the voters will already have placed the candidates in order of preference by the vote count ... I can’t see them changing that preference if asked to vote again for the same candidates to choose a mayor.

Greg Batten yep no reason why it couldn't work. The position of Mayor of Queanbeyan/Palerang is a full time job and that alone wouldd be enough to deter most councillor candidates seeking to have an influence in local affairs...🤔

chewy14 - 5 hours ago
Baby Boomers are largely self funded? Haha. Is that why a majority of them receive the age pension? Or copious amounts of oth... View
Capital Retro - 13 hours ago
The Fluid Complex should note that interest rates are not going up and higher returns for investment are important to "baby b... View
Belinda Spouncer - 18 hours ago
Jon Billows Canberra has much higher prices for petrol. I have been here for 5 years and was shocked at the prices paid here.... View
News 7

FoodCollective - 5 hours ago
Wonderful news, and great to hear there will be a re-opening of this Canberran food institution. Congratulations Ottoman Cuis... View
David M - 6 hours ago
The reopening was not part of the original story which has been amended since my original comment. I sincerely hope they do r... View
Colin Byrne - 8 hours ago
David M, you state that the business has been sold, but the article states that only the site has been sold and that the busi... View
News 49

Jo Hann - 6 hours ago
Rade Kosa oh dear. "Big pharma" profits far more from the unvaxxed via expensive treatments. The need for boosters is common... View
David M - 11 hours ago
Surely Mr Lans’ judgement is questionable. He may share the conspiracy seeking Senator’s views and that is his right. To... View
Rade Kosa - 12 hours ago
Jo Hann numbers out of the UK. I’ll just leave this here for you. View
News 3

Martin Keast - 7 hours ago
Vaccination primarily reduces risk for the person vaccinated. It is their decision and should not be the concern of others. I... View
Martin Keast - 7 hours ago
It is deeply concerning how the ACT Government has trampled over people's liberties in this way. As it is all about reducing... View
Stephen Winter - 12 hours ago
To right A_Cog If 97% can protect themselves and especially our children then bob and his 3% can go. I've had to use a weeks... View
Property 13

A pair of alpacas has been brought into the Belgian Embassy in Canberra after foxes killed the ambassador's beloved pet...
Opinion 32

It's been less than a week since lockdown officially ended and already I feel like I can breathe easier. Even...

@the_riotact @The_RiotACT
Richard Windsor has always had #photography in his focus so, when fire destroyed most of his #camera collection, what did he do? Like all good collectors, he started #collecting again https://t.co/S67boVVcpX (16 minutes ago)