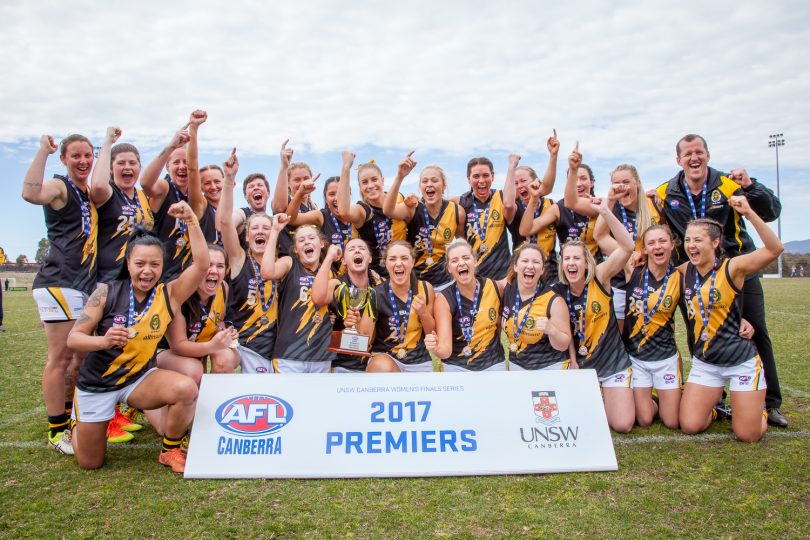 Tigers midfielder Ella Ross was a standout player in the match and was awarded Best on Ground. 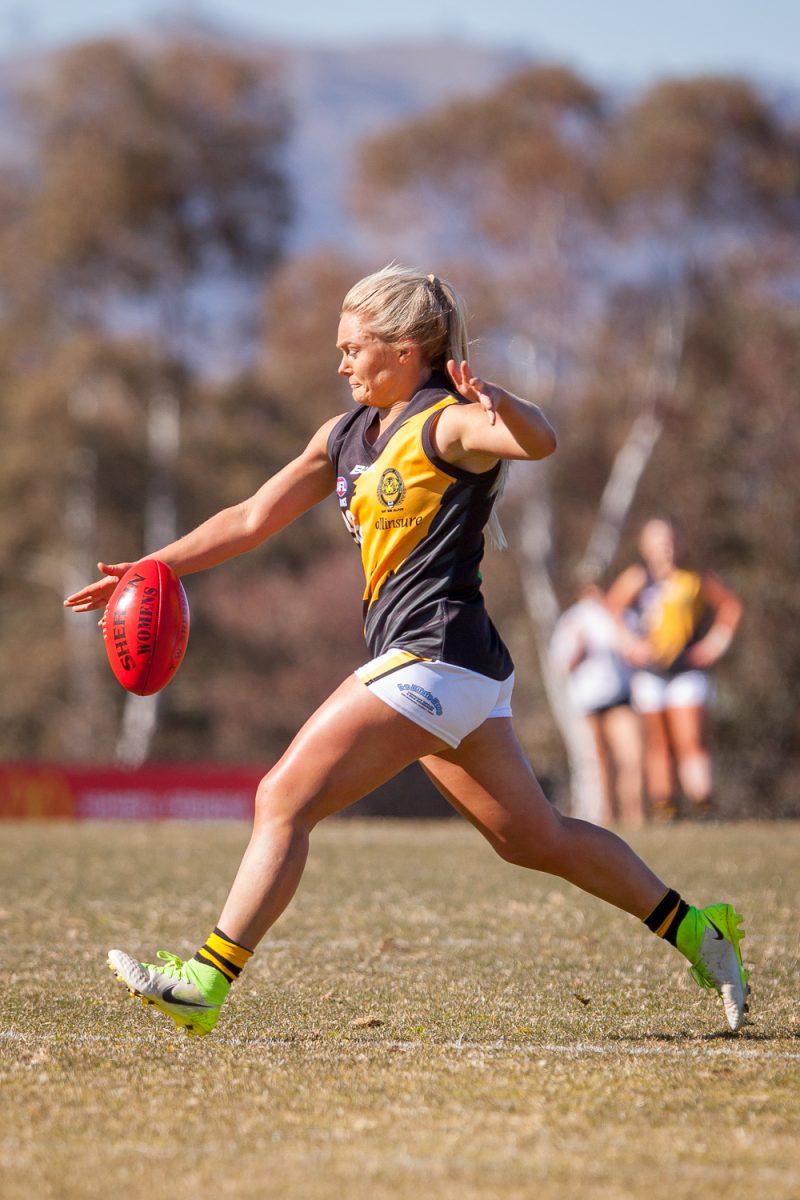 Ross has come off the back of playing in the inaugural Australian Football League Women’s competition with GWS Giants earlier this year.

The AFL Canberra Women’s competition is so strong; any one of the top five teams could have won the grand final said Ross. 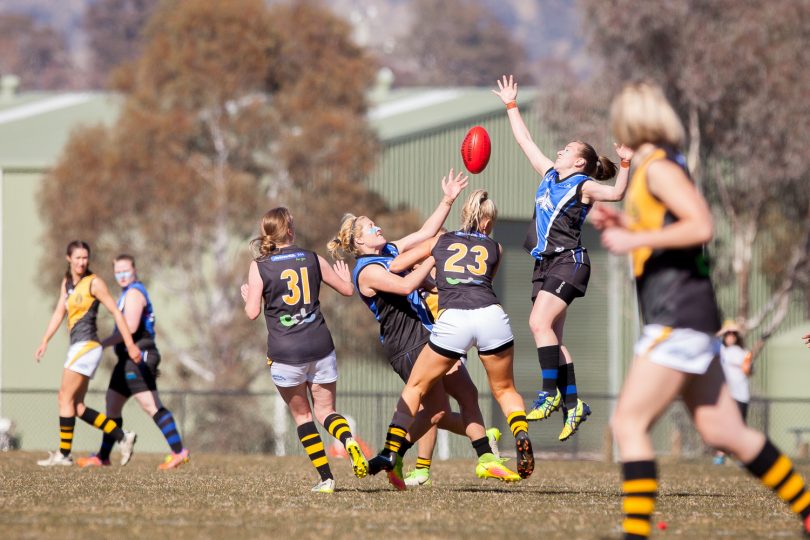 Tigers knew it was going to be a hard game. Photo: Doug Dobing.

“We knew it was going to be a hard game. We knew that [Gungahlin Jets] had strong players all over the field,” Ross said.

“We knew we had to cover all bases around the field.

“We knew we had to have our foot on the pedal the whole way and I think we did that [and] it paid off for us today.”

Ross said that the strength of the Tigers’ team is their club and their culture, as well as the heart they have as a team. 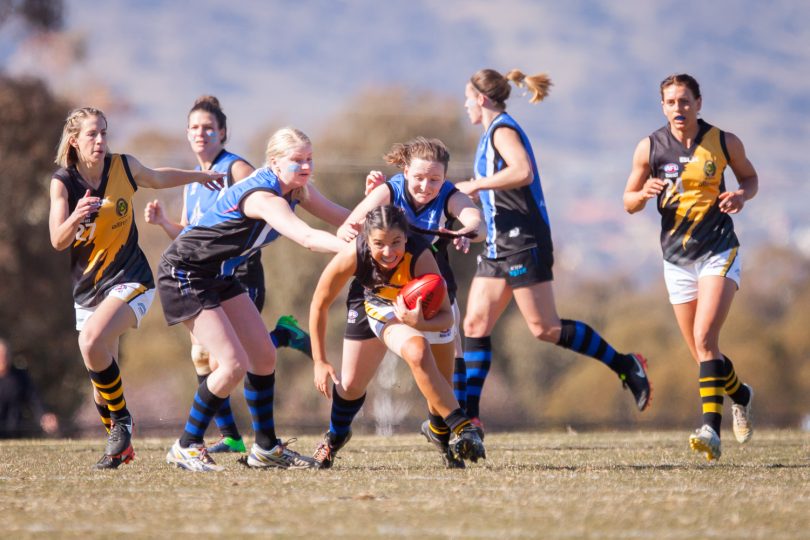 “Running out at half-time when we were behind, we had the whole club lining up on the runout. We looked around and we [knew] we could do this for our club.”

“We wanted to win it, not just for us but for our club.”

Queanbeyan Tigers Captain Hannah Dunn said that the team had worked hard to gain their win.

“We finished fourth on the ladder and then to knock off Ainslie [Tricolours] in an extra time match,” said Dunn.

“[To] smash Eastlake [Demons], the minor premiers,” she said.

“Then to chip away to beat Gungahlin [Jets], it’s just amazing.” 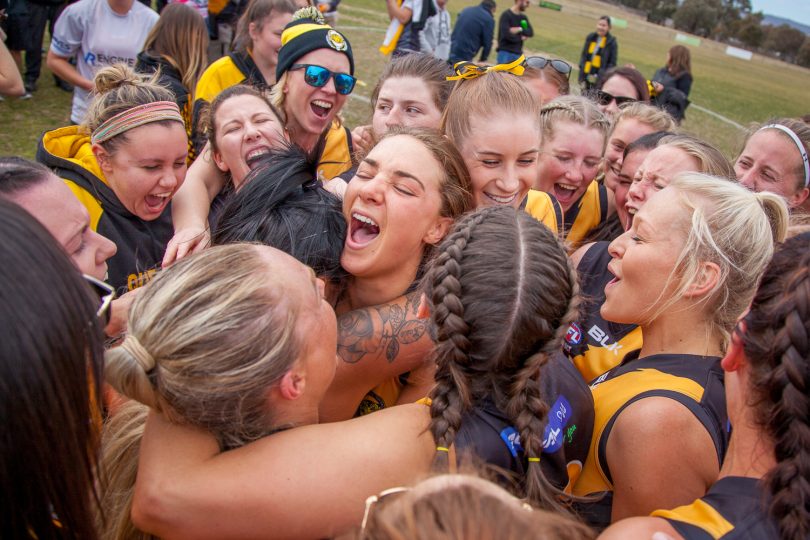 Queanbeyan Tigers Coach Cheyne Webster said the crowd was fantastic and it was a great game of footy.

“Thank you to our supporters [and to] all the people at the footy club that have been behind us all year,” said Webster. 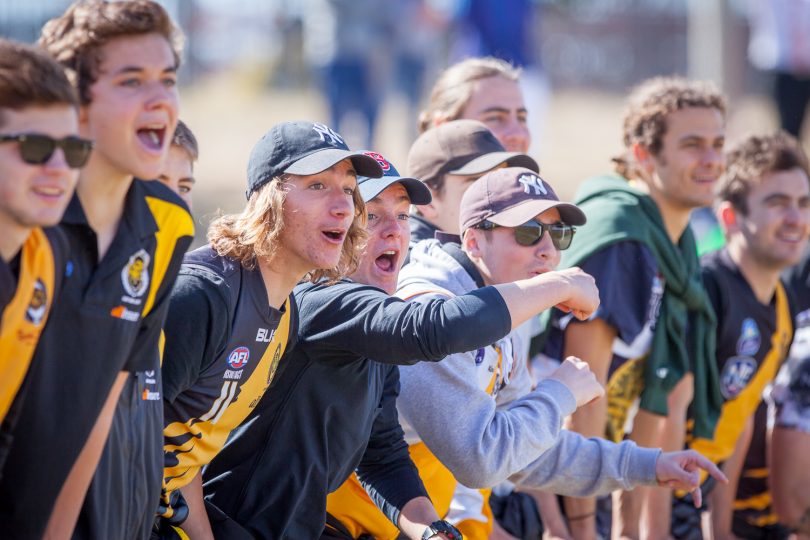 The team worked hard together and their strength was their resilience he said.

“Resilience, I think would be the number one thing.”

“Their ability to be resilient and bounce back when things don’t go their way is fantastic.”

Ross said the AFL Canberra women’s competition is strong and growing and it’s definitely a testament to AFL Canberra and women.

“People need to stop and look at AFL Canberra women because we’ve got great players here that can really go far,” said Ross.

“I remember going to AFLW and people were sceptical about women playing football,” she said.

“But now that it’s come out in the open and people are watching. We’re getting the respect we deserve and people can see the talent we have.

“We’re women but we can still play football.”

Irene Elford - 48 minutes ago
Why is all I can say, if and when they defrost you all your family friends, etc will be gone. View
Katy Did - 1 hour ago
Rachael Axford for these two I reckon😂 View
Phil Andrews - 3 hours ago
I have a bridge for sale if they’re interested!! View
Opinion 178

Rowan Hartcher - 1 hour ago
Alan Hopkins like wise View
Peter Quinn - 2 hours ago
So when can we celebrate colonisation????. Whatever day is nominated it will always be contested View
Alan Hopkins - 2 hours ago
its not that hard to change the day. just do it... View
Opinion 24

@The_RiotACT @The_RiotACT
Can you see yourself relaxing on the deck of this lovely Lilli Pilli home? The stunning elevated property offers the perfect opportunity to kick back & enjoy life https://t.co/exzSAWdrIG (37 minutes ago)