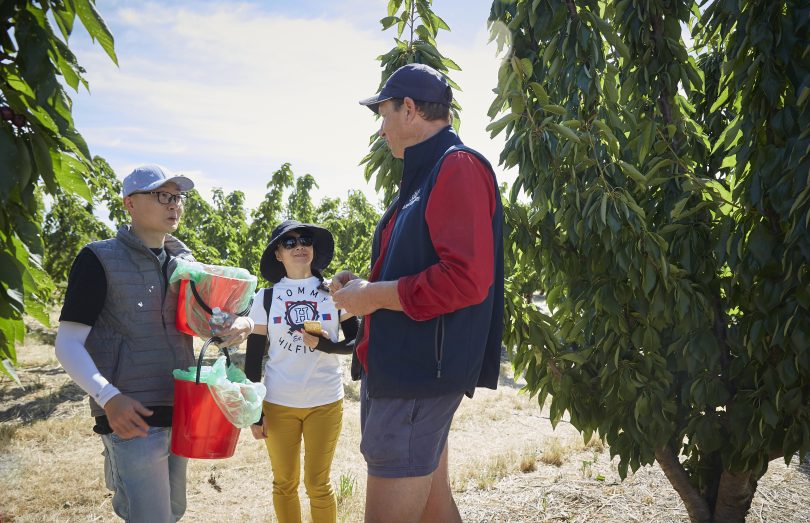 It’s only a matter of days before cherry picking starts at Hall Family Orchard, near Wallendbeen. The orchard – with its export quality fruit – is one of the most popular in the Hilltops region. Photo: Nick Cubbin.

Some Vietnamese community members in Sydney and Canberra are probably on the starting blocks ready to zoom down to Young, NSW, for the cherry season.

According to Chris Hall, from Hall Family Orchards, the trips to the South West Slopes are quick, but very fruitful.

“They’ll put in orders for the whole family and they might drive back with 50 cases to share with everyone,” he says.

As ideal customers, their love of premium export quality fruit dovetails perfectly with Chris’ desire to create the perfect cherry.

And he’s obviously coming close because last year he was adorning podiums with his award-winning presence, making him the cover boy of industry magazines and Australian Geographic, and the go-to guy for foodie shows.

First it was the 2019 National Carbon Cocky Award for Demonstrated Improvement in Carbon Management in Horticulture or Viticulture. Two months later, he was named 2019 NSW Farmer of the Year.

Both awards have been a fortifying step for the farmer from Wallendbeen who, armed with a horticulture degree, stepped off a well-beaten track to pursue an interest in regenerative agriculture at his orchard.

“I realised I had reached a ceiling in terms of quality and flavour using conventional horticultural practices to control everything in the pursuit of the perfect cherry,” he says.

Starting from scratch in 2005, Chris cleared a newly purchased 20-hectare block of aged orchard stock and replaced it with new trees. Underneath, ground cover crops were sown to bolster organic matter and support microbes in the soils.

He ceased using chemicals to control weeds and insects.

“I took the approach of working with Mother Nature instead of against her,” he says. “This is when I took our cherries to another level in terms of flavour, firmness and being 100 per cent nutrient rich.”

What sits there today could possibly be described as utopia above and below the soil, where an ideal balance below results in a perfectly balanced fruit.

‘Big, busty, rich and red’ is the key phrase with varieties such as Royal Tioga, Lynn and Hazel, and Chris’ favourite, the Samba, leading the charge in an industry where size matters.

The larger the fruit – 32mm to 34mm – the better, with firmness determining shelf life, and mahogany red the preferred colour.

“And all of them have to pass the taste test,” says Chris. “We’re really focused on taste.”

These cherries don’t necessarily appear on supermarket shelves in Australia, with 80 per cent of Chris’ fruit bound for Indonesia, Taiwan, China and Indonesia.

“The rest goes through the shopfront,” he says. “And pick-your-own, which we run during four weekends of the season as a unique opportunity for locals and visitors to see and experience premium export quality fruit.

“Really, not many people get to see that big sized fruit. The most common thing we hear is that it isn’t in shops in Australia.”

This visitor feedback is vital to the orchard’s operation.

“As we build up on the younger trees, we look at varieties that eat well and that’s where the face-to-face is good,” says Chris. “Cherries are a little like wine – with all the different flavours – so it’s good for sorting out what varieties are worth having.”

In a year that has delivered more rain than the Hilltops district has seen in years, Chris says that has been reflected in improved tree health, and the cherries are looking beefy.

“We get paid on size and firmness and this year size looks amazing,” he says. “Firmness is hard to tell until it’s picked, and flavour is tricky but it all seems really good on all fronts.”

The season for the Halls starts around 10-15 November and runs through to Christmas. It’s just a small segment of the 100-day Australian cherry crop that ends in Tasmania and Victoria in February.

But backed by an optical grader and an enthusiastic locally sourced workforce of uni students and post-HSC students, they’re ready to greet the hordes of visitors.

“We definitely have gone out on a limb and it’s taken years of hard work to get to this point,” says Chris. “But when you see those cars laden with our cherries – bought by the same families each year – heading back to the city, it’s a great sight.”