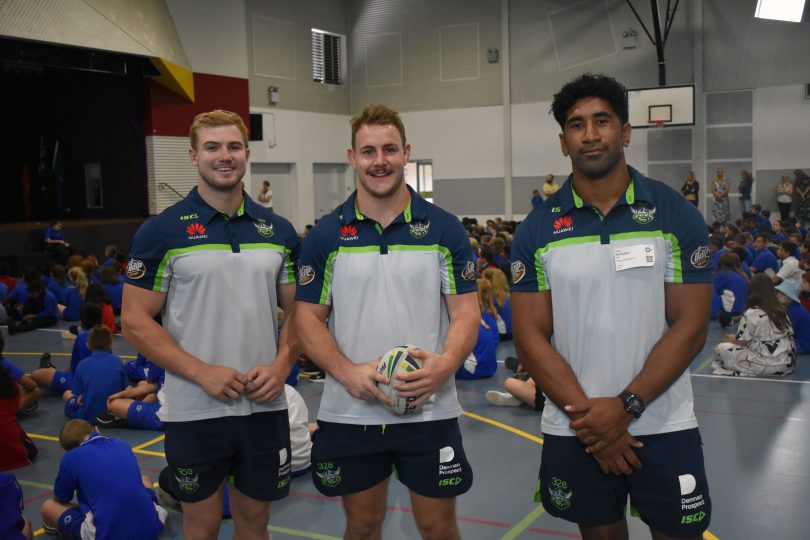 Following a disappointing NRL Nines campaign, the Raiders have seen some young talent start to shine through ahead of this season as they continue to keep the community in mind on and off the field.

While the young guns were over in Perth for the Nines competition, the rest of the Raiders squad were touring bushfire-affected areas on the South Coast last week, and launched the new NRL’s League Stars Inspire Program across 24 Canberran schools on Monday morning.

Current and former players stood in front of hundreds of students to focus on the importance of respect, resilience and health.

Former captain Alan Tongue, who played an integral part in developing the program, said NRL players have a special role to play in helping the younger generations who look up to them by practising what they preach.

“Rugby league has always had that ability to connect and inspire people and we see the remarkable efforts on the field, but these core values that we are trying to share in the schools are core values in rugby league clubs,” he said. 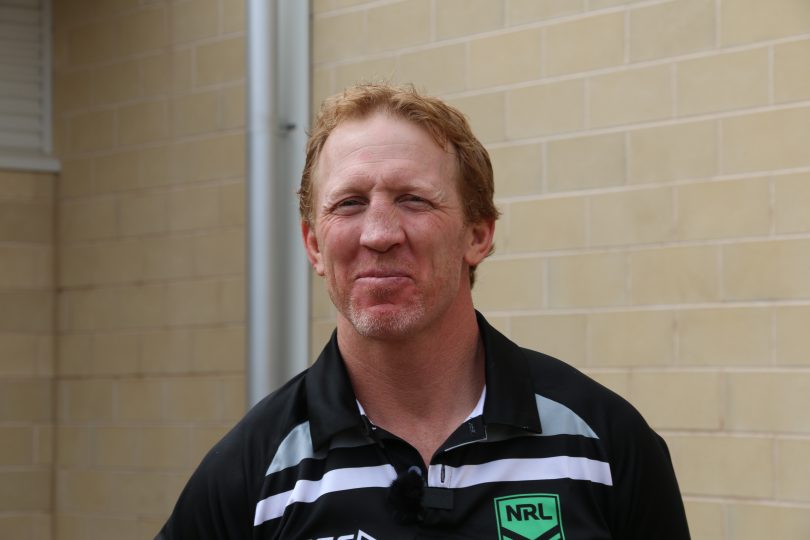 “I think it resonates really well with the players and their influence on the field, but also the way they connect and the smiles they bring to the students is an important part of combining the both of those.

“To me it is a little bit emotional to tell you the truth because that was a message from my Under 6s coach, to pass the way you want to receive it.

“Those messages have been with me almost my whole life, treating others how you want to be treated is used to be able to inspire.”

Prop Sia Soliola also remembers when players visited his primary school and the lessons they taught him, saying these lessons can have a life-long impact.

“It is always fun speaking with the kids, as we know they are the next generation and the messages that we spoke about have a ripple effect,” Soliola said.

“Jonah Lomu came to our school once and I remember that pretty vividly, how much joy that brought to the school, the energy just surrounds this stuff and the sport. Understanding what it means to the kids, it is nice that we can return the favour.

“The saying goes you practise what you preach. The messages come from a different angle, we probably connect in a different way than parents or teachers, so hopefully it makes their jobs a little easier.” 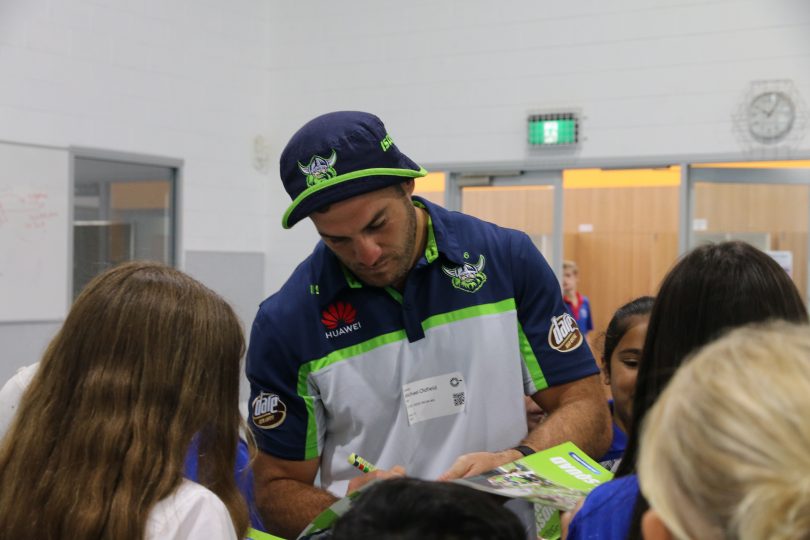 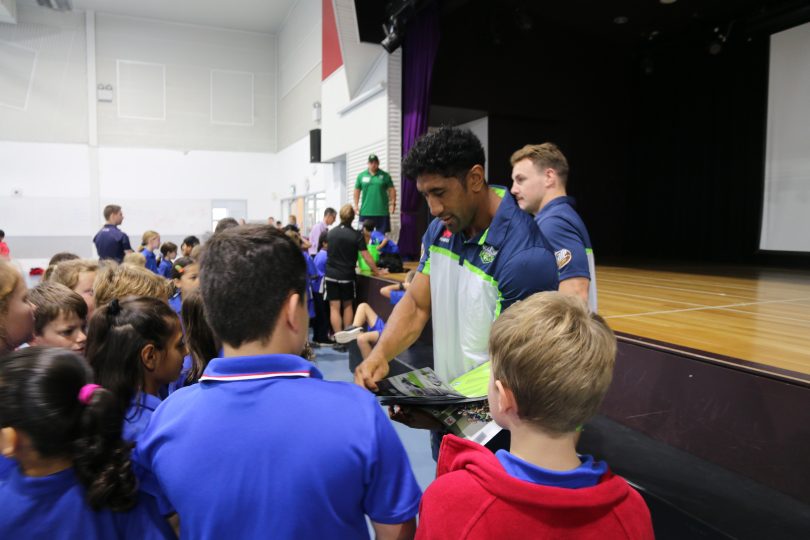 Soliola travelled with the NRL Nines team over the weekend and while the results were disappointing he is proud of the emerging squad and the Raiders’ development players.

“We got a gauge of some of the young stars coming through: Harley Smith-Shield, Matthew Timoko, Darby Medlyn. Kai O’Donnell was a nice surprise,” he said.

“A lot of them really stood up and for such an inexperienced team I was quite pleased with the guys.

“It was the whole experience, seeing and being amongst different clubs and different players, they would have got a huge kick out of it.

“Daine Spencer, he was a little ball of energy, you could not slow him down, he really enjoyed it. For those kinds of guys to run out and be in that environment, it would have been a really good boost.”

Members of the squad visited schools throughout the South Coast yesterday as part of our visit to the region. Thanks to the schools in Mogo for having us! ?? Good to see Raider no. 240 Michael Weyman too! #WeAreRaiders #NRL pic.twitter.com/SzN55MGDol

While Soliola was in Perth, the rest of the first-grade team were touring bushfire-affected towns in an effort to understand what the communities had been through.

“The boys would have got a big sense of what the fires would have been like helping with the bushfire relief,” Soliola said.

A huge thanks to Ricky Stuart and the @RaidersCanberra for hosting a training and signing session in Batemans Bay this morning. It was fantastic to see such big smiles on so many young faces! pic.twitter.com/JXN4UGOZcb

The club is selling the Nines’ jerseys to help raise money for their bushfire relief program. You can bid here.

Helping ACT - 12 seconds ago
Roseanne Howes I am proud of Slabsforheroes too. A history written by them couple of years ago. I am part of them.... View
Helping ACT - 5 minutes ago
Hi Jenny thank you. Let us keep helping. Humanity needs it. View
Jenny Mason - 59 minutes ago
Congratulations and many thanks for all your hard work, for many, many year, Mohammed Ali!... View
Opinion 7

Jeffrey Brown - 2 minutes ago
It's a great idea. It should definately apply to a situation where the Landlord does not honor the Lease Agreement through th... View
Natasha Van Oudheusden - 3 minutes ago
Often the landlords are just normal people trying to provide for their families. How are they supposed to afford it? View
Onelia Herriot - 9 minutes ago
If the landlord must pay moving costs then the timeframe to move out must be reduced. View
News 23

Aaron Nicoli - 3 minutes ago
It’s also so much safer now… 60km/h jam brakes on for the camera, accelerate back out to 60… It’s achieved nothing fo... View
Phil Hogan - 39 minutes ago
Got to pay for the tram 🙄 View
mark boast - 6 hours ago
Is a speed limit a “never exceed” or a permissible maximum plus/minus 10%? Cameras don’t image opinion. Time to move on... View
News 3

Arety Kr - 42 minutes ago
It wasn't that wet compared to last year. Come on, where did that extra 6 mill go to mowing?.... View
Property 6

One ‘fro to go, please: community advocates go short to fundraise for DVCS