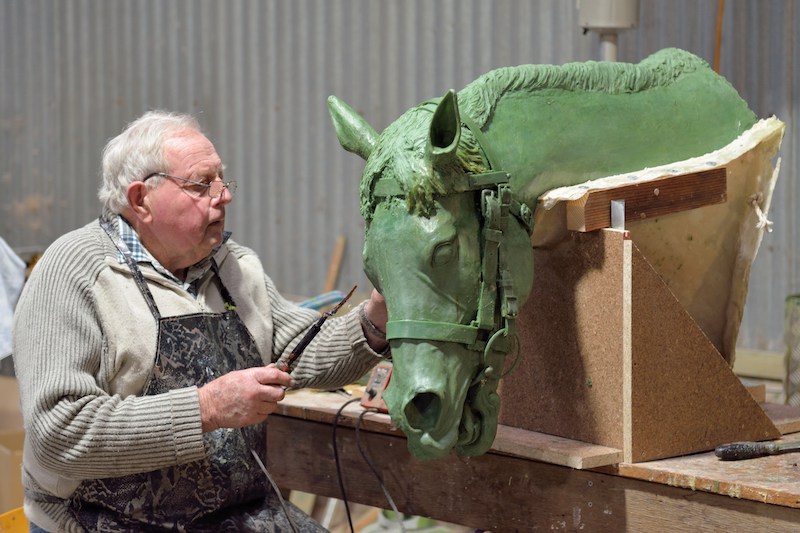 Earlier this month a small group of people from Harden-Murrumburrah set off in their cars and by train to Victoria for the running of the Jericho Cup. Their 1634-kilometre round trip to and from Warrnambool was quite a trek. Those on the train hired a car in Melbourne to complete their journey, while others made a holiday of it, taking a week.

Why? Because a legendary Australian war horse connects the two towns.

In Warrnambool, a race commemorates the horse.

In Murrumburrah, a life-sized bronzed statue will also pay tribute to ‘Bill the Bastard’, a 17.1 hands high waler.

The three-mile Jericho Cup celebrates Bill the Bastard winning a feature race at Jericho in 1917. That event was a ruse to allow Lieutenant General Harry Chauvel to amass some 34,000 soldiers and light horsemen. They were hidden in orange groves while a five-event race meeting took place in full view of the Turkish Army, watched by over 10,000 spectators. The main event was the Jericho Cup, which Bill the Bastard won.

The organisers of Warrnambool’s Jericho Cup have donated $25,000 for Murrumburrah’s sculpture which is nearing completion and will be on permanent display in the town, 130 km north-west of Canberra. A small committee, Bronze Bill the Bastard, set up to help immortalise Bill, has raised $790,000, including $36,000 from local sculptor Carl Valerius. 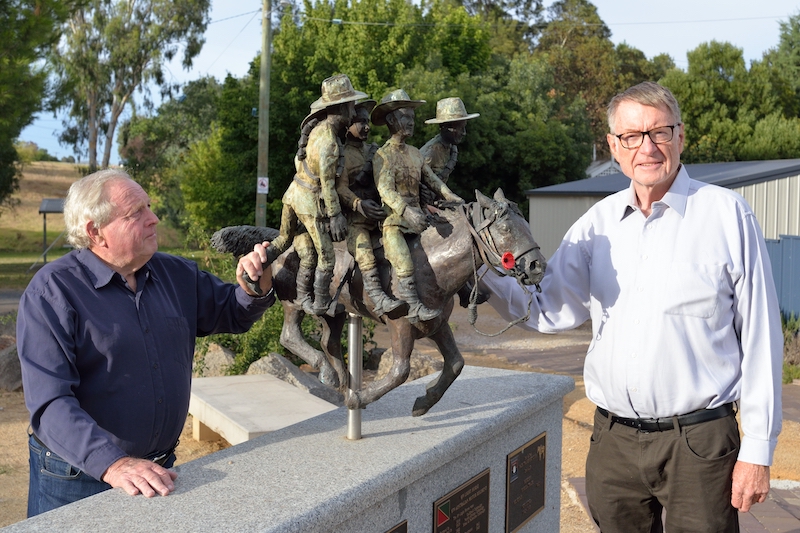 No stranger to re-creating famous Australians, Valerius, who previously made a life-size statue of Sir Donald Bradman, built the statue of Bill. The horse, which was handled en route to the Middle East by writer and poet Banjo Paterson was a huge, fierce, stubborn animal. He was so named because no one could ride him. He bucked everyone off, except Michael Shanahan. He became a legend after the Battle of Romani, where he carried Shanahan and four Tasmanian troopers across heavy sand, saving them from certain death on the battlefield.

Major General James Kenneth Mackay (1859-1935), soldier, author and member of the NSW parliament formed the first muster of the 1st Australian Horse in 1897 at Murrumburrah. His efforts are commemorated in a recent statue by Melbourne sculptor Louis Laumen, unveiled in Murrumburrah in August this year. After Federation, equivalent light horse units from around the colonies were amalgamated into the Australian Light Horse of which Mackay was in command.

Sydney’s fine arts foundry Crawford’s Casting is bronzing Bill the Bastard and the troopers he carried to safety in World War I. The statue is expected to be unveiled in 2020.

A Hilltops councillor, Chris Manchester will convene a meeting in January with the council and owner of the old Murrumburrah Mill, opposite the Light Horse Memorial, to discuss a permanent site for Bill the Bastard. If all parties agree, Mackay will appear as though he is looking at Bill across the road.

The former commercial hotel in Murrumburrah was re-named The Light Horse Hotel when the smaller ‘life-like’ model of Bill the Bastard was unveiled. A ‘Bill the Bastard Burger’ now features in the hotel’s bar and restaurant called ‘Shanahans’.

A detail-rich timeline and app are planned to highlight the story and strategy for the 1st Australian Horse and Bill the Bastard from 1897 to 2019.

chewy14 - 46 minutes ago
JS9, I disagree because preferences and wants are not met with housing almost always. I'd prefer to live in a mansion but I c... View
JS9 - 1 hour ago
I don't think its a reasonable assumption to think that a perfectly competitive market exists Chewy in the Canberra housing m... View
chewy14 - 4 hours ago
I really don't get how you say it's only about profit as if it's a bad thing. These units only get sold and profit made if th... View
News 27

Mike of Canberra - 13 hours ago
Over many years, the only consistency I've seen from the green-left is their apparent dislike of ordinary working people actu... View
News 6

steve2020 - 15 hours ago
The disrespect towards women had been encountered in many workplaces that I had worked in, in Canberra. The irony is that bec... View
jybrik - 22 hours ago
What a thoughtless, demeaning comment. "So, get over it" is a sentiment that we as a society should be fighting against, as i... View
Business 1

Nick Swain - 15 hours ago
Even in the hardest lock down time Green Square was the place to hang out - there was a strong sense of community. Many of us... View
Community 25

@The_RiotACT @The_RiotACT
The Canberra Day appeal asks us all to give where we live next week, to locals in real need. Among them are the clients at Meridian: here's why a vulnerable group needs your help https://t.co/uh9pWNYqE9 (51 minutes ago)

@The_RiotACT @The_RiotACT
Canberra has been discovered. Let's hope we can relish the opportunities and overcome the challenges that brings, says Ian Bushnell https://t.co/0Nbtm98Tn1 (5 hours ago)