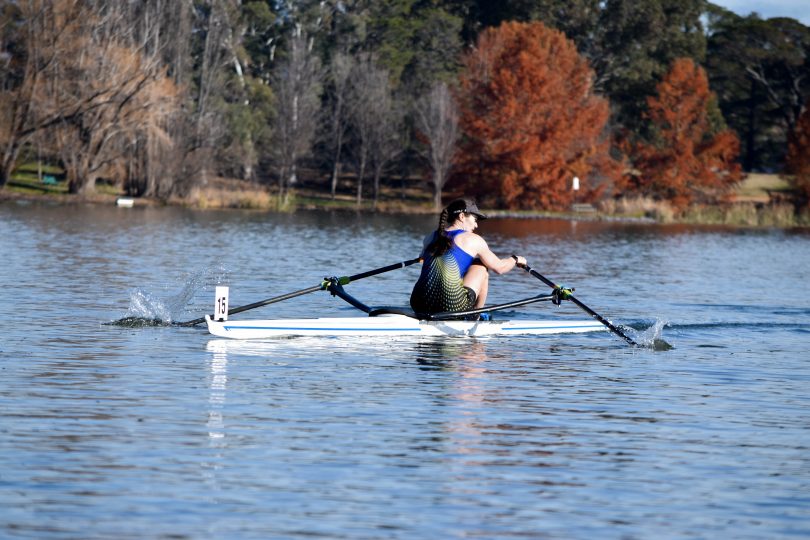 Almost 100 rowers headed out last weekend for the first Winter Time Trial of the season, where Canberra Rowing Club’s (CRC) Cara Grzeskowiak broke a 24-year-old record on Saturday, recording a time of 15:59.47.

In beating Adair Ferguson’s 1996 record of 16:09, Cara became the first female single sculler to complete the course in under 16 minutes. Next fastest across the line were ANU’s Anneke and Lilli Reardon in second and fourth, with Capital Lakes’ Madeline Vagg third. ANU’s Catherine Khan leads the handicap placings ahead of Madeline and Cara.

It was the first competitive rowing meet in the ACT since February.

The other notable performance came from CRC’s Cormac Hayes. Cormac set a junior record with his time of 15:22.38, the fourth-fastest around the course, behind only Black Mountain’s Luke Letcher, CRC’s Thomas Perry and Capital Lakes’ Harry Glackin. Cormac, Thomas, and Dermot Balaam made it a CRC top three on handicap placings. 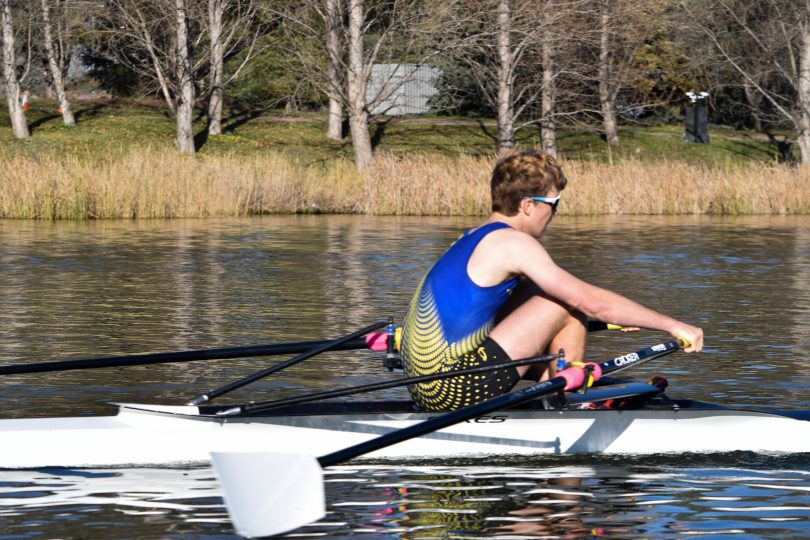 In the women’s pairs, sisters Harriet and Georgina Wallace (ANU & CGGS) set a slightly faster time than veterans Sarah Tynan and Dearne Grant (ANU), although the latter finished ahead once handicaps were applied.

Sunday racing saw Harriet and Georgina set the fastest women’s doubles time, while Cormac Hayes and Rafael Priest were the fastest overall. The quickest on handicap was the visiting Drummoyne pairing of Maggie Smith and Scott Bickford, while the fastest mixed double on handicap were Capital Lakes’ Mal Rimes and Kirsten Peterson.

In the women’s eights an ANU composite boat set the fastest time overall and on handicap, with the crew of Jordan Crooks, Jerushah Bull, Eloise Lambden, Teah Kneipp, Sarelle Woodward, Fiona Blackwell, Anna Cicognani, Elaine Bissaker and Sarah Davoren (cox) getting around ahead of the CRC composite.

The second Rowing ACT Winter Time Trial for 2020 is scheduled for the weekend of 15-16 August, with the final round of the abridged series on 12-13 September.

Mick Andrews - 1 minute ago
Honestly I love doing 85 on the parkway, il stick too it😆 View
Brindie - 2 hours ago
Given that our main roads are so congested (Tuggeranong Parkway; Adelaide Avenue) and that our public transport system is so... View
Ol L - 3 hours ago
Canberra. If the traffic gets bad just put in more traffic lights, that’ll work real good…..check out Hindmarsh Drive Phi... View
Opinion 193

Adam Scott - 1 minute ago
I regularly feel like the only one doing 40 in the 40 zones. Also do some drivers think that they use more petrol with their... View
Ali Light Alasady - 49 minutes ago
Tani Buist LEGIT HOW LONG HAVE WE BEEN COMPLAINING ABOUT THE IDIOTS ON THE ROADS View
Jon Rooks - 56 minutes ago
Kathleen Julia Gill. I see both. The problem with these online debates is people keep making blanket, patently nonfactual sta... View
Breaking 15

Monaro Panthers women set to create their own slice of history

@The_RiotACT @The_RiotACT
ChooseCBR data reveals that some businesses processed more than 500 vouchers in the 25 hours the scheme ran, and almost 40 per cent of the vouchers were claimed at stores like grocers https://t.co/vVrNddImTH (20 minutes ago)