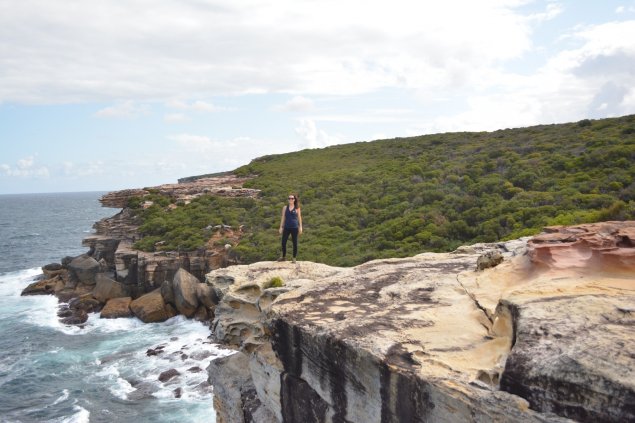 You’ve no doubt been to Sydney many times, but have you ever ventured out to the Royal National Park on the south eastern edge of Sydney?

The Royal National Park is only two and a half hours drive from Canberra along the Hume and Princes Highways.

The 16,000 hectare Royal National Park was established in 1879 and is one of the oldest national parks in the world.

My friend Rhys and I headed to Royal National Park to check out the popular Wedding Cake Rock, alternatively known as the White Cliffs of Marley. The name has come from the rock’s shape and smooth white surface.

To reach the start of the walk, head into Royal National Park and follow the signs to Bundeena.

There is a park access fee to enter the park of $12 per day per car.

You’ll find the closest parking area to access Wedding Cake Rock at the end of Beachcomber Avenue. There are a couple of formalised parking spaces here or you can park on the side of the road.

From the carpark, it’s a 3km mostly sand and rock trail to Wedding Cake Rock past cliff plateaus, spectacular sea views and through sandy scrub. 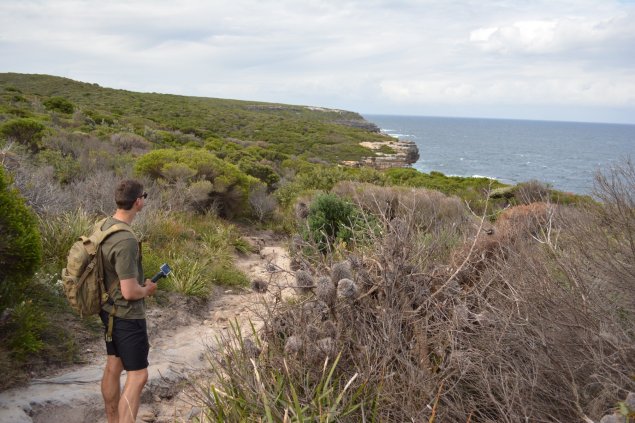 Most of the path is relatively flat with some short inclines and rock steps. If there’s been recent rain, there might be a few muddy or watery patches but there’s enough stepping stones or wooden planks to get through but an extra pair of socks wouldn’t go astray.

Don’t be misled by the sandy trail, thongs won’t be very effective on this trail and at least running shoes are recommended.

There is one section of the path that is quite steep as you head down rock steps. 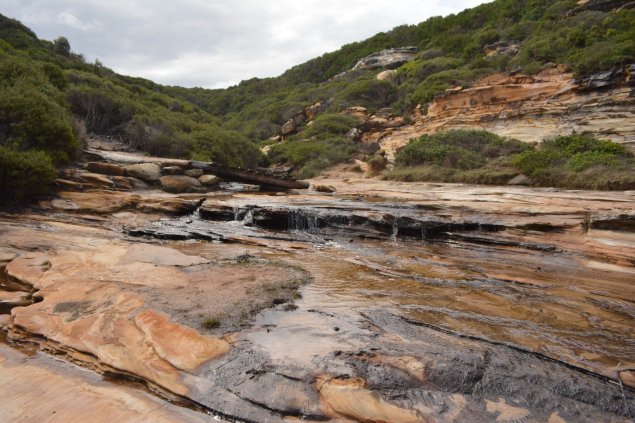 The path is quite exposed and on a hot day you’ll want sunscreen, a hat and a bottle of water.

It will take you around one hour to reach Wedding Cake Rock. Due to the current instability of the rock, fencing was erected across the top of the rock earlier this year. When I looked into this, I discovered it’s likely the rock may collapse within the next 10 years and there is talk about a viewing platform being built to view the rock. Make sure you enjoy it while you still can! 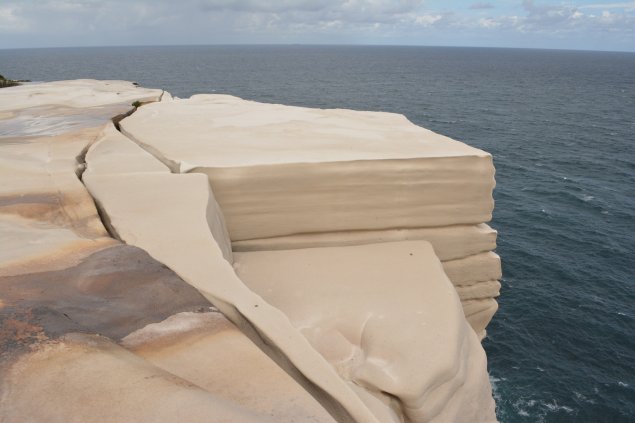 Despite the fencing, the wedding cake formation of the rock can still be seen from the side and it’s an enjoyable walk to the rock.

Allow time to take in the colourful wind and water weathered rock faces and the views of the coastal cliffs. 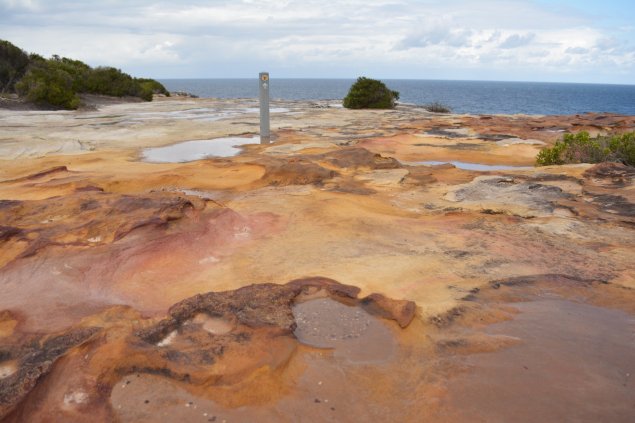 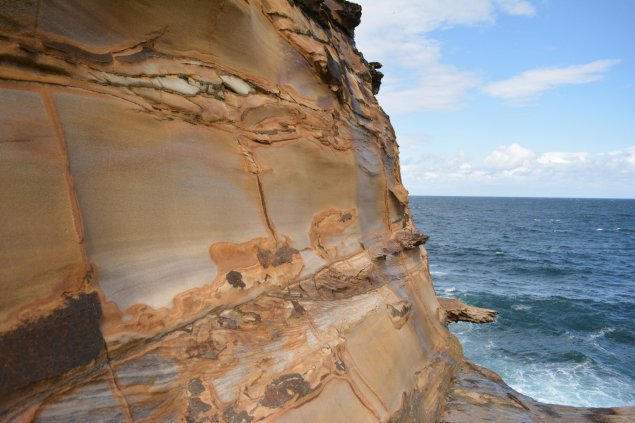 There’s plenty of other walks within the Royal National Park including the 6.5km Bundeena Drive to Marley walk that ends at Little Marley Beach, or if you want to combine camping with a walk, you can try the 26km Coast track from Bundeena to Otford or try to do it in a single day with an early start.

Despite being a National Park, the area actually has residential neighbourhoods within and there’s a range of services available such as supermarkets, cafes and petrol stations.

Set aside at least a day to enjoy some of what the Royal National Park has to offer. In addition to bushwalking, there are also fishing and bird watching opportunities. There are also picnic and barbecue facilities and campgrounds. 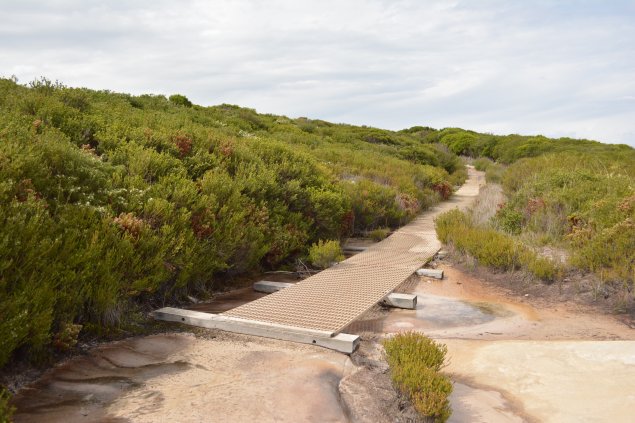 Wow this is awesome! Great photos. I would love to go after reading this x

Second National Park in the World after Yellowstone.

Ahhh happy memories of leaping off the top of the Wattamolla waterfall into the lagoon!

Do it these days and you’ll kill someone, the crowds in the lagoon on a weekend or public holiday are unbelievable.

HiddenDragon - 58 minutes ago
This is petty-minded vandalism of the national heritage. If the recent federal Budget had proclaimed that fiscal repair was t... View
Ol L - 3 hours ago
Can a government department go bankrupt? View
News 52

MERC600 - 2 hours ago
Quangers has it all over Canberra these days. No graffiti , grass mowed and no rubbish floating about. The other article on t... View
Sarah Winders - 3 hours ago
Lorraine Neville what do you all call it? View
News 19

Nick Swain - 4 hours ago
The Melbourne and Sydney buildings are very special. They were the first shops in Civic and are beautifully designed giving t... View
ChrisinTurner - 5 hours ago
Imagine the improvements that could be made if the government gave up spending $billions on replacing a few buses with trams.... View
show more show less
*Results are based on activity within last 7 days

A line of thunderstorms stretching from Parkes to the Victorian border will impact the ACT and surrounding regions during the...
Community 43

When did the word 'consultation' become the beginning and end of a genuine voice from the community on major policy...
Community 43

Canberra Day Trips: Walk in the footsteps of the Brinja-Yuin people on The Bingi Dreaming Track

@The_RiotACT @The_RiotACT
Critics say a 10-year funding crisis is coming to a head at the National Archives. An open letter to the Prime Minister pleads for help to save irreplaceable national assets https://t.co/IOZh6De8k4 (43 minutes ago)