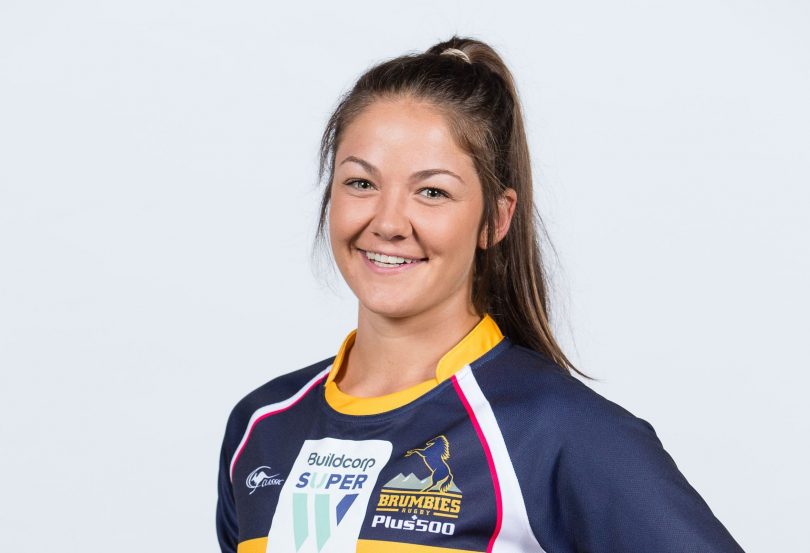 Michaela Leonard only became involved in the Brumbies set-up after her teammates suggested she play in the Sevens tournament last year. Photo: Supplied by Brumbies Rugby.

Imagine playing basketball all your life and having only a season of rugby league under your belt, but on Saturday afternoon you will run out on to Canberra Stadium in the Brumbies jersey to play your first match of Super W rugby.

For Michaela Leonard, that scenario is actually a reality.

After months of hard work, Michaela Leonard will run out with her Brumbies teammates on to Canberra Stadium against the Queensland Reds for their first Super W match.

“It is a pretty crazy feeling just thinking about putting the jersey on for the first time and getting out there and having people watching it and having it on TV. It is going to be pretty crazy and really exciting as well,” Leonard said.

“It is pretty exciting being one of the first ones in the first game. Coming into trial games we have started pulling things together and the past few weeks training has been getting better so it will be good to be out there for our first game, and seeing how we all work together and hopefully, we put on a good show.”

The Canberra side is not too worried about results and table places, with the inaugural Super W season aiming to promote women’s rugby and celebrate the amazing talent that exists in Australia.

The Super W season will be a round-robin competition with teams from Canberra, Melbourne, Sydney, Brisbane and Perth.

As part of a new era for women’s rugby across the globe, the game, which is being played before the Brumbies Super Rugby game against the Sharks, will see the Brumbies Women pitted against a strong Queensland side which impressed many on their way to a win at the Brisbane Global Rugby Tens.

Having played basketball for most of her life, Leonard is fairly inexperienced to rugby union and has experienced a big learning curve, but she believes her fresh look at it all and a bit of a hard drive will help the Brumbies on Saturday afternoon.

Playing at lock, Leonard only became involved in the Brumbies set-up after her teammates suggested she play in the Sevens tournament last year.

“Last year I played league with a lot of the girls who previously played Brumbies, and when Sevens came around last year with the Brumbies, they sort of roped me in to come give it a try. So I went through that and I really enjoyed it. And then 15s came around so I decided to give that a try as well.”

Learning union’s confusing rules has been Leonard’s biggest test ahead of her first game.

“It has been a bit of a struggle. It is something I learn each training and it’s really good having some of our more experienced Wallaroos girls there as well, particularly having a few that play the same position as me and being able to help me through and giving me that a little bit of extra insight into it.”

The Brumbies have a special ticket offer for Super W this Saturday, 17 March where between 4.50-5.20 pm you can purchase a ticket at the door for just $5.

Memberships are available here and tickets for individual games can be purchased at Ticketek.

Interesting that despite (rightly) promoting this women’s game, Canberra can’t be bothered putting on a free bus service.

John Hutchison - 16 minutes ago
Not correct. Labor are saying Zero net emissions. This means that emissions are possible, but only if offset by some form of... View
Paul Mathews - 2 hours ago
firts improve the stoopid pick-up parking...10 mins....out in the cold...jeez View
Eliza Doering - 8 hours ago
Free flights between London and Canberra 😭 Rae Coomber-Williams View
News 64

Brian Woodbridge - 41 minutes ago
I live in hope. View
Paul Mills - 3 hours ago
Too many medium density developments with zero design merit. Welcome to Northbourne canyon. View
Lynne Staunton - 5 hours ago
Julie Arnold but at least when the next big fire comes through that way there us now a decent fire break to protect the inner... View
Opinion 83

Lucas Pesian - 4 hours ago
Rest In Eternal Peace Chief. View
Becc Rohrlach - 4 hours ago
RIP....you were such a wonderful man....thoughts and prayers with David, Kellie and all your family xo View
Property 1

Brindie - 4 hours ago
This is yet another planning failure of the ACT Government. A site designed for 44 units will now have 149 apartments. The de... View
Business 2

Tony Holliday - 5 hours ago
Scott Holliday yes, I saw that earlier this year. Quite remarkable. View
Gerard Dwyer - 16 hours ago
Gail Neuss I would love to visit your area soon. I have another areas in Shannons flat I want to get to soon as well. View
News 1

Rauny Worm - 8 hours ago
Yes we can View
News 5

Opposition leader Alistair Coe has asked Canberrans to have higher expectations ahead of this year’s election following the Government’s budget...
News 30

@The_RiotACT @The_RiotACT
The planning authority has rejected claims that it is a toothless body unwilling to fight for its decisions in the courts, defending its deal with Zapari that will see the company's controversial Coombs development proceed. Check out what changed https://t.co/16ycDV9SUb (2 hours ago)