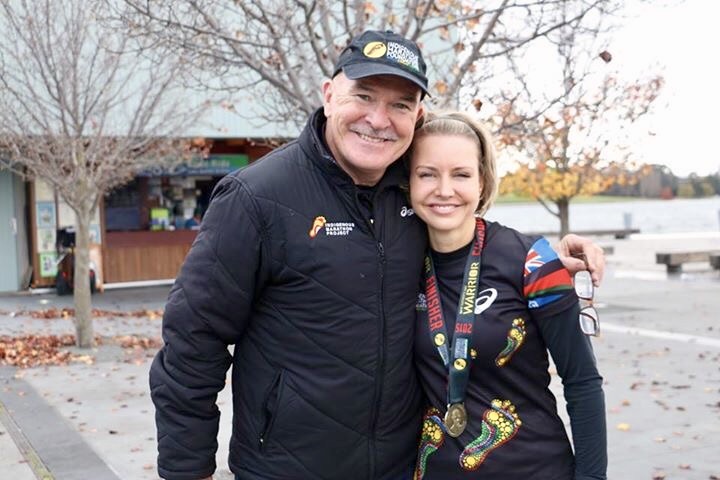 One of Canberra’s most prominent and successful businesswomen will take on the New York City Marathon on 5 November in support of world champion marathon runner, Rob de Castella’s Indigenous running program.

Founder and director of ‘Clear Complexions’, Suzie Hoitink and her team have been pounding the pavement to raise funds for, and awareness of the Indigenous Marathon Foundation (IMF), a health promotion charity de Castella established in 2009.

The IMF umbrellas four key programs and one of those is the Indigenous Marathon Project (IMP), for which Suzie is the 2017 Corporate Ambassador.

Suzie’s team joined the thousands of entrants in Sydney’s City to Surf race in August and now she is preparing for her New York run.

Known by many within the industry as The Skin Expert, Suzie is passionate about overall health, and has run triathlons alongside her husband Alex, and two daughters.

The Sydney City to Surf preparation was the third of four IMP camps. A team of Clear Complexions employees led by Suzie, joined the IMP team to promote its message and encourage others to support the life-changing Foundation.

Suzie is paying her own way to the New York City Marathon but she is seeking donations from the public to help her raise $50,000, which is the equivalent cost of sending one IMF squad to New York.

Through the IMP, each year a group of 12 young Indigenous Australian (six men and six women) aged 18 to 30, from regional, remote and city Indigenous communities nation-wide aim to conquer the New York City Marathon with just six months of training. Most have no, or very little, running experience.

Education is a compulsory component of the IMP and all squad members are required to complete a Certificate IV in Sport and Recreation, CPR, sports first-aid training, and media training to be eligible for final qualification to run in New York. These qualifications provide the skills, knowledge, and experience to enable the runners to return to their communities as IMP graduates to drive change and continue the IMP ripple effect across the country.

At the beginning of 2017, the IMP had 65 Graduates (‘FrontRunners’) who have finished an international marathon and now are beacons of inspiration for their families, communities and the nation.

The New York City Marathon is iconic for being the most challenging marathon in the world, which is why the IMP specifically focuses on the event – to push these Indigenous Australians outside their comfort zone to achieve beyond their imagination.

Donations can be made at https://footprints.gofundraise.com.au/page/runsuzierun

Christopher Cuba Rabanal - 7 minutes ago
How about a six day week with every Sunday shut. Where everything is closed in a Sunday Sunday is family Day ?... View
Valerie Foster - 3 hours ago
Been talking about that for years. View
Property 18

Sue Guo - 10 minutes ago
Lachlan Johnstone Hmmmm, so what’s the definition of a “fallen hammer” from an auction? If a fallen hammer doesn’t co... View
News 125

Sue Sutton - 26 minutes ago
What about Forrest? Surely the median is higher than Griffith etc. Maybe there are not enough properties sold🤔... View
Alex Troy Elsworth Adkins - 1 hour ago
Mat Kenna but Griffith, Red Hill, Yarralumla etc... weren't until now? Yeah right... View
Mat Kenna - 1 hour ago
Alex Troy Elsworth Adkins it's the new additions, Forrest has been in the list for about 10 years. View
News 9

Colin Ball - 29 minutes ago
Why do they get game consoles?it's meant to be a place for punishment not reward, what about the people who have worked hard,... View
Steve Whan - 2 hours ago
Just curious, do instigators of damage have their terms effected due to vandalism caused? I dont know. Just curious. View
Inca Serrated - 3 hours ago
Not a single mention of the conditions that prisoners are living in... Lockdowns, no family contact for over a year, no meani... View
Community 37

Deb Batt - 1 hour ago
Wonderful View
Dee Kaden - 2 hours ago
What about men that are homeless??? Anything similar for them? View
Mark Heinrich - 3 hours ago
These things are not either or. There’s a need for multiple solutions to multiple problems. Don’t knock something just be... View
Lifestyle 14

@The_RiotACT @The_RiotACT
'She's on the Bill' is the brainchild of local musician Sophie Edwards and is designed to give female and gender non-conforming artists opportunities in the music industry https://t.co/K00fNGvshk (54 minutes ago)