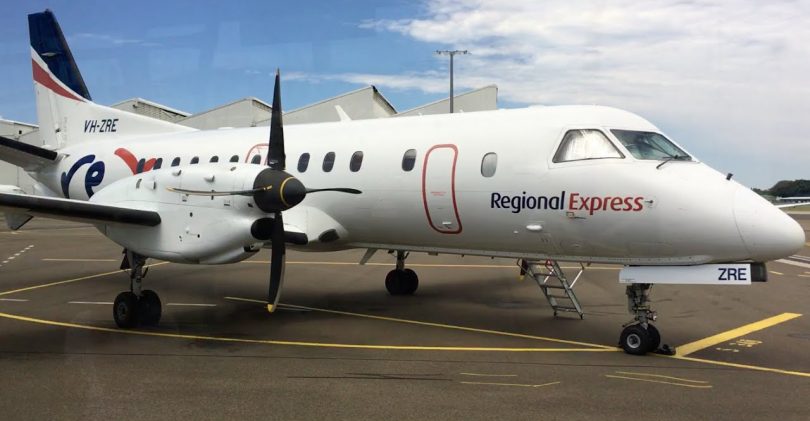 The region’s airline has rejected safety concerns describing such claims as baseless, cowardly and malicious, and accused the industry’s regulator of leaks to the media.

Regional Express (Rex) connects Merimbula, Moruya and Cooma airports with Sydney and Melbourne on a daily basis. Nine News yesterday aired suggestions that these communities and 57 other destinations around Australia were at risk.

According to Nine News, a 17-page report by Rex maintenance crew and engineers suggests a culture of bullying and intimidation and of staff being “too scared to speak up about defects”.

Nine reports that in April this year an engineer was stood down after flagging a “potentially catastrophic defect in a propeller” in a Saab 340 that flies between Wagga Wagga and Sydney.

The “rusting” part was reportedly replaced, “six days later the engineer was stripped of his accreditation and suspended” according to Nine.

The Aircraft Owners and Pilots Association of Australia has suggested the airline should be grounded.

In a media statement posted to their website, Rex has discredited reporting of the issue by the Sunday Telegraph and Nine News.

“Responding to reports from the tabloids that cited anonymous sources accusing Rex of having a poor safety culture, Regional Express confirms that the same wild accusations have been raised by a disgruntled engineer and his union, first to the Fair Work Commission and then to the Civil Aviation Safety Authority (CASA),” the media statement reads.

The airlines Chief Operating Officer Neville Howell says, “Realising that these baseless accusations are not getting any traction, some are now taking the despicable and cowardly approach of launching anonymous malicious attacks on Rex in the press.”

“Rex has been advised by the Australian Licenced Aircraft Engineers’ Association that it is CASA (Civil Aviation Saftey Authority) that is behind the anonymous leaks.

“Rex had already invited senior management of CASA on 18 June 2019 to have a full briefing on the matter as well as to discuss the professional failings of the disgruntled engineer.”

“We believe that our safety culture is second to none. Rex is proud of its Safety Management System.”

Regional Express is Australia’s largest independent regional airline operating a fleet of more than 50 Saab 340 aircraft on some 1,500 weekly flights to 60 destinations throughout all states in Australia.

Mr Howell says that CASA wrote to the airline in late May saying it had “no current safety concerns with Rex. CASA is satisfied that Rex is currently meeting all its obligations.”

Rex says it will not be making any further comments on the matter.

“We will leave it to the safety authority to judge if our safety culture is lacking in any manner,” Mr Howell says.

Speaking to Region Media, Peter Gibson from CASA says the watchdog is investigating the matter thoroughly.

“We haven’t made any findings at this point and we will do that as quickly as possible,” Mr Gibson says.

Mr Gibson was surprised at the suggestion by Rex that CASA might have leaked the report to the media.

“I think it is pretty obvious from the story in The Sunday Telegraph that the pilots’ union supplied the information,” Mr Gibson says.

Kellie Yarrow - 3 minutes ago
We’ve seen some in Queanbeyan on our regular walks. View
AZ Hukic - 19 minutes ago
we have been doing this last few days. My daughter is painting them and we scatter them on our walks around Theodore View
Raeline George - 25 minutes ago
Christine Stapleton perfect pens for the job! https://www.kaszazz.com/cart/default.aspx?ConsID=101594&code=7898... View
Business 22

Warren Curry - 18 minutes ago
Damien Benney Politicians with conservative policies that treat health care as a business proposition. View
Matt Perry - 1 hour ago
Is it a plan to get the the whole state as public servants ? View
Alexei Gorbatov - 2 hours ago
Why we don’t hear that money go to strengthen our hospitals? View
Motoring 2

James Forge - 18 minutes ago
“Might not be anything special” At least it is low and sleek like cars should be.... View
Ed N Joanne Towner - 2 hours ago
Had one of these and it was an excellent vehicle and great to drive. View
News 13

Lottie Maree - 37 minutes ago
I’m in my early 30s and have been told my age is already a barrier in accessing employment. From mid 20s onwards it’s bee... View
Stephen Ellis - 1 hour ago
Craig Butler that’s a huge positive. Shows how people like Damien and me can recall the good times and forgive recent poor... View
Maya123 - 1 hour ago
I've been discriminated against because of age. After being laid off with many others, mostly older workers - I was 51, I app... View
Lifestyle 1

Acton - 2 hours ago
Meanwhile the Greens, once an environmental party and elected on the basis of its false claims to protect Canberra's environm... View
Food & Wine 12

@The_RiotACT @The_RiotACT
The AIS Fitness Centre will not be reopening come the end of COVID-19 restrictions, leaving 200 members annoyed that they weren't consulted over the change https://t.co/SwfCpZJz7z (21 minutes ago)