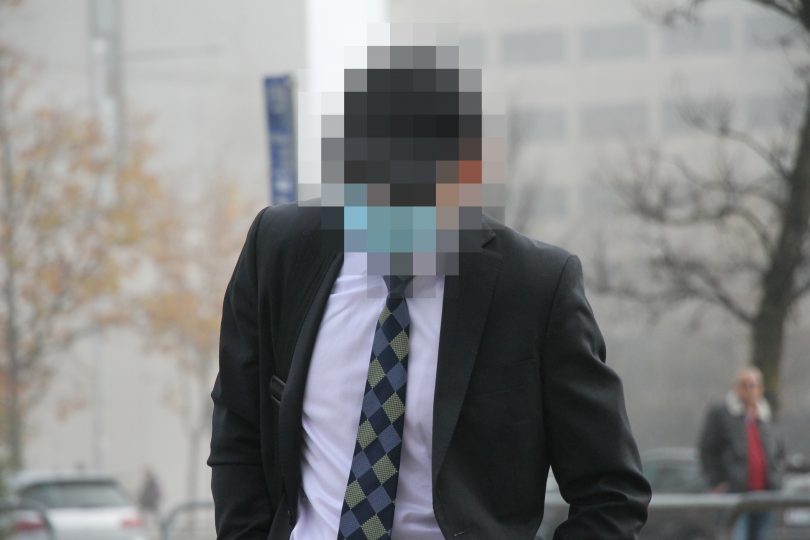 The former public servant entering court on Tuesday (25 May). He will fight to prevent the publication of his name in the Court of Appeal. Photo: Albert McKnight.

A former senior Commonwealth official who searched online for terms like “family nudes” will fight to keep his name and identity secret after he was sentenced for possessing child abuse material.

The man pleaded guilty and was sentenced in the ACT Supreme Court on Tuesday (25 May), but while Chief Justice Helen Murrell decided to lift a non-publication order on his name, his barrister, John Purnell SC, immediately informed the court his client would be appealing her decision.

A suppression order was made about 12 months ago after the man was arrested, preventing the release of his name. As part of the new order, news outlets are legally unable to publish the reasoning behind either decision.

Facts previously tendered to the court show on 29 April 2020, the man attached two cartoon images of child abuse material and attempted to email them to a woman in the United Kingdom.

His email address was suspended shortly after he attached the images.

On 20 May 2020, police searched his home and seized his Apple MacBook Pro laptop, finding the two images.

In court, Chief Justice Murrell said while the images were computer-generated, they had a “natural appearance”.

She added that while the cartoons did not directly involve victims, they could fuel interest in the subject matter so they were “far from harmless”.

She said the man had exchanged images of sexual fantasies with the woman in the UK for his “sexual gratification”, but generally, they did not involve children.

She also said he had downloaded images of children when searching for other material.

However, she said a clinical psychologist determined the man had tried to “soothe” feelings that arose from his mental health issues by impulsively using pornography and “was not a paedophile”.

The psychologist also found there was a clear link between the man’s mental health and his offending.

The man pleaded guilty to a count of possessing child abuse material and faced a maximum of 15 years in jail.

But he escaped a jail term after Chief Justice Murrell sentenced him to a recognizance release order worth $100 and said he was to remain of good behaviour for two years.

He has spent one night in custody for the offence.

The court heard lengthy discussions over removing the non-publication order on the man’s name, starting on Monday (24 May) before continuing on Tuesday.

Chief Justice Murrell ultimately ruled to remove the order seven days after the sentencing, but Mr Purnell said her decision would be appealed, which meant she had to continue the order.

She said the notice for appeal would be filed in seven days and the case would appear before the Court of Appeal at its next sitting date in August.