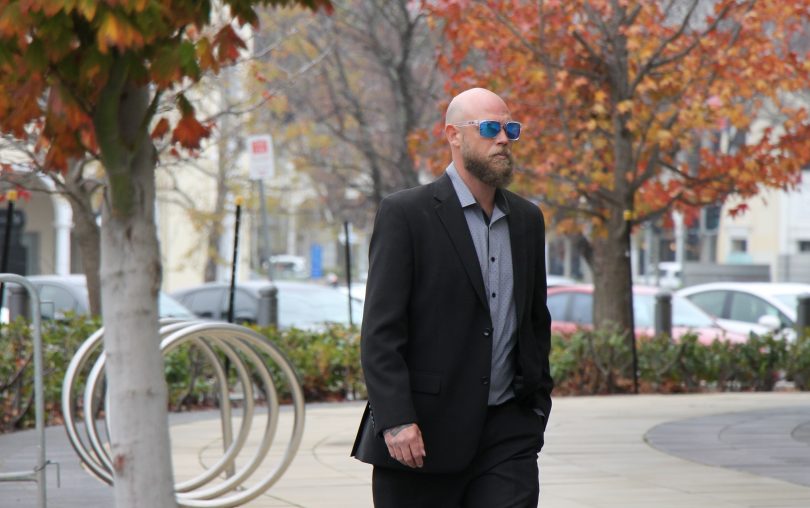 The first two Canberra grandparents knew of intruders at their door was when they heard a window being smashed and their granddaughter started screaming.

What was supposed to be a peaceful night watching football for the innocent family ended with one of them shot in the chest with the blast of a 12-gauge shotgun.

On the night of 30 May 2020, Denis accidentally knocked on the victims’ door in suburban Belconnen when looking for her friend’s house.

“Oh, sorry, wrong house,” she said after the couple’s eight-year-old granddaughter answered the door. She then went and laid down on the road outside their home.

Worried she could be hit by a car, the couple asked if she was okay, to which she replied, “f–k off”.

Concerned a car would arrive soon, the grandfather picked her up and put her on the footpath – an act of kindness that enraged her. She struck him in the face and yelled obscenities as the couple left, including “go back to your own country”.

Denis called Hallam and told him she “had been bashed by five black guys”, so he told his best friend Paul Fredrickson, now 35, he was going to find out what was happening and asked him to come to help.

Less than an hour later, Hallam and Fredrickson approached the grandparents’ home, armed with a shortened 12-gauge pump-action shotgun and a blue baseball bat, respectively.

The granddaughter was sitting metres away from the front door when Fredrickson smashed an adjacent glass window using the bat and the girl started screaming.

As she and her grandmother fled to a neighbours’ house, her grandfather grabbed the bat and struggled to yank it away from Fredrickson before the home invader pulled it free and turned to flee.

But Hallam fired towards the door, striking the grandfather in the left side of his chest with what was later found to be 20 pieces of shotgun pellets.

The grandfather’s teenage son helped him with the bleeding until paramedics arrived.

Fredrickson and Denis pleaded guilty to all charges laid against them over the incident when they appeared in the ACT Magistrates Court, with the former jailed for at least 10 months and the latter given an 18-month good behaviour order.

Hallam pleaded guilty to five charges, including discharging a firearm at a building and recklessly inflicting grievous bodily harm before he appeared in the ACT Supreme Court on Wednesday (19 May) for his sentencing hearing.

Prosecutor Shaz Naidu read victim impact statements by the grandfather and his wife to the court, which detailed the impact the assault had on their lives.

The grandfather said the shotgun pellets were unable to be removed from his body.

“I have to live with the results of this incident for the rest of my life,” he said.

His wife said she had been watching football in their kitchen when she heard smashing and her granddaughter began to scream.

“I was thinking, you only see these things on television,” she said.

She said the attack had taken a “lasting toll” on her family, including her granddaughter and husband.

“My husband is a quiet, gentle man and it has changed him greatly,” she said.

Hallam, a bricklayer from Charnwood, took the stand and began to cry when apologising to his victims.

“Words cannot explain how very sorry I am that this happened,” he said.

“It’ll probably stay with them for life.”

Under questioning from his barrister, John Purnell SC, he said he raised the shotgun in the air to fire it, but it didn’t go off so he pulled it down and played with its mechanism. It misfired when it was under his chest height.

He said he had used the gun to hunt rabbits for 10 years and “it never played up on me like that”.

When Mr Purnell asked why he had tried to fire the gun into the air, Hallam said it was to see who was inside the house.

“I was led to believe there were people in the house who had harassed my partner,” he said.

He said Denis had told him she had been beaten up by two or three “black Nigerian men” and was afraid for her safety.

Hallam said he wasn’t looking at where his gun was pointed when it fired, and afterwards, he just saw Fredrickson running away yelling, “run, run, run”.

Ms Naidu brought up that he had told a psychologist he was not worried about going to the Alexander Maconochie Centre and had described it as being “like a high school reunion”.

“Yes, I did say that because there’s a lot of people who I haven’t seen for a lot of years,” he said.

Justice John Burns said he would hand down his sentence on 18 June and continued Hallam’s bail.

He had bail whilst being charged with this offence?

Am from the bush and no one used a shotgun to hunt rabbits. Lead pellets don’t have the greatest of tastes. And a sawn off shotgun ?? .
Give us a break.

So he smashes somebody’s front window, points a gun into their house, fires, shooting the homeowner, and he gets 10 months?
How the effing f does that work? Should be 10 years.