Sharp focus on the blur of war 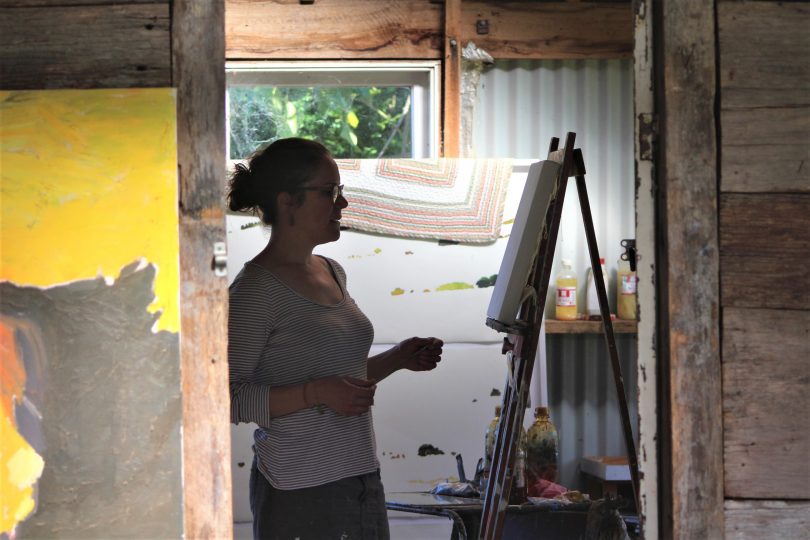 Perpetual, as Trustee, and the S.H. Ervin Gallery announced artist Kate Stevens as the winner one hundred and thirty years after Evelyn Chapman’s birth. 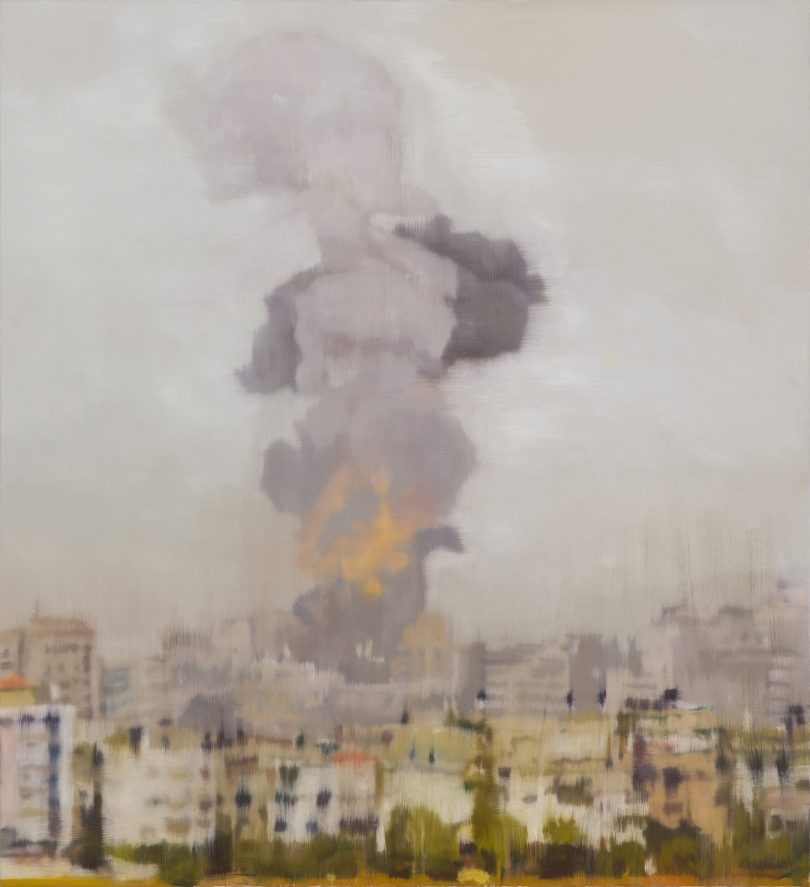 Stevens’ winning work Gaza forms part of an ongoing series exploring how we process images of war from the domesticity of the home which the artist looks to develop using the scholarship.

Stevens says, “I felt inspired to enter this prize upon seeing the beautiful black and white photograph of Evelyn Chapman sitting at her easel painting the ruins of the Western Front – a pioneer for women interested in the subject of war, not afforded the opportunity we have today to combine painting and motherhood.”

Alongside these artworks inspired by Youtube and Instagram, Stevens continues to paint watercolours of the landscape around Braidwood. These quite minimal and bucolic works are a far cry from the annihilation shown in her war paintings. The artist sees this, however, as the point. From such peaceful, safe landscapes, we can still be confronted by media images of war, so they do coexist. 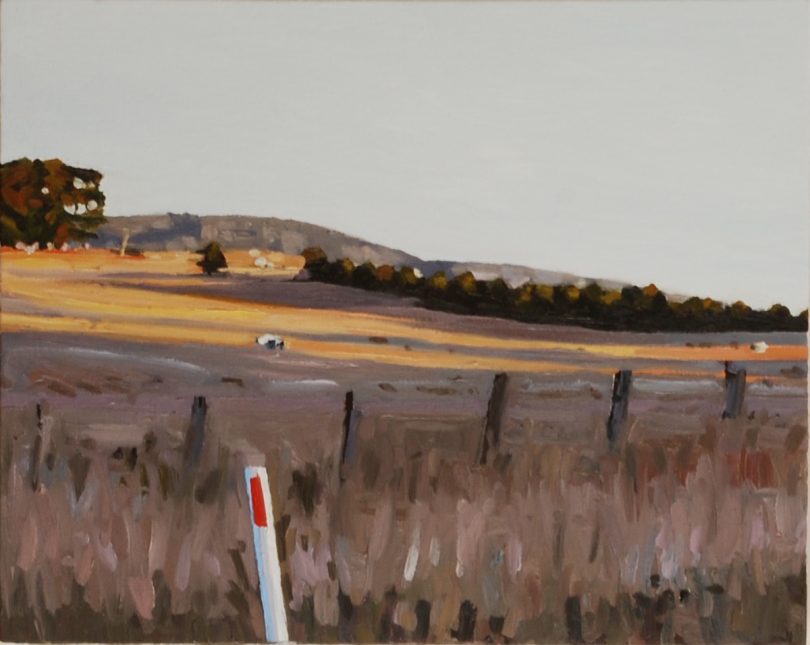 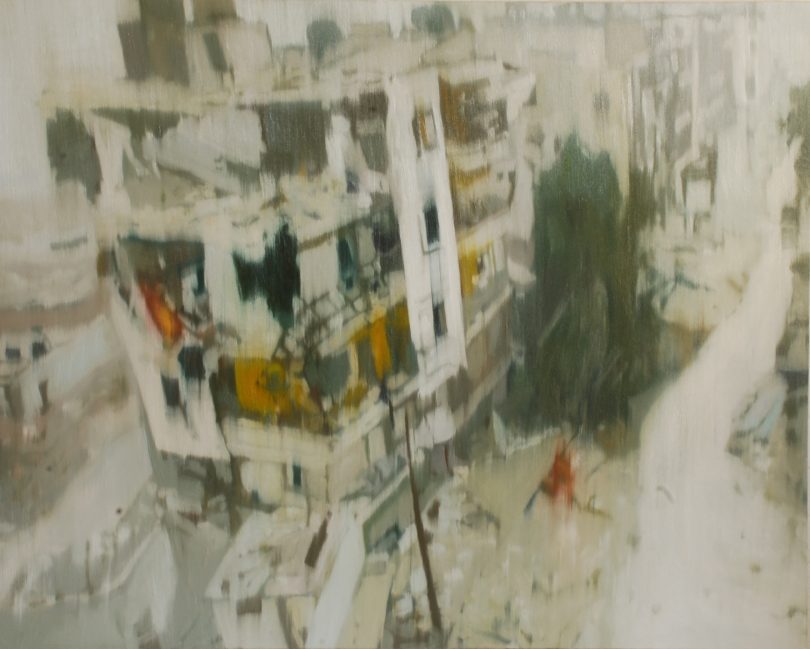 “I am interested in how we process images of war from the domesticity of home, and through the immediacy and relentlessness of online platforms. Over the past 18 months, I’ve been painting images of the ruins of Aleppo taken from drone footage on Youtube, and a series of explosions in Gaza painted from news photos on my mobile phone.”

The series Drones Over Aleppo is currently being exhibited at Canberra Contemporary Art Space. In the accompanying catalogue essay David Broker, director of CCAS, wrote: “What Stevens is presenting is not new, however, her work is a chilling reminder that the annihilation of previous conflicts is scarcely a thing of the past.” He concludes: “As we the audience are confronted with a highly accomplished poetry of destruction we can but ask what has been achieved, and for whom…and retreat to consider both the power and powerlessness.”

Stevens says she will build upon this series of work with research at the Australian War Memorial in Canberra.

“In particular I hope to use the publicly available resources at the AWM to gain a better understanding of Australia’s involvement in the war in Afghanistan, and other recent experiences of Australians at war. In addition, I want to learn more about the rich history of war artists through the Australian War Memorial’s collection, including Arthur Streeton’s sketchbooks and his watercolours of ruins.”

“By immersing myself in learning about the Australian experience of war today, and the works of Australian war artists, I hope to bring a deeper understanding and contemporary relevance to a new series of paintings on the subject,” says Stevens. 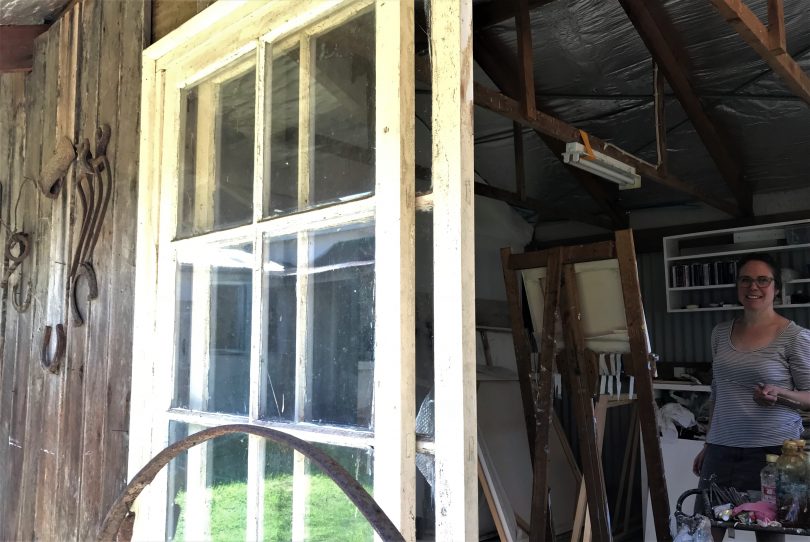 Kate Stevens in the studio in Braidwood. Photo: Alex Rea.

“It is a great privilege to receive this award and I look forward to using this opportunity to immerse myself in learning about Australia and war today, and the works of Australian war artists, so that I can bring a deeper understanding to a new series of paintings on the subject.”

Kate Stevens is a graduate of the Canberra School of Art ANU, and a winner of the Portia Geach Memorial Painting Prize, 2011, and was the recipient of a Veolia Creative Arts Scholarship in 2017.

The winning work will be on exhibit at the S.H Ervin Gallery, Sydney until Sunday 2 December.

Her exhibition Drones over Aleppo is on show at Canberra Contemporary Art Space, Gorman House, Canberra, until 17 November.

Steven’s work will also be on show in a group exhibition at The Left Hand, Braidwood, from 3 November. The show is open during three weekends from 3 November, 10 -5 at Lascelles Street Braidwood. 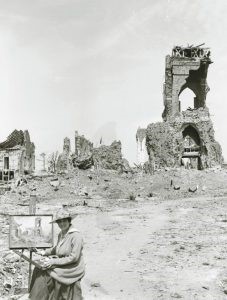 Australian artist Evelyn Chapman sits with her easel in the ruins of Villers-Brettoneaux, France. Picture: Courtesy of S.H. Ervin Gallery.

Evelyn Chapman (1888–1961) was an Australian painter and the first female artist to depict the devastated battlefields, churches and towns of the western front after the First World War. A respected artist, Chapman exhibited at the Salon in France but was forced to retire as a painter following her marriage; however, she continued to espouse art education and practice. Evelyn Chapman’s archive including artworks, photographs and correspondence between her and her daughter is held at the Art Gallery of NSW National Art Archive.

The Evelyn Chapman Trust, established by the bequest Pamela Thalben-Ball, Chapman’s artist daughter, will award a scholarship of $50,000 to support a young Australian painter by furthering their art education both in knowledge and artistic practice. The artist receiving the award will use the scholarship overseas or in Australia, at a recognised and well-established art school or work at an organisation on a program or project that enhances the artist’s artistic skills.

Edith Clancy - 6 minutes ago
Jacqueline Stuart and yourself xx View
Linda Bruce - 7 minutes ago
Wonderful and well deserved 🙏🍾 View
Moka Kim - 17 minutes ago
Fantastic He does so much for the community. View
Sport 14

Daniel Pickering - 2 hours ago
Legend. Taught me at Melba high back in the day. A great mentor! View
Ramon Montero - 3 hours ago
I do remember him when started arbitrate football, indeed very polite and educated a young person. I had the privilege to mee... View
Kacey Butterworth - 15 hours ago
I feel extremely privileged to have had Ben as a mentor, teacher and year co-ordinator throughout my high school years. He ta... View
Community 41

Ol L - 4 hours ago
If it’s not a museum then why have so many artefacts on display? Surely a very somber and minimal display of artefacts woul... View
Kerry Apted - 15 hours ago
Tiger Fit it's irrelevant what you see it as unfortunately. They're not "trying to turn it into a museum", it's already a mus... View
Tiger Fit - 15 hours ago
Kerry Apted that's not how I see it View
Opinion 1

The National Capital Authority has approved early works to support the $500 million expansion of the Australian War Memorial, despite...
News 36

It's been a tough and frustrating year at the Canberra Raiders for coach Ricky Stuart, but being named in today's...
Motoring 33

@The_RiotACT @The_RiotACT
Areas of Civic are a disgrace and completely out of character with a modern planned city like Canberra. It's time the neglect ended, says Ian Bushnell https://t.co/jwSVzqWoKc (1 hour ago)