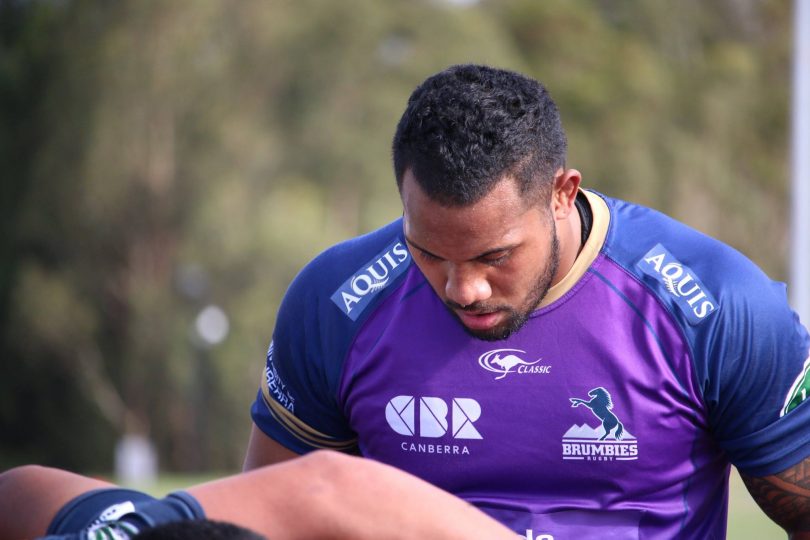 Fakaosilea has been picked at openside flanker in one of several changes to the Brumbies’ squad. Photo: Supplied by Brumbies.

Brumbies coach Dan McKellar has called on Lolo Fakaosilea to add energy and physicality to the forward pack on Friday night when the Brumbies attempt to end Melbourne’s unbeaten start to the season.

Fakaosilea has been picked as openside flanker in one of several changes to the Brumbies’ squad for what looms as an important match against Rebels at AAMI Park, who sits atop the Australian conference.

Left out of the side that travelled to Japan in round two, Fakaosilea put his hand up for selection against the Rebels after coming off the bench against the Reds last weekend.

“I have been working hard all throughout the preseason and last week when I had the opportunity to play against the Reds, obviously Dan has seen something there and put a bit of belief in me. I’ll take it with two hands and make the most of it.”

“After the preseason we just had, I think the whole squad is feeling fit including myself so I’ll just get out there and do my job.”

McKellar has made two changes to the starting line-up that was defeated by the Reds in a disappointing performance in Queensland.

Wallaby prop forward Scott Sio has recovered from the calf injury and is named in the front row in place of Ben Alexander while Fakaosilea replaces Tom Cusack in the starting XV.

McKellar said the Brumbies staff haven’t rushed Sio back into the side but the team needs to be realistic about his capabilities returning from his injury lay off.

“Sio is a world-class loosehead prop but we need to be realistic. Scott is coming back from an injury and he had a bit of time against the Chiefs in a trial game. I just want him to do the basics really well and it starts with scrum. We were disappointed with our scrum against the Reds and it wasn’t at our standard and we understand we need to be better.”

Folau Faingaa is set to make his Super Rugby debut from the bench, with the 22-year-old sensation already touted as a future Wallaby by Test coach Michael Cheika.

Fakaosilea said he is trying to keep his room-mate Faingaa grounded ahead of his debut.

“We are all behind him, trying to keep him grounded and calm because he has been nervous and couldn’t sleep last night. It’s a big opportunity for him, no doubt he will take it with both hands and do the jersey well.”

The Brumbies will be intent on a good start against the Rebels, who have scored two bonus-point wins to start their year, destroying the Reds and the Sunwolves to sit at the top of the Australian conference.

The Brumbies travel to Melbourne to take on the Rebels at AAMI Park this evening before returning to Canberra Stadium for their first game of the year on March 17. The match will be screened live on Fox Sports at 7.45 pm.

Treena Loiterton - 26 minutes ago
Geoff Richardson what about dumping every single record about war/defence on the steps of the memorial and getting them to ke... View
Richard Grainger - 4 hours ago
That building is simply storage. The cost that the Archives desperately need funding for is to digitise the records. A lot of... View
News 64

Ray Ez - 57 minutes ago
Tiger Fit so no memorials for anyone?? Did you think that maybe this sort of thing helps a lot of veterans? View
Ray Ez - 58 minutes ago
Ian Pearson you do understand the consultation was not a vote? They asked for people’s opinions. They are under no obligati... View
Ian Pearson - 1 hour ago
Concur - while Stalin might have said that numbers have a quality of their own, presumably the NCA did not agree. View
Business 1